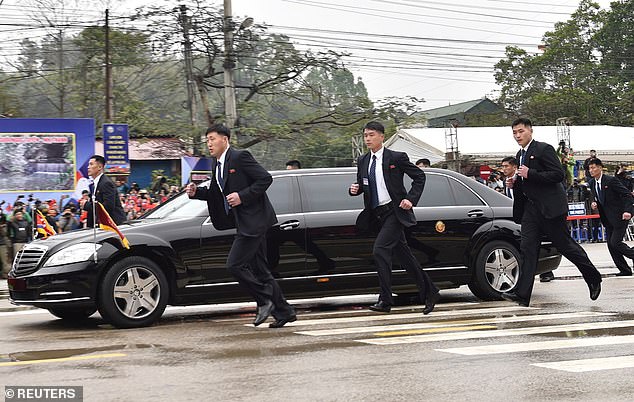 Kim’s pursuit of a nuclear program that stands on the verge of viably threatening targets around the planet. Soldiers, police and international journalists thronged the streets outside Hanoi’s Melia Hotel where Kim was set to stay, and hundreds of eager citizens stood behind barricades hoping to see the North Korean leader. As Vietnamese, North Korean and U.S. flags fluttered in a cold drizzle, dozens of cameras flashed and some citizens screamed and used their mobile phones to capture Kim’s rock-star-like arrival at the hotel. “I like him,” local resident Van Dang Luu, who works at a nearby bank, said of Kim. “He is very young and he is very interesting. And he is very powerful,” she said. “Trump is not young, but I think he is very powerful.” Vietnam’s authoritarian leaders set up a huge security apparatus to welcome Kim, shutting long stretches of highway and locking down swaths of the bustling capital city. Earlier in the morning, Kim, grinning broadly and waving, stepped off his armored train at the end of a long ride that started in Pyongyang and wound through China to the Vietnamese border. He shook hands with officials as Vietnamese troops in crisp, white uniforms and black boots stood at attention on a red carpet at the normally-sleepy Dong Dang railway station on the China-Vietnam border. Local official Hoang Thi Thuy said she had waited in the cold rain since before dawn for a glimpse of Kim, the first North Korean leader to visit fellow one-party state Vietnam since his grandfather Kim Il Sung in 1964. “I was so excited when we were told to stand in place for the arrival of the train,” she told AFP. “We saw the leader from afar. I felt so happy, it’s hard to describe.” Hours ahead of his border crossing, footage from Japanese TV network TBS showed Kim taking a pre-dawn smoke break at a train station in China, a woman who appeared to be his sister, Kim Yo Jong, holding a crystal ashtray at the ready. Kim’s arrival comes as Vietnamese officials scramble to finish preparations for a rushed summit; they have shared few details about the specifics of a meeting that the world will be watching closely. Trump was flying to Hanoi from Washington and set to arrive later Tuesday. Although many experts are skeptical Kim will give up the nuclear weapons he likely sees as his best guarantee of continued rule, there was a palpable, carnival-like excitement among many in Hanoi as the final preparations were made for the meeting. There were also huge traffic jams in the already congested streets.

What are your thoughts on this? Kindly leave a comment