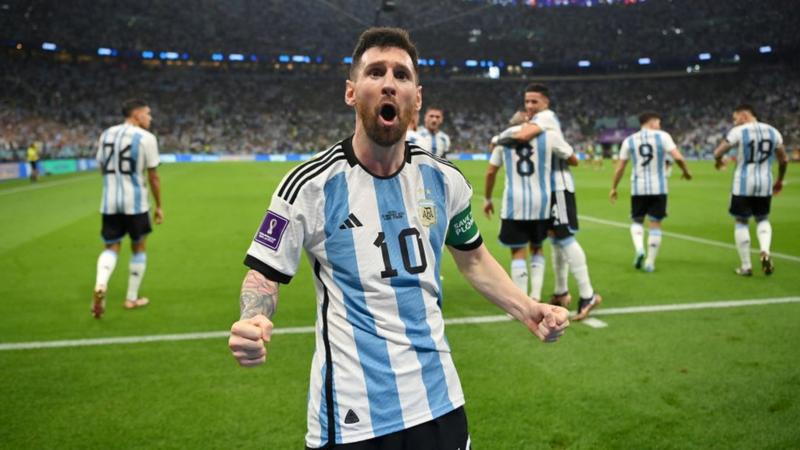 In a cauldron of noise at Lusail Stadium, Messi and Argentina knew defeat would end their hopes of reaching the last 16 after only two games following the stunning loss to Saudi Arabia in their opener.

The tension was mounting as Mexico frustrated Messi in an attritional game, especially in a first half littered with fouls and stoppages that never allowed Argentina to gain any momentum.

Messi changed all that after 64 minutes when he took one touch to control a pass with his left foot before drilling an unerring finish past Mexico keeper Guillermo Ochoa into the bottom corner from 20 yards.

The masses of Argentina supporters in a crowd of 88,966 went wild in celebration and relief as their World Cup campaign got back on track.

Enzo Fernandez added a superb second with a curling shot into the top corner three minutes from time but it was Messi who made the breakthrough and the difference. Kylian Mbappe scored twice for France as the defending champions laid down a World Cup marker by beating Denmark to become the first team into the knockout stage.

The forward stole the show once again with second-half strikes to take his side through. Lewandowski, who missed a penalty in Tuesday’s goalless draw with Mexico, was visibly emotional after ending a run of four World Cup games without finding the net.

Lewandowski’s late strike ended Saudi Arabia’s hopes of building on Tuesday’s remarkable victory over Argentina and boosts Poland’s chances of reaching the last 16 for the first time since 1986, when they were beaten 4-0 by Brazil in the first knockout round.

Czeslaw Michniewicz’s team need just one point against Argentina on Wednesday to qualify from Group C, while Saudi Arabia face Mexico for a place in the last 16. Australia forward Mitchell Duke dedicated his match-winning goal against Tunisia to his son and said it is “a moment I will hold very dear for the rest of my life”.

Duke took advantage of a positive start by Australia when he superbly flicked Craig Goodwin’s cross into the far corner to put them 1-0 up after 23 minutes.

That sparked an outburst of jubilant celebration from the small contingent of Australia fans behind the goal, which momentarily silenced the hostile and unwavering support for Tunisia.

Knowing defeat would mean an early exit from the World Cup, Australia held on to the narrow lead that keeps alive their hopes of qualifying for the last 16.