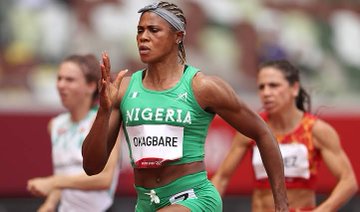 Blessing Okagbare has been banned for 10 years for multiple breaches of the World Athletics Anti-Doping Rules.

The former African 100m champion got withdrawn from competing at the 2020 Tokyo Olympics after a result of her testing came out positive for a banned substance. The AIU handed down a ban of five years for the presence and use of multiple prohibited substances.
Also, another five years for her refusal to co-operate with the AIU’s investigation into her case.
The AIU said it collected the sample from Okagbare during an out-of-competition test on July 19.
It further revealed the WADA-accredited laboratory that analysed the sample notified the AIU of the adverse analytical finding. Earlier, a man linked with Okagbare became the first man to be charged to court for allegedly providing performance-enhancing drugs to athletes competing in last summer’s Tokyo Olympics.

Furthermore, Okagbare can appeal against the Disciplinary Tribunal’s decision at the Court of Arbitration for Sport (CAS) within 30-days.