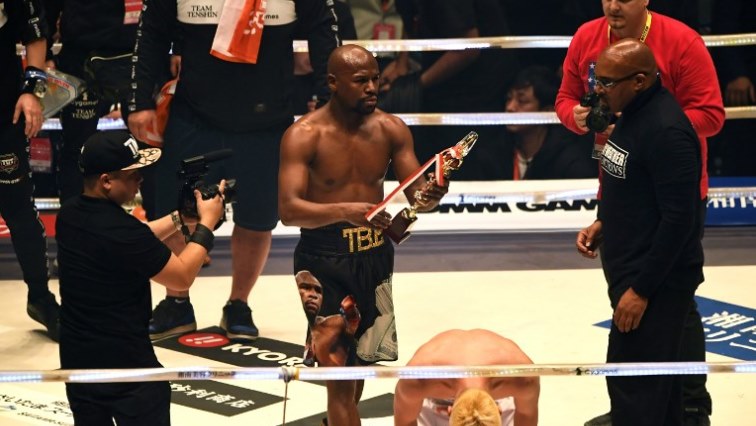 Floyd Mayweather came close to the new year (2019) by beating Japanese kickboxing phenomenon Tenshin Nasukawa by a technical knock-out on Monday in the first round of a New Year’s Eve “exhibition” following his comeback from retirement.

Mayweather floored Nasukawa, a kickboxer less than half his age, three times in the first round of the three-round contest before the Japanese fighter’s trainer rushed in to stop the fight. Mayweather was declared the winner after the inability of his opponent to continue the fight was confirmed. However, the veteran American boxer has won all the fights he was involved in, recording 50 wins without a loss in his career including high profile Philippine boxer Manny Pacquiao in May 2nd, 2015. Mayweather also made about $220 million from his May 2015 fight with Pacquiao and at the time posted a photo of a $100 million check — his guaranteed purse from the bout. The 41-year-old  has two wins since facing Pacquiao: against Andre Berto in 2015 and his August 2017 knockout of Conor McGregor in the UFC star’s boxing debut. Mayweather said after the McGregor bout that “this was my last fight.” The Westgate Las Vegas SuperBook has posted odds on the potential matchup, with Mayweather listed as a minus-220 favorite and Pacquiao at plus-180. The fight must take place by Dec. 31, 2019, for these bets to count.

Following his career statistics and progress, does the 41-year-old looks likely to bow to any defeat despite his come back from retirement? let’s have your opinions on this