Should Luke Shaw write his own Manchester United obituary? 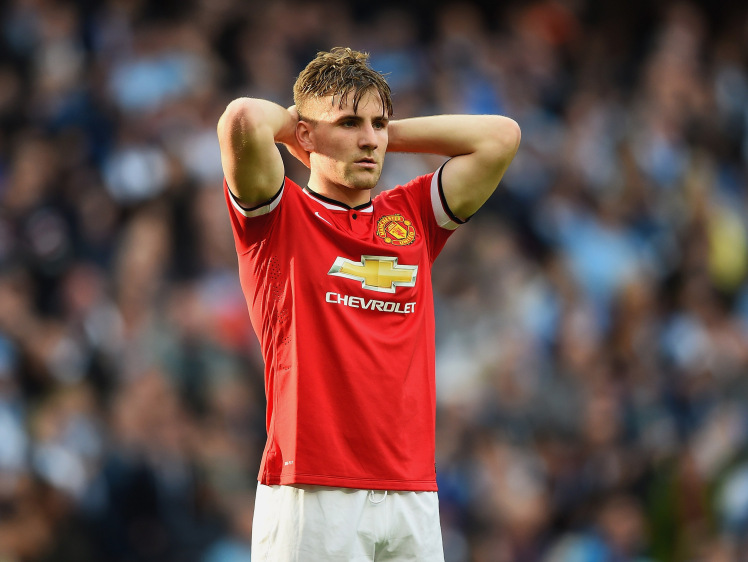 Bundesliga side Wolfsburg are surprise candidates to sign left-back Luke Shaw from Manchester United. Shaw recently suggested that he will hold off from penning a new contract at Old Trafford for the time being, leaving him with less than 12 months to run on his existing terms.
United boss Jose Mourinho has used Shaw regularly throughout pre-season due to others being away, but the Portuguese is said to be willing to cash in on the 23-year-old. Wolfsburg are the latest side to have made their interest known, though the Englishman is unlikely to take up the offer of kickstarting his career abroad. Shaw will instead focus on winning over Mourinho, it is claimed, before then deciding whether to extend his contract at Old Trafford or leave on a free next summer.

The obituaries for Luke Shaw‘s career at Manchester United have been written plenty of times in the past but this time it feels final.
Mourinho’s public castigation of Shaw is by no means an isolated outburst. Throughout his 20-month spell at Old Trafford, Mourinho has regularly taken pot-shots at Shaw, questioning his quality, application, fitness, desire and basic understanding of the game. Even on occasions when Shaw has played well, Mourinho has found a way to undermine him. When Shaw delivered a promising display as a substitute against Everton last April, Mourinho took credit: “He [Shaw] had a good performance but it was his body with my brain. He was in front of me and I was making every decision for him.”

Mourinho’s latest admonishment of the 22-year-old left back is said to have stunned his teammates with The Telegraph claiming that some United players feel like Shaw is being “bullied” by their manager. There is only so much criticism a player can take and while United took the option to extend Shaw’s contract by a year until 2019 in January, it looks as though a parting of the ways in the summer is inevitable. It would be a damned shame for all involved. Shaw was widely heralded as the long-term solution to United’s left back problem upon his £27m move from Southampton in 2014, a deal incidentally which made him the world’s most expensive teenage footballer. The hype was justified too.

Gary Neville, someone who knows a thing or two about what it takes to be a Manchester United full back, fully endorsed the move after working with Shaw on England duty, saying at the time: “You have to watch him at close hand to realise that this is an incredible and hugely talented football player. Luke Shaw is fantastic.”

Nearly four years on from that move, though, and Shaw has amassed just 62 matches in a Manchester United shirt – a tally which is five fewer than he managed in two full seasons with Southampton. Injury problems partially explain why Shaw’s appearance numbers are so low. He spent 11-months on the sidelines after suffering a horrific double leg fracture against PSV in the Champions League back in September 2015 and inevitably his comeback was compromised by a few minor injuries.

However, more tellingly his lack of appearances during Mourinho’s time in charge have generally been due to being out-of-favour rather than unfit to play. Of the 110 matches that Mourinho has presided over, Shaw has been available for all but 25. He has played in just 34 (40 per cent) of them. For whatever reason, Shaw’s face just hasn’t seemed to fit, which seems odd considering Mourinho wanted to sign him for Chelsea in 2014 before he opted for United instead. While there have been the occasional snippets of praise from his manager and the odd run of games here and there, Shaw hasn’t been able to establish himself. Now 22, Shaw needs to rediscover the form that saw him named in the Premier League PFA Team of the Year as an 18-year-old. But if Old Trafford isn’t the place for him to realise his undoubted potential than where is?

Tottenham has regularly been touted as the perfect destination for Shaw to go to given the presence of his managerial mentor Mauricio Pochettino, not to mention their current status as top of the table challengers in the Premier League. That Danny Rose has been linked with a move to Manchester United makes a swap deal between the pair an obvious solution for all parties. Chelsea, who Shaw supported as a boy, could be another option. As could a return to Southampton – depending on whether they survive the drop.

Regardless of where Shaw ends up, though, he should take some solace in the fact that plenty of other players have proven themselves elsewhere after falling foul of Mourinho’s methods. He doesn’t have to look far for inspiration either. On the other side of Manchester, Kevin De Bruyne has been the architect of Manchester City’s (inevitable) romp to the Premier League title while down the M62 in Liverpool, Mohamed Salah is drawing comparisons with Lionel Messi following a sensational debut campaign at Anfield. The pair are locked in a battle to win the PFA Player of the Year award and both were offloaded by Mourinho during his time at Chelsea. If Shaw does leave United, it is up to him to follow in their footsteps by making a mockery of Mourinho’s judgement.