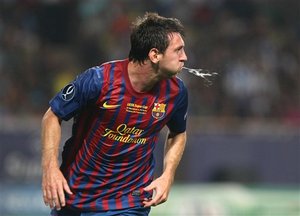 Barcelona stars Lionel Messi, Jordi Alba, Sergio Busquets and Gerard Pique all crashed out of the 2018 FIFA World Cup at the round of 16 stage with Argentina and Spain respectively and have been on extended break since. The summer holidays are now over for the trio who have resumed training with Barcelona ahead of the start of the new season.

FC Barcelona have had mixed fortunes in recent seasons. They’ve been extremely successful domestically, winning four out of the last six La Liga titles, and utterly dominating in the competition which has almost turned into their personal playground: the Copa Del Rey (They have won it four times on the trot). However, it is in the Champions League, which is the ultimate test of European royalty that they have faltered. They have been eliminated at the quarter-final stage of the competition in each of the last three editions, in embarrassing fashions to Italian clubs in the last two.

What has made their European woes more painful is the fact that their Spanish and eternal rivals Real Madrid have been so glaringly successful in Europe, winning the Champions League in each of the same three editions that Barcelona had been eliminated at the quarter-final. It is a bitter pill to swallow, the Blaugrana are one of Europe’s most decorated sides, winning La Liga on 25 occasions, and triumphing in Europe’s premier club competition five times, so Barcelona will be seeking to end the Champions League malaise as soon as possible.

Regardless of the trying period the club finds itself in at the moment, it is still FC Barcelona, European royalty and the only club to have won all six major trophies in a year, and won a double treble (2009, 2015). The club has won the Champions League a total of five times, winning four in the last 10 years, and appearing in numerous semi-finals in that time-frame.

They still possess some of the most gifted players in the world, superstar world class footballers such as Luis Suarez, Gerard Pique, Jordi Alba, Ivan Rakitic, Philippe Coutinho, Samuel Umtiti, who have won almost everything there is to win in football. The Blaugrana go into any tournament as one of the favorites to win it, on virtue of their history and the caliber of players they possess, thinking otherwise because of their recent struggles is foolhardy.

Barcelona also has Messi within its ranks, the diminutive Argentine’s status as one of the greatest players of all time is not in doubt, neither is his innate ability to turn games around in favor of his team when the chips are down. With him, any team in the world fancies its chances of winning any competition they participate in, and Barcelona is not an exception.

After prolonged negotiations lasting two transfer windows, Coutinho finally arrived at Barcelona from Liverpool, in a £142 million deal last January, making him the third-most most expensive player of all time behind Neymar and Kylian Mbappe. Despite initially struggling, Coutinho later settled into the team, and put in some match-winning performances as Barcelona wrapped up proceedings in their stroll towards league glory.

It is well-known what Philippe Coutinho is capable of, having witnessed his world class abilities in the Premier League with Liverpool, and it was on evidence of those performances that Barcelona shelled out such a huge amount to get him, as they saw him to be the long-term replacement for the aging Andres Iniesta.

Coutinho further reemphasized his prowess with a dominant World Cup performance, lifting Brazil in the place of Neymar. Coutinho is yet to make a significant impact on the Champions League, having only a handful of appearances with Liverpool and Inter Milan, and so will be eager to stamp his authority on the biggest club stage where world class players deliver era-defining performances, and this will aid Barcelona mightily in their hunt for European glory.

After total European dominance in recent seasons, Real Madrid are in a state of transition, following the sale of Ronaldo to Juventus, and the resignation of Zinedine Zidane as coach, and the team might struggle in the coming season. This will be a blessing to Barcelona, because Real Madrid is the biggest threat to their quest to win the Champions League, owing to the familiarity between both clubs in La Liga and Real Madrid’s recent pedigree in the competition. If Real Madrid fail to perform to their usual high standards in the Champions League, then Barcelona would have one less contender to worry about.

Lionel Messi is an extraordinary footballer and one of the greatest players in history, who has scored over 600 career goals and has won 32 trophies in his career. He has won numerous personal awards, including a joint-record 5 Ballon d’Ors with his rival Cristiano Ronaldo.
However, like his club Barcelona, Messi has underperformed in Europe in recent seasons. Messi had a then-seemingly unassailable 4-1 Ballon d’or lead over Cristiano in 2012, but the Portuguese’ determination has seen him close the gap on Messi, equal it and on evidence of his performance last season, likely surpass him.

Messi hasn’t won the Ballon d’or since 2015, and woefully failed to inspire his nation Argentina in its quest to end a 25-year wait for a major trophy at the World Cup in Russia. Messi is a wounded lion right now, seeking to claim back his lost pride, and like a determined man on a mission, there could be almost no stopping him, which will ultimately favor Barcelona.