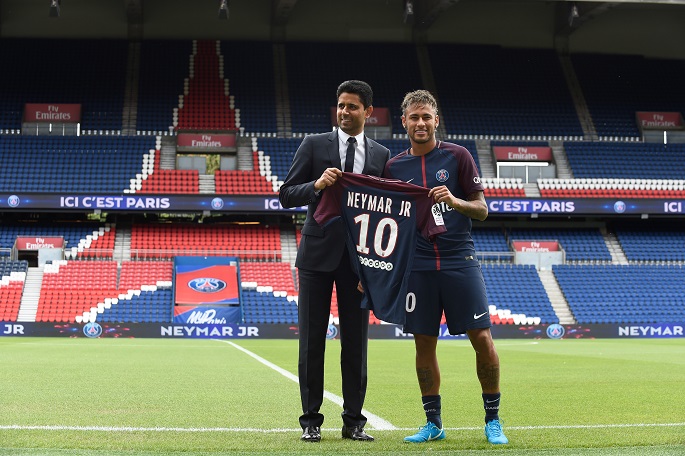 Paris Saint-Germain forward Neymar has brought an end to speculation linking him with a sensational summer move to Real Madrid. Neymar, 26, left Barcelona to join the Ligue 1 giants last summer for a world record fee but the forward has been relentlessly linked with a return to Spain. That speculation has heightened since Cristiano Ronaldo’s move to Juventus with the Brazil international said to be sat top of a list of potential replacements that also includes PSG teammate Kylian Mbappe and Chelsea forward Eden Hazard.

Real president Florentino Perez is said to be ‘obsessed’ with the idea of bringing Neymar to the Santiago Bernabeu and reassured supporters at a press conference on Wednesday the squad will be ‘strengthened by some brilliant players.’ But the former Santos sensation has now committed his immediate future to the French capital. ‘I am staying, I am staying in Paris. I have a contract,’ Neymar said at a charity event in Sao Paulo.

‘The press was feeding this and making up stories. They end up speculating too much. The topic is boring, but everyone knows how fond I am of the president [PSG president Nasser Al-Khelaifi], for the country and the fans.’ Real have also sought to calm speculation over their interest in Neymar, releasing a statement earlier this month insisting no approach had been made.
The club said: ‘The two clubs enjoy an excellent relationship and, as such, if Real Madrid were at any stage to consider securing the services of a PSG player, they would approach the club in the first instance.’ Neymar won the domestic treble during his first season in France, scoring 28 goals and providing 16 assists in all competitions despite missing the final three months of the campaign with a metatarsal injury.