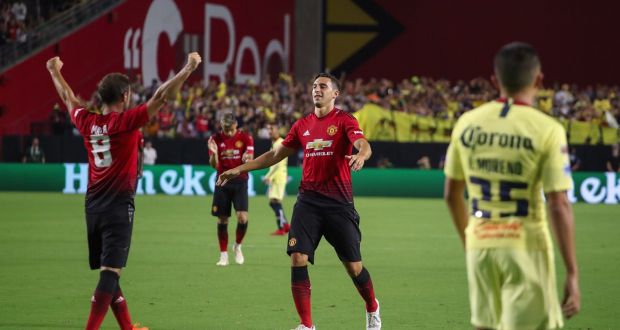 Manchester United were held 1-1 by Mexican side Club America in their opening pre-season match in Phoenix on Friday morning. United had to come from behind against the Mexican side as Juan Mata’s 78th-minute strike cancelled out Henry Martin’s opener on 59 minutes.
The Premier League side were without many key players after the World Cup. Paul Pogba, Romelu Lukaku and English duo Jesse Lingard and Marcus Rashford were among those missing. David de Gea, Nemanja Matic and new Brazilian signing Fred are expected to join the team next week. Alexis Sanchez is also due to join the team shortly in the United States after resolving his visa issues. The Chile forward, who accepted a 16-month suspended jail sentence in February for tax fraud, missed the start of the tour as he was unable to get a US visa.

Manchester United manager Jose Mourinho said Thursday’s 1-1 pre-season draw with Club America in Arizona “pushed us to levels we are not prepared for”. Both sides had to contend with hot conditions as temperatures reached 40C, and Mourinho told MUTV: “They were a team with intensity and quality so it was a good training session for us.”

United’s preseason campaign got underway at the University of Phoenix Stadium and a few things were learnt.

Bringing in a 35-year-old goalkeeper from Stoke is not the most glamorous signing, but that doesn’t mean it is not a clever move. United need three first-team goalkeepers, but Joel Pereira, last season’s No. 3, needs to go out on loan and play games. United fans should already know that Grant is a capable goalkeeper after his heroics in Stoke’s 1-1 draw at Old Trafford two years ago. And he underlined his credentials again on his debut against Club America, making two good saves to make sure the score was 0-0 at half-time. He will know that with David De Gea and Sergio Romero at the club he will not play that many games. Still, it was a good start, and so far, his arrival looks to be a good piece of business.

The idea of sending young players on loan is that it helps them improve. It doesn’t always work out like that, but in Mitchell’s case, it seems to have done the trick. He impressed at Hearts during the second half of the season. So much so, in fact, that they want him back. He played as a left wing-back at Hearts after being converted from a left winger by United academy chief Nicky Butt. He was back in his old position against Club America — Luke Shaw started at left-back — but he didn’t seem fazed at all. The 21-year-old was key to United’s bright start in Phoenix, laying on one good chance for Anthony Martial. He was quieter after half-time, but only because, understandably, fatigue had kicked in. He will have done enough to impress Mourinho, who faces a decision about whether to keep him at Old Trafford next season or let him leave on loan again.

In the absence of Romelu Lukaku and Marcus Rashford, Martial started up front and was unlucky not to end with a goal. There will continue to be speculation about his future until he addresses what his agent, Philippe Lamboley, said earlier in the summer, but he didn’t look like someone who is desperate to go. He was sharp and dangerous until he was replaced midway through the second half. It bodes well for Mourinho, who has all but confirmed the Frenchman will start the season as his central striker if, of course, he is still with the club. If it’s a lack of games that is making the 22-year-old consider his options, he should get a run in the team early on in the campaign, starting with Leicester’s visit to Old Trafford on Aug. 10. Then it will be up to him to prove he should keep his place.

It says everything about Darmian’s situation at Old Trafford that even with a threadbare squad in the United States, he still started on the bench. Antonio Valencia and Shaw were picked at full-back, with the Italian forced to settle for a place among the substitutes. There was not a lot wrong with his performance when he did come on, but he is clearly down the pecking order. If he wants to play regularly, he will need to leave. Sources have told ESPN FC there is interest from Juventus and Inter Milan, but nothing was close enough to prevent the 28-year-old from travelling to the U.S.

It is still far too early to tell if Chong is going to be a star or not — something Mourinho alluded to in his postmatch news conference — but he has made a good start to his senior career. The highlight was his wicked cross in from the right that set up Mata’s goal, but there was plenty more to be impressed by, too. He was brave when he had the ball at his feet, happy to run at defenders instead of looking for a more simple option. Still only 18, he has work to do, particularly physically, but he looks like he might be the real deal.