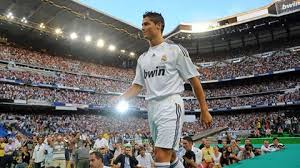 here is a strong memory I have from when I was 7 years old. It is so clear to me that I can picture it right now, and it makes me feel warm. It has to do with my family. I had just started playing real football. Before, I was just playing in the streets of Madeira with my friends. And when I say the street, I don’t mean an empty road. I really mean a street. We didn’t have goals or anything, and we had to stop the game whenever the cars would drive by. I was completely happy doing that every day, but my father was the kitman for CF Andorinha — and he kept encouraging me to go and play for the youth team. I knew it would make him really proud, so I went.

The first day, there were a lot of rules that I didn’t understand, but I loved it. I got addicted to the structure and the feeling of winning. My father was on the sidelines at every match with his big beard and his work trousers. He loved it. But my mother and my sisters had no interest in football. So every night at dinner, my father kept trying to recruit them to come see me play. It was like he was my first agent. I remember coming home from the matches with him and he’d say, “Cristiano scored a goal!”

They would say, “Oh, great.” But they didn’t really get excited, you know? Then he would come home the next time and say, “Cristiano scored two goals!” Still no excitement. They would just say, “Oh, that’s really nice, Cris.” So what could I do? I just kept scoring and scoring. One night, my father came home and said, “Cristiano scored three goals! He was unbelievable! You have to come see him play!”

But still, I would look to the sidelines before every match and see my dad standing there alone. Then one day — I will never forget this image — I was warming up and looked over and I saw my mom and sisters sitting together on the bleachers. They looked … how do I say this? They looked cozy. They were kind of huddled close together, and they were not clapping or yelling, they were just waving to me, like I was in a parade or something. They definitely looked like they had never been to a football match before. But they were there. That’s all I cared about.

I felt so good in that moment. It meant a lot to me. It was like something switched inside of me. I was really proud. At that time, we didn’t have much money. Life was a struggle back then in Madeira. I was playing in whatever old boots my brother passed down to me or my cousins gave me. But when you’re a kid, you don’t care about money. You care about a certain feeling. And on that day, this feeling, it was very strong. I felt protected and loved. In Portuguese, we say menino querido da família.

I look back on the memory with nostalgia, because that period of my life turned out to be short. Football gave me everything, but it also took me far away from home before I was really ready. When I was 11 years old, I moved from the island to the academy at Sporting Lisbon, and it was the most difficult time in my life. It’s crazy for me to think about now. My son, Cristiano Jr., is 7 years old as I’m writing this. And I just think about how I would feel, packing up a bag for him in four years and sending him to Paris or London. It seems impossible. And I’m sure it seemed impossible for my parents to do with me.

But it was my opportunity to pursue my dream. So they let me go, and I went. I cried almost every day. I was still in Portugal, but it was like moving to another country. The accent made it like a completely different language. The culture was different. I didn’t know anybody, and it was extremely lonely. My family could only afford to come visit me every four months or so. I was missing them so much that every day was painful.

Football kept me going. I knew I was doing things on the field that the other kids at the academy couldn’t do. I remember the first time I heard one of the kids say to another kid, “Did you see what he did? This guy is a beast.” I started hearing it all the time. Even from the coaches. But then somebody would always say, “Yeah but it’s a shame he’s so small.”

I started sneaking out of the dormitory at night to go work out. I got bigger and faster. And then I would walk onto the field — and the people who used to whisper, “Yeah, but he’s so skinny”? Now they would be looking at me like it was the end of the world.

When I was 15, I turned to some of my teammates during training. I remember it so clearly. I said to them, “I’ll be the best in the world one day.” They were kind of laughing about it. I wasn’t even on Sporting’s first team yet, but I had that belief. I really meant it.

When I started playing professionally at 17, my mother could barely watch because of the stress. She would come to watch me play at the old Estádio José Alvalade, and she got so nervous during big games that she passed out a few times. Seriously, she passed out. The doctors started prescribing her sedatives just for my matches.

I started dreaming bigger and bigger. I wanted to play for the national team, and I wanted to play for Manchester, because I watched the Premier League on TV all the time. I was mesmerized by how fast the game moved and the songs that the crowds would sing. The atmosphere was so moving to me. When I became a player for Manchester, it was a very proud moment for me, but I think it was an even prouder moment for my family. At first, winning trophies was very emotional for me. I remember when I won my first Champions League trophy at Manchester, it was an overwhelming feeling. Same thing with my first Ballon d’Or. But my dreams kept getting bigger. That’s the point of dreams, right? I had always admired Madrid, and I wanted a new challenge. I wanted to win trophies at Madrid, and break all the records, and become a club legend.

Over the past eight years, I have achieved incredible things at Madrid. But to be honest, winning trophies later on in my career has become a different kind of emotion. Especially in these last two years. At Madrid, if you don’t win everything, other people consider it a failure. This is the expectation of greatness. This is my job.

But when you are a father, it is a completely different feeling. A feeling that I cannot describe. This is why my time in Madrid has been special. I have been a footballer, yes, but also a father.