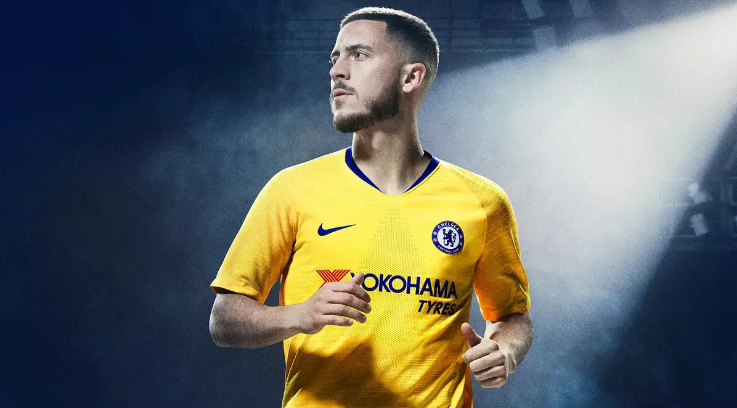 Chelsea have released their away kit for the 2018-19 season, with Nike taking the Blues back to a yellow strip for the first time since 2015.
Eden Hazard, N’Golo Kante, Gary Cahill and Fran Kirby are the Chelsea stars to model the latest strip. Chelsea first wore yellow in 1963, with the kit becoming more famous in the 1970s.
Nike have also added a few flourishes to reflect the club’s history, with the lion from the club crest sitting on the jersey neckline.
Around that sits the phrase ‘Football is the game’ – the second line of the club’s anthem – with the first line, ‘Blue is the colour’, found on the new home jersey. Chelsea are set to wear the strip for the first time on July 28, when they take on Inter Milan in the International Champions Cup.

The yellow jersey and shorts are complemented by a pair of rush blue socks which feature a yellow band across the shin.
First worn in 1963 and made famous in the ’70s, Chelsea’s classic yellow change stripe returns this season for the first time since the 2014/15 season. In so doing, it helps celebrates the club’s past moments through a modern energy as the club ushers in a new era.
On the jersey neckline sits a lion from the club crest. Around it reads, “Football is the game,” the second line of the famous Chelsea anthem. “Blue is the color” is the first line, which features in the home jersey, providing continuity between home and away kits. The custom Knit Tape along the back neckline of the jersey allows improved stretch ability across the kit, enhancing players’ movement and agility.
The new 2018/19 Chelsea away kit will be worn for the first time on July 28.