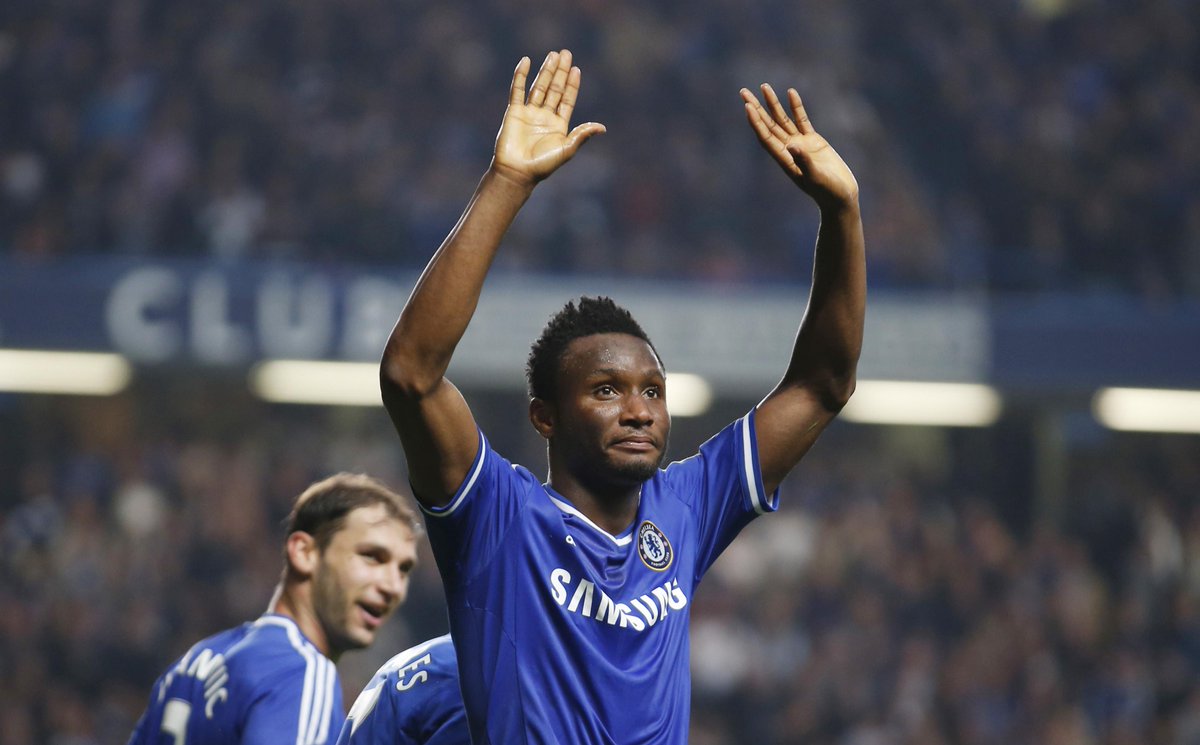 Chelsea have taken out time to reminisce on one of their greatest ex-players, Super Eagles captain, John Obi Mikel, posting a compiled video of the midfielder in action for the Blues on Twitter. Mikel’s move to Stamford Bridge back in 2006 was embroiled in one of the greatest transfer controversies as Manchester United already had an agreement in place with Mikel. The 31-year old who is currently on the books of CSL club, Tianjin Teda eventually spent 12 solid years with the club, winning two Premier League titles, the UEFA Champions League, Europa League and a host of other honours.

The 2013 African Cup Of Nations winner has always been enthusiastic about his former employers and that the club holds a special place in his heart — no surprise why he was well a fan favourite during his time there. Mikel had honed his talents with well known Pepsi Football Academy before joining Lyn Oslo in Norway in 2004.

In the summer of 2005, Mikel again starred for his country at youth level in the 2005 FIFA World Youth Championships, helping Nigeria to the final when they lost 2-1 to Argentina. Following the tournament, Mikel failed to return to Lyn Oslo, and the club lodged a complaint with FIFA. On 12 August 2005, FIFA ruled that Mikel should return to Lyn Oslo to see out his contract with the Norwegian club, whilst they would decide at a later date whether the contract he signed with United should be upheld or cancelled. After a delay of over a month, Mikel complied with the FIFA decision and returned to Lyn Oslo in early September 2005 after a three month absence.
Rather than leaving FIFA to determine the validity of the contract signed with Manchester United, Chelsea intervened by volunteering to settle the transfer saga through negotiation with Lyn Oslo and Manchester United.

On 2 June 2006, Chelsea, Manchester United and Lyn Oslo reached a settlement to resolve the future of the player. Mikel’s registration was to be transferred from Lyn to Chelsea; Manchester United agreed to terminate their option agreement with Mikel. Under the terms of this agreement Chelsea agreed to pay Manchester United £12 million, half paid upon the finalisation of the contract and the other half in June 2007, and Lyn £4 million, half payable immediately and half in June 2007. As a result of this settlement, all claims in this matter were withdrawn. On 19 July 2006, Chelsea were granted a work permit for the midfielder after they completed the £16 million signing in June 2006.

Having made his debut against Liverpool in the Community Shield, Mikel impressed on his first start for Chelsea on 27 September 2006, in the UEFA Champions League against Levski Sofia. However, the Nigerian’s early career was characterised by indiscipline both on and off the pitch. He was sent off in a match against Reading on 14 October 2006, and was fined on three separate occasions by Chelsea for turning up late to training. At the time, Chelsea manager José Mourinho was believed to have strong reservations about his lifestyle outside of Stamford Bridge and the club were reportedly considering offloading the player. Mikel was dropped for over a month.
During Chelsea’s triumph in the League Cup Final in 2007 against Arsenal, Mikel was sent off in injury time (having come on as a substitute) after clashing with Kolo Touré, the incident was followed by a huge fracas, in which Touré and Emmanuel Adebayor of Arsenal were sent off, Cesc Fàbregas and Frank Lampard were booked, with managers José Mourinho and Arsené Wenger also involved.

After improved punctuality and showings at training sessions, Mikel scored his first goal for Chelsea in their 6-1 FA Cup victory over Macclesfield Town on 6 January 2007. He also scored against Nottingham Forest in the following round of the competition. In subsequent games, Mourinho deployed Mikel as a starter in a holding role in key games where he impressed greatly. Mikel’s height and great strength, allied to good ball control and an unusually wide range of passing, allows him not only to disrupt opposing attacks but also to spread the play effectively. With Claude Makélélé coming towards the end of his career, Mikel was widely tipped to be his successor in defensive midfield.

Mikel’s development continued with 39 appearances in all competitions during the 2007-08 season. Following the departure of Claude Makélélé in the summer of 2008, Mikel was presented with the opportunity to make the defensive midfield position his own during the 2008-09 season. His main rival for the role, Michael Essien, could play elsewhere and was injured for much of the season. Mikel impressed during his extended run in the side. Mikel made 49 appearances in all competitions over the course of the season and played every minute of the 2009 FA Cup Final. Mikel was nominated for the club player and young player of the season, and on 22 July 2009, he signed a new five-year contract with Chelsea.

During another season in which Michael Essien was largely absent due to injury, Mikel continued to play an important role in defensive midfield during the 2009-10 season under new manager Carlo Ancelotti. He made 35 appearances in all competitions, helping Chelsea to the League and FA Cup Double, which included the first Premier League winners’ medal of the young midfielder’s career. The 2010-11 season was much less successful for the Blues. Mikel continued to appear regularly in the defensive midfield role, making 37 appearances to pass the 200-appearance mark by the end of his fifth season at the club.

At the start of the 2011-12 season Mikel’s father was kidnapped in Nigeria but was released unharmed a few days later.
When Mourino returned for a second spell ahead of the 2013-14 season, he re-found his goalscoring touch, breaking a six-year drought whilst notching his first-ever Premier League goal in a win over Fulham. Mourinho’s departure midway through the 2015-16 season saw Hiddink return to Stamford Bridge for a second spell as Interim Manager and, once again, the Dutchman relied heavily on Mikel’s steadying influence in midfield.

However, when Antonio Conte was hired in the summer of 2016, the Nigerian found himself on the fringes of the first-team squad once again, falling behind Nathaniel Chalobah in the midfield rotation. Without an appearance to his name by Christmas, he agreed to a deal with Chinese Super League side Tianjin TEDA in January, bringing to an end more than a decade of service at Chelsea in which he won every major honour available to him.