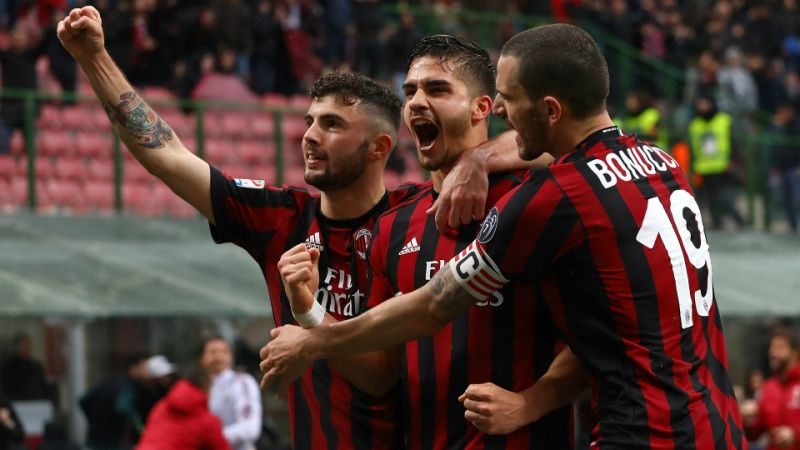 AC Milan to compete in Europa League as CAS overturn Uefa ban for Financial Fair Play breach. Uefa’s Adjudicatory Chamber of the Club Financial Control Body banned the Italian giants from the competition for a year after breaching financial fair play rules. But the Serie A side yesterday appealed that decision in front of the Court of Arbitration for Sport in Lausanne.

Now the three judges have decided to overturn that decision with immediate effect. Milan had sent a ten-person delegation team to CAS to fight the punishment. And in a hearing that lasted over ten hours, that saw club CEO Marco Fassone questioned for two hours, they have secured the desired result. Uefa announced the ban last month after an investigation under its FFP regulations, in particular the break-even requirement.

It said AC Milan had not provided sufficient evidence of its financial stability. But with new ownership now in charge at the San Siro, the Rossoneri have successfully overturned that sanction. Meanwhile, Chinese businessman Li Yonghong, the former owner of the club, is under investigation in Italy for alleged false accounting, according to reports.

It’s claimed the Italian tax police had asked the club and its auditors to see documents regarding the acquisition of AC Milan by Li. Li bought the Serie A club last year from former Italian Prime Minister Silvio Berlusconi with the help of US hedge fund Elliott. The fund assumed the control of the club some weeks ago after Li failed to repay Elliott his debts.

The CAS Panel rejected AC Milan’s request to order UEFA to enter into a settlement agreement but acknowledged that the decision of the Adjudicatory Chamber of the UEFA CFCB to exclude AC Milan from the UEFA Club Competition was not proportionate. The Panel considered that some important elements have not been properly assessed by the Adjudicatory Chamber, or could not be properly assessed at the moment when the Appealed Decision was rendered (19 June 2018), and noted in particular that the current financial situation of the Club was now better, following the recent change in the Club’s ownership.
The Panel decided to refer the case back to the Adjudicatory Chamber of the UEFA CFCB because the Club had requested that the case be referred back to UEFA and because it considers that the Adjudicatory Chamber is in a better position than the CAS Panel to issue a new proportionate disciplinary measure on the basis of the current financial situation of the Club. The Panel has issued its decision without the grounds, which will follow at a later date.