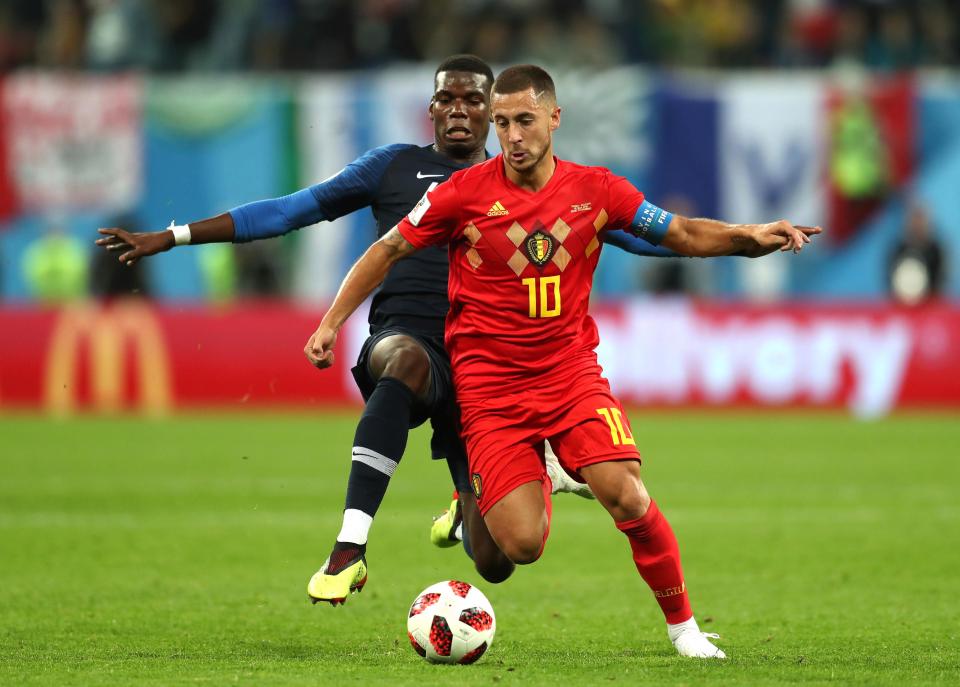 The 2018 World Cup delivered entertainment until the very last. As ever, a number of players did their reputations no harm. With attention now inevitably switching to the transfer window, here are 10 players who have seen their value increase significantly thanks to their impressive performances in Russia this summer.

Eden Hazard, Belgium and Chelsea
Eden Hazard has made no secret of his interest in a potential move to Real Madrid following Belgium’s exit from the World Cup. Chelsea fans can at least take solace from the fact his value will have risen even further this summer. The Belgium captain led by example in Russia with three goals, two assists and more dribbles than any other player (40). He was the most consistent attacking player at the World Cup – and our player of the tournament.

Thomas Meunier, Belgium and PSG
Belgium’s progress at the World Cup came to an end when Thomas Meunier was not in the side, which is no coincidence. He was extremely important to Roberto Martínez’s side at both ends of the pitch and he was missed in the semi-final defeat to France. World class full-backs are at something of a premium and the 26-year-old was one of the best in Russia, scoring one goal and providing two assists. He went into the tournament after a frustrating season at PSG but his performances may have convinced new manager Thomas Tuchel that he should take over from Dani Alves as first choice. If Meunier does leave Paris, he will be of interest to various clubs across the continent.

Denis Cheryshev, Russia and Villarreal
A lack of first-team opportunities in La Liga last season meant Denis Cheryshev was not a starter when the hosts kicked off the first game of the tournament against Saudi Arabia. An injury to Alan Dzagoev gave the winger the chance to impress and, boy, did he take it. With four goals in 304 minutes of action – including some superb strikes – the 27-year-old may be angling for a move this summer. Villarreal would be wise to profit on a player who started just nine of his 24 league appearances last season.

Harry Maguire, England and Leicester
Just how much is Harry Maguire’s sizeable head worth? Considerably more than it was before the World Cup. The centre-back was one of England’s best-attacking weapons this summer and, beyond his threat from set pieces, the 25-year-old showed great composure and endeavour to bring the ball out from the back. He only moved clubs a year ago, so any offers for Maguire would probably have to be a lot more than the £17m Leicester paid Hull City last June.

Yerry Mina, Colombia and Barcelona
Yerry Mina, a defender who had just as big an impact from set pieces as Maguire, is likely to put a disappointing six-month spell at Barcelona behind him. The Colombia international only arrived at Camp Nou in January but he is already being linked with an exit, with Clement Lenglet’s arrival from Sevilla pushing him closer to the door. Barcelona will have been pleased to see the centre-back score in all three of his appearances at the World Cup and they will now hope to make a significant profit on a player who started just four league games last season.

Raphaël Varane, France and Real Madrid
A four-time Champions League winner and now world champion to boot, Raphaël Varane has very little still to win in the game at the age of just 25. It’s surprising, then, that his tally of 27 league starts last season was the highest of his career. While injuries and competition have been the cause of that inconsistency, Varane has been mooted with a move for a number of years. His performances at the World Cup may have made him the most expensive centre-back in the game.

Benjamin Pavard, France and Stuttgart
Two years ago Benjamin Pavard had just signed for Bundesliga II club Stuttgart and was watching Euro 2016 in a fanzone with his friends. He was drafted into France starting line-up at the end of last season due to an injury to Djibril Sidibé and was forced to play out of his favoured centre-back position on the right of the back four. The 22-year-old ended up playing a pivotal role in their world title. He scored a goal-of-the-tournament contender in a memorable match against Argentina and attracted widespread interest for his overall performances. Bayern Munich had hoped to secure Pavard’s services next summer by activating a release clause that is yet to come into effect, but Stuttgart may want to cash in now and make a substantial amount more than the £30m they would receive next year.

Sime Vrsaljko, Croatia and Atlético Madrid
Having failed to make the right-back place his own at Atlético Madrid, Sime Vrsaljko will have no shortage of suitors should the club wish to make a quick buck on the Croatia defender this summer. He had huge shoes to fill on the international stage but he channelled his inner Dario Srna during the World Cup and offered a real outlet down the right flank for the runners-up. His stamina and work rate were outstanding, especially against England.

Domagoj Vida, Croatia and Besiktas
Having only arrived at Besiktas on a free transfer in January, Domagoj Vida is likely to make the Super Lig club a pretty penny this summer. The 29-year-old struggled to hold down a starting place last season so the Black Eagles will surely look to exploit the spike in his value, even though they have already said goodbye to Serbia international Dusko Tosic already this summer. Liverpool are reportedly interested in signing Dejan Lovren’s international defensive partner for a reported £20m, with Besiktas tipped to hold out for even more than that.

Ivan Perisic, Croatia and Internazionale
It was no surprise to see Ivan Perisic performing so well in Russia but his growing influence for Croatia during the World Cup will have heightened Inter’s valuation of their winger. The 29-year-old has been a key player since arriving at Inter from Wolfsburg three years ago, forging a great understanding with star striker Mauro Icardi and having a direct hand in 52 league goals over the past three seasons. Rejuvenated interest from Manchester United this summer will not just be a consequence of his displays in Russia, but Inter will receive a boosted fee if they decide to sell.