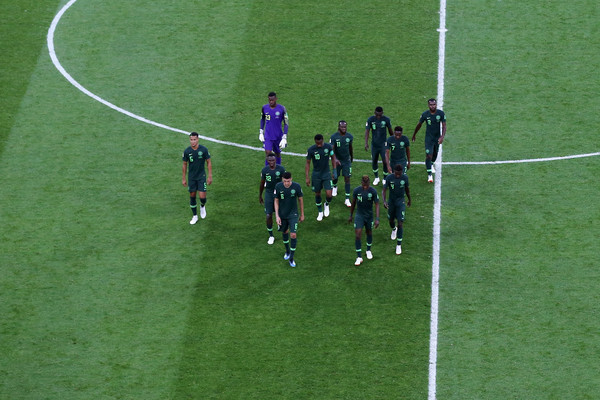 As many as twelve Nigeria internationals have seen their stock rise after starring for the Super Eagles at the recently concluded 2018 World Cup. According to Transfermarkt, Leicester City midfielder Wilfred Ndidi has the honour of being the most expensive Nigerian player at the moment with a market value of €25 million, followed by Chelsea ace Victor Moses at €20 million.

It has been recommended that interested clubs should pay €15 million to sign Arsenal winger Alex Iwobi, while Kenneth Omeruo is now valued at €1.75 million. Omeruo has been excellent on loan spells and could fit in perfectly at Leeds United. Leeds are short at the back. Last season proved that another defender is needed at Leeds, even if Kalvin Phillips appears set for a dual midfield-defensive role.
Omeruo showed at the World Cup this summer that he is more than adept at playing in a back-three. Nigeria’s performances improved greatly when he joined William Troost-Ekong and Leon Balogun in triumvirate at the back. Capable of playing at full-back as well the 40-cap international could be a great recruit for Leeds United this summer. Meanwhile, Chelsea’s new manager, Maurizio Sarri has given Kenneth Omeruo slim hope of a recall to The Blues’ mainframe, following a declaration by the Italian gaffer that the squad lacks depth in quality central defenders.

Apart from Super Eagles first choice goalie in Russia, Francis Uzoho, the two remaining goalkeepers that made the roster, Daniel Akpeyi and Ikechukwu Ezenwa, have seen their market value increase to €650,000 and €150,000 respectively. With World Cup experience now under his gloves, following full minutes of action in all of Nigeria’s three group matches, Uzoho appears set for greater things at club level, and is now training with the first team players at La Coruna. The 19-year-old UAE 2013 FIFA U17 World Cup Golden Eaglets-winning team’s reserve shot-stopper resumed training with the Deportivo First team, amidst reports that he has been contacted by some top clubs for a summer transfer deal.

Bursaspor defender William Troost-Ekong, who went the distance in all Nigeria’s three matches at the World Cup is now rated at €2m, Obi Mikel at €5.5m and Joel Obi €5m.