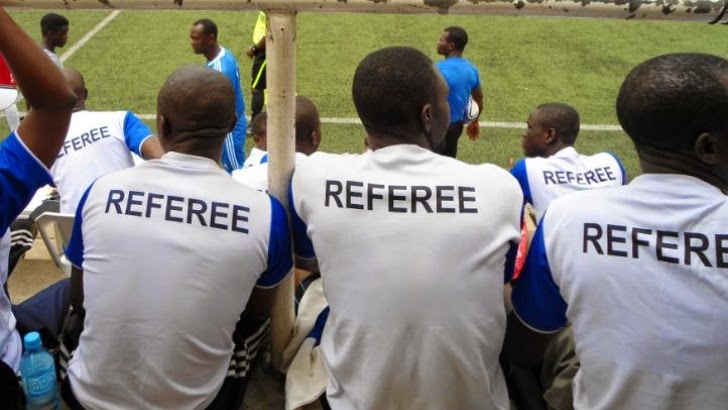 The Nigeria Referees Association has pleaded with President Muhammadu Buhari to wade into the leadership crisis in the Nigeria Football Federation to avert FIFA’s impending ban. The referees’ leadership made the call after an emergency meeting with the leaders of Nigeria Football Coaches and National Association of Nigeria Professional Footballers in Abuja on Wednesday. The President of NRA, Tade Azeez, who spoke on behalf of the group, told newsmen that the call for Buhari’s intervention became necessary to avert the looming FIFA ban.
“Without prejudice to the Supreme Court judgment which referred back the matter to the trial court to start a fresh and subsequent ex-partite order issued on June 5, and also aware that the constitution of Nigeria is the grand norm, we, however, wish to highlight the dangers of the current disputes. While taking into consideration the fact that NFF is an affiliate of FIFA, its worthy to note that football matters should not be taken to local courts, as the obvious implications may spell doom for Nigerian football and by extension the lives and career of its footballers if FIFA ban is imposed. Our pain and concern, just like millions of other sports-loving Nigerians is the consequences of the ban on the national team players and officials of Falconets who have already qualified for the U-20 Women’s World Cup. The Super Eagles who are in the final phase of Africa Cup of Nations qualifiers and are scheduled to play in August and September will also be affected.
Other effects of the ban will be the exclusion of Nigerian referees from CAF and FIFA activities and the exclusion of Nigerian clubs from continental championships like the CAF Champions League and the Confederation Cup. Nigeria can’t afford to be isolated from the global football family and put the lives and future of millions of Nigerian youths in jeopardy,” Azeez said.

He, therefore, called for an emergency congress of the NFF to be convened to address the problems in the country’s football. This, Azeez said, would open the space for all interested persons who want to contest for any position in accordance with the NFF statutes to do so. The three associations used the occasion to highlight the unfair treatment meted out to them by the leadership of the NFF. They urged the Congress of the NFF to as a matter of urgent importance consider the NRA, NANF and the coaches association as part of the NFF executive committee, as it was in the NFA statutes of 2008. The meeting noted that failure to restore these associations’ membership statutes in the NFF executive committee would relegate their members to the back door in the administration of football in Nigeria.