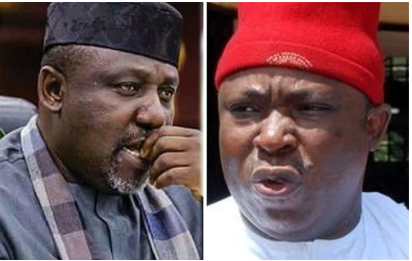 Governor Rochas Okorocha of Imo state, Thursday pleaded with Senator Victor Umeh, to stop channeling his frustration to Imo state. This is coming after Umeh described Okorocha as a trickster. However, for the past few days Okorocha and Umeh, have taken swipe at each other following the alleged plan to impeach the Deputy governor of Imo state, Eze Madumere. But Okorocha through a release to newsmen in Owerri, by his Chief Press Secretary, Mr Sam Onwuemeodo also challenged Umeh to publish his profile. According to the release, “In the latest attack, he called Governor Okorocha a trickster and also threatened to expose him. Our quick response goes this way; If there is anybody whose life story is zigzag, it is Chief Victor Umeh.

The life story of Governor Okorocha is a straight forward one right from Jos Plateau State until now. “He has never been associated with any shady deal. And his business life and his Political life Stories can be smoothly narrated without any gap and are also known by most Nigerians. “But Chief Umeh cannot make a similar claim. Let him publish his profile and let Governor Okorocha publish his own profile and let’s see whose story will be disjointed, and who is nobody until APGA came on board. “Governor Okorocha by all consideration, has succeeded as a governor following his monumental achievements in Imo, but Chief Umeh has failed as a Senator because he lacks all the capacities to fit into the Senate.

“Chief Umeh did his Youth Service in 1985 in Port-Harcourt and he should tell the world his story between that 1985 and 2002 when he joined APGA. Let him tell his story and let that of Okorocha be told side by side. He threatened to expose Okorocha. He has continued to make that threat since 2014 when Governor Okorocha left APGA to join the Merger that gave birth to APC. Chief Umeh should carry out his threat now or cover his face in shame. Who does not know the story of Rochas Okorocha in this Country, including his business, politics and so on. “Chief Umeh will continue to insult Superior people all in the name of APGA. Chief Umeh’s APGA could not produce even a Councillor in any other South-East State except Anambra which Ikemba Ojukwu made possible until Rochas came and broke the jinx. “And you may ask; is Imo the only State in the South-East? Why can’t Chief Umeh produce another governor in the South-East? “