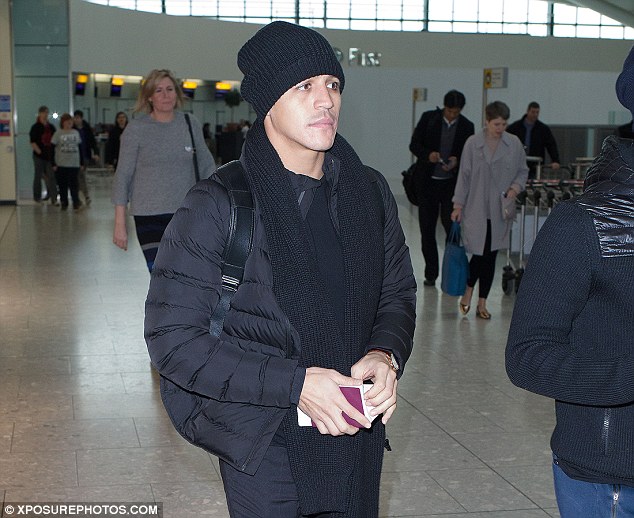 Alexis Sanchez was not part of the squad that flew from Manchester Airport to Los Angeles on Sunday due to a ‘personal administrative issue’, which related to a visa. But Sanchez has suggested that he will “soon” be on his way to the United States to join up with his Manchester United teammates on their pre-season tour.
The former Arsenal attacker had previously been handed a 16-month prison sentence for tax fraud, which saw the US government deny him a visa. While this is thought to relate to Sanchez accepting a prison sentence from Spanish authorities in February, the forward now has been granted a visa and so can now travel. A United spokesperson said: “Sanchez’s issue is all sorted and he will fly out to the USA very shortly.”

On Wednesday, United boss Jose Mourinho revealed that he was still hopeful the Chile international would be able to fly to the US before their matches in the International Champions Cup. Sanchez has now given a positive update on the situation from Carrington, with the 29-year-old posting an image with a caption which suggested that he would soon board a flight to the US.
“The last training in Manchester. Soon [American flag]”, read the selfie caption. He has resolved his visa issue and will fly out “shortly” to join Manchester United’s pre-season tour of the United States.

United will begin their pre-season preparations with a clash against Club America on July 20, before facing San Jose Earthquakes on Sunday night ahead of their first International Champions Cup match with AC Milan on July 26. Mourinho’s side face Club America in Phoenix on Thursday at 7pm local time, the opening game of the trip. They will then fly back to their LA base before travelling to San Jose to play the San Jose Earthquakes on Sunday, the second of a five-match stateside schedule.

Meanwhile, Coach José Mourinho has admitted Manchester United’s preparation for the new season is “very bad” because many of his senior players are resting after the World Cup. United are in California but Mourinho is without Sánchez, Paul Pogba, Romelu Lukaku, Marouane Fellaini, Marcus Rashford, Jesse Lingard, Marcos Rojo, Victor Lindelöf, Ashley Young, David de Gea, Nemanja Matic, Fred and Phil Jones. De Gea, Matic and Fred are due to join the squad next week before the third tour game against Milan in Los Angeles. Yet Mourinho said: “The pre-season is very bad. The positive thing is only for the young boys that have a fantastic opportunity to train with us. Next week will come De Gea, Matic and Fred which is good, especially for Fred.
“He is a new player with us but everything is really bad and then we go to the UK and have to play the Premier League. The broadcasters were not nice to us with the Friday match [against Leicester City on 10 August], which complicates more things. So I’m worried because I’m not training [with everyone] and then I go to the Premier League without lots of players. But it is what it is and we have to try and make the best out of it with the players we have here.”

Mourinho is also without Diogo Dalot, the 19-year-old full-back signed from Porto for £19m, because of injury. Mourinho was noncommittal regarding any further signings. “I’ve no idea. I’m not going to lie to you, I’m not going to say somebody is coming or nobody is coming.”
Pogba was a driving force in France’s World Cup triumph. Mourinho hopes the midfielder can finally replicate that form over a whole season. “I hope he understands why he was very good. That’s the point about his performance level and contribution to a winning team: it is to understand why he was so good especially in the second part of the competition, where he was absolutely brilliant.”

Luke Shaw has vowed to prove to Mourinho he should be the first choice left-back. “Of course, I’ll look at it like that,” he said. “The next five games [of the tour] are all about fitness, but I want to try and prove to the manager that I can be in his team, not just in these games.
“When everyone comes back and everyone is fit and ready, I still want to be that first name on the teamsheet. It’s time for me to show him over the next four weeks what I can do and why I deserve to be on this team.”