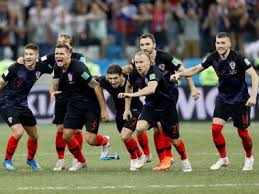 Croatia got off to a winning start for the first time at a World Cup since 1998 with a comfortable victory over Nigeria. An own goal from Nigerias Oghenekaro Etebo and a Luka Modric penalty did the damage, but Nigeria did actually finish the match having had more attempts than their opponents. The win in Kaliningrad put Croatia in a strong position after Argentina were held to a surprise 1-1 draw by Iceland in their Group D opener.

By far and away Croatias best performance at this World Cup came against two-time champions Argentina, who were blown away by Zlatko Dalics side. Goals from Ante Rebic, a thunderbolt from Modric and a late Ivan Rakitic goal gave Croatia a first victory over a South American opponent in World Cup history, and inflicted the heaviest World Cup first-round defeat since 1958 on a beleaguered Argentina. The victory meant Croatia sealed progression to the last 16 with a game to spare. People will realise they should respect Croatia, defender Dejan Lovren said after the game. If we are like today, through all the tournament, I believe we can go far.”

Despite making nine changes with their progression already secured, Croatia racked up three World Cup group victories for the first time with a narrow win over Iceland, scoring with both of their shots on target. Milan Badelj gave the Croatians the lead in the second half but his goal was cancelled out by Iceland’s Gylfi Sigurdsson, who scored a penalty. Substitute Ivan Perisic hit the winning goal in the 90th minute, to ensure than Croatia topped Group D by a colossal five points.

This was no classic. After two very quick-fire goals only the second match in World Cup history where both teams scored inside four minutes – extra time was needed to separate these two. As the 120th minute approached, the match was labouring towards a penalty shootout, until a brilliant Luka Modric pass set Ante Rebic through, with the pacey forward winning a penalty. Modric stepped up to take it, only to see Kasper Schmeichel make a brilliant save.

In the shootout, Modric redeemed himself, converting his spot kick, but it was goalkeeper Danijel Subasic who was the hero, becoming only the second goalkeeper to save three penalties in a shootout at the World Cup to earn his side victory.

Croatia needed nerves of steal once more to book a first semi-final spot since 1998, as well as boundless energy to counter a Russia side with the support of a nation behind them in Sochi. Denis Cheryshev’s curler for Russia was cancelled out by Andrej Kramaric within the 90 minutes, before Domagoj Vida looked to have headed the winner in extra time. Mario Fernandes late equaliser took the game to penalties though, where Danijel Subasic was again the hero, making one save, and watching another wide as Croatia became the first side to win two penalty shootouts at a World Cup since Argentina in 1990.

Having fallen behind early on to Kieran Trippiers sizzling free-kick, Croatia rarely looked like getting back into the match in the first half. But Ivan Perisics 68th-minute equaliser turned the match on its head, and from then on, it looked like there was only going to be one winner. Perisic thundered a strike against the post in normal time, before England goalkeeper Jordan Pickford made a stunning stop to deny Mario Mandzukic in extra time. However, Croatias leading marksman was not kept out for long, as he latched onto Perisics flick to fire home what proved to be the winner as Croatia booked their first ever spot in a World Cup final.