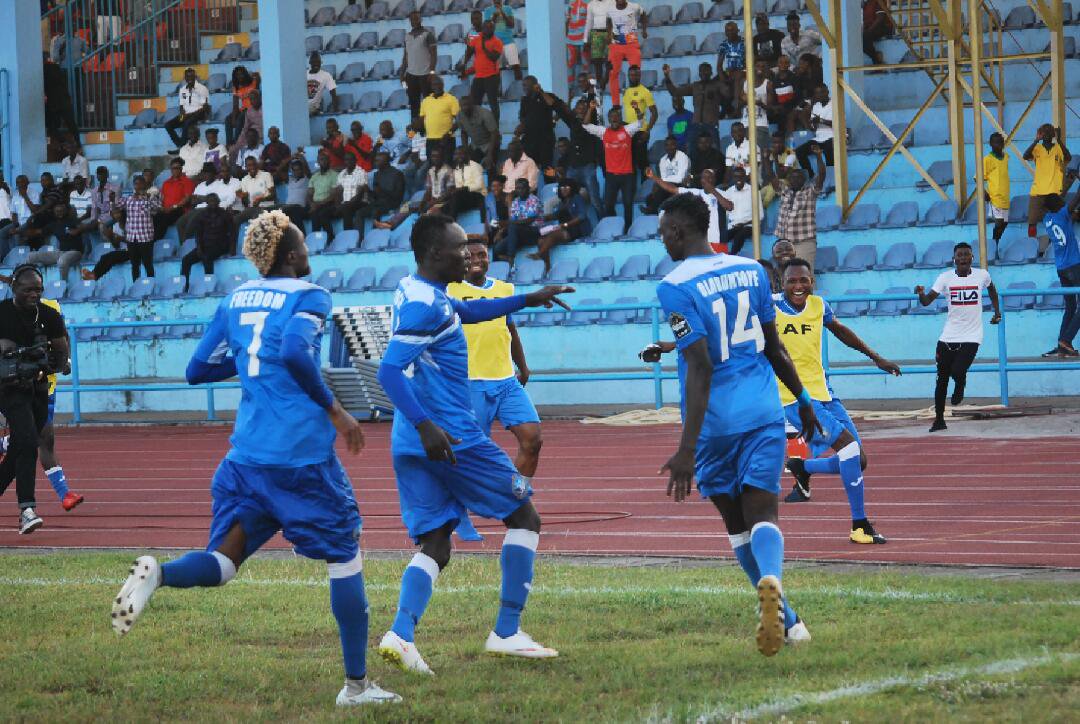 Nigeria’s lone survivor in continental club competition, Enyimba FC of Aba, moved to the top of Group C of the CAF Confederation on Wednesday. The two-time African champions Enyimba beat Williamsville Athletic Club of Ivory Coast 1-0 in their third group match of the 2018 CAF Confederation Cup played at the Adokiye Amiesimaka Stadium, Port Harcourt. It was the second consecutive win by the Nigerian side, though CARA Brazzaville could topple them at the summit later tonight if they defeat Djoliba in Bamako. The Ivorian challengers WAC drop to second on four points.

Going into the game, the seven-time Nigerian champions needed a win to brighten their chances of progressing from the group to the knockout stages. The hosts dominated the opening minutes of the game and created scoring chances. Enyimba claimed the lead as early as the seventh minute, as Ibrahim Mustapha showed great speed, power and composure to race clear of the defence before calmly sending a low shot past the goalkeeper.

Williamsville then dominated the rest of the half forcing Enyimba to defend and rely on counterattacks. The visitors created chances with Nigerian Folorunsho Olatunji going close with a header for the Ivorians but they went into the break one goal behind. Williamsville almost replied midway through the first half as Irie Zan Bi sent a header on target and the ball took a nasty bounce off the churned turf in the penalty area – goalkeeper Fatau Dauda had to react sharply to tip it over the bar. Just past the half hour mark the visitors blew a great chance to draw level: a cross from the right picked out Folorunsho Sesan, who got up high and sent a downward header toward goal, but was unlucky to see the ball bounce just wide of the mark. WAC remained the better team through to halftime, but were unable to find an equaliser, while Enyimba suffered an injury blow to Ibenegbu Bartholomew, who was replaced by Chinedu Udeagha.

The second half saw the People’s Elephant put in a more controlled display, though they were unable to find a second goal to truly put the game to bed, while the Ivorians struggled to make headway in attack against the excellent duo of Akabueze John and Nelson Ogbonnaya. Enyimba fought to increase the lead but the visitors also forced Enyimba keeper FatauDauda to make some fine saves as they sought the equaliser. Former Enyimba player Victor Ezeji said the People’s Elephant have to do more to progress from the group.
“Enyimba did well today (Wednesday) to get the three points after they lost their last match in Brazzaville. But they need to play better than they did today because Williamsville dominated the game and could have got a point from it,” he told Supersport. Enyimba travel to play Williamsville in Abidjan on July 29. They will be away to Malian side AC Djoliba on August 17 before hosting CARA Brazzaville on August 29.

In the other game in the pool, Djobila moved into second place with a comfortable 2-0 home win over CARA Brazzaville. Goals either side of halftime from Mamadou Cisse and Mahamadou Coulibaly sealed the three points for the home side. Enyimba head the group, followed by Djobila and Williamsville AC on four points, with CARA on three.

Raja Casablanca moved to the top of Group A after an excellent 1-0 away win at ASEC Mimosas. It took a penalty 15 minutes from time via Mahmoud Benhalib to give the visitors the three points, while ASEC finished the match with 10 men after a red card for goalkeeper Abdoul Cisse. Cisse received his marching orders for connecting with an opponent as he tried to punch the ball clear, and having used all of their substitutes already, striker Issa Sanogo had to go in goal. Benhalib converted the spot-kick and Raja comfortably held on for the remainder of the game. Ghana’s Aduana Stars claimed a vital 2-1 win over AS Vita Club in the other match in the pool, with all the goals scored in the opening 26 minutes. Stars were 2-0 up early through strikers Bright Adjei and Yahaya Mohammed, but when Glody Ngonda pulled a goal back for the DR Congo side it was game-on. Vita Club was not able to force an equaliser though and Raja top the pool with five points, followed by Stars and Vita Club with four each, and ASEC with three.

Moroccan side Berkane remains top of Group B despite being held at home by Egyptian club Al-Masry following a 0-0 stalemate. Al-Hilal misses the opportunity for three precious points when they let a two-goal lead slip to draw 2-2 at home to Mozambique outfit UD Songo. The Sudanese side seemed destined for the win when Mohamed Bashir and Thomas Ulimwengu gave them a first-half lead.
But Malawian Frank Banda pulled a goal back for the Mozambicans, who found an equaliser three minutes from time via former Orlando Pirates forward Hélder Pelembe. Berkane leads the pool with seven points, followed by Al-Masry (five), Al-Hilal (two) and Songo (one).

USM Alger consolidated their position at the top of Group D with a 2-1 away success at Rayon Sports thanks to a very late strike from Abdelraouf Benguit. Mali forward Ismaïla Diarra had put the Rwandans ahead, but Farouk Chafaï equalised in first-half stoppage time and Benguit grabbed a 93rd-minute winner. Striker Ephram Guikan scored twice as Kenyan side Gor Mahia thumped Young Africans 4-0, with their other strikes coming via Jacques Tuyisenge and a Mwinyi Mngwali own goal. USM Alger has seven points and head the pool, followed by Gor Mahia (five), Rayon Sports (two) and Young Africans (one).