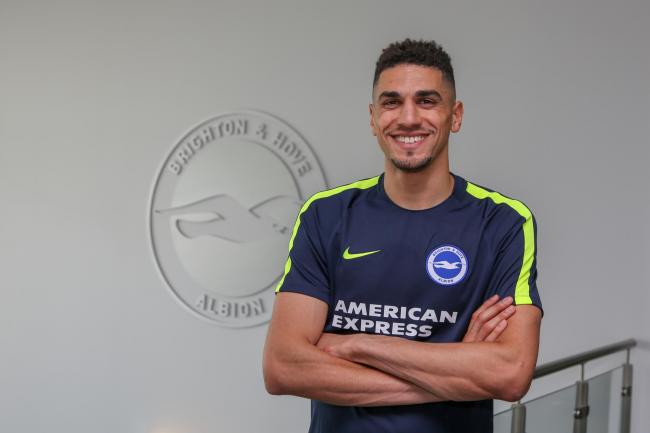 Brighton & Hove summer signing Leon Balogun has reflected on his experience during his maiden appearance at the World Cup with Nigeria in Russia. Four years ago, the central defender was in the running to be included in the Super Eagles World Cup roster but an injury he suffered on his debut against Mexico ended his dreams of playing in Brazil.

”The injury made the summer more special because a lot of people were wondering whether my career as an international player would come to an end,” Balogun said to Brighton’s official website. ‘The fact that not many people expected me to be there made me happier and it made it more special. I was able to share the occasion with my parents and played against the best player in the world in my opinion [Lionel Messi] – the fans were fantastic, and the atmosphere was amazing, so it provided me with many priceless memories.”

Although the defender admitted that the early exit of the Super eagles hurts, he is thrilled with his involvement in the tournament. The defender, who turned 30 at the global football showpiece, featured prominently for the Super Eagles as they bowed out in the group stage of the tournament. And following the disappointing exit of the three-time African champions, the former Mainz 05 player took to the social media to express his delight at the ‘invaluable experience’ gained on the biggest stage of football.

“Better late than never, but never late is better. It’s been two weeks since this exciting journey has ended for my team and me. Reminiscing it’s still painful, I won’t lie,” Balogun posted on Instagram. “But life goes on and it gives you so many reasons to smile. Meanwhile, I turned 30 (thanks for all the messages), am about to start a new chapter in Brighton and there will be a new world champion soon making their nation proud. I will be forever grateful for this invaluable experience with the Super Eagles. So this is to say thank you to my team, the complete staff, to everyone who was part of this great journey and supported us also to Russia and its people for their great hospitality. And last but not least, thank you Nigeria for the endless support. It’s been a great honour representing you and we hope we could make you proud. We will continue to strive for greatness in the future so one day we can hopefully bring a trophy back home.”

He also recalled his invitation to the national team, saying that late Stephen Keshi helped kickstart his international career. Balogun spoke of an unexpected phone call from Keshi served as the catalyst for his membership of the Eagles team. The defender, who is of mixed nationality, said playing for Germany was not an option because there were many players that were “ahead of me”.
Balogun disclosed, “people started writing about me… then Stephen Keshi heard of me and I think it was in 2014 when he first called me”.
“I picked up the phone, I heard the voice it was calm. He said, ‘hello Balogun, you know who this is? I said no sir. He said this is Stephen Keshi. How are you, my son? And I was like ‘wow’, it’s about to go down.’ 2014, I was supposed to be in the squad already but the first call-up against Mexico, I got subbed in, then broke my foot after 20 minutes run. That was why I missed the World Cup in 2014.”

Balogun said he was an emotional wreck when Nigeria beat Zambia to qualify for the World Cup.
“When we qualified against Zambia, the moment I heard the final whistle, I just broke down in tears. Because it means so much to me. It’s a childhood dream,” he said. “When we were little kids, when we are playing on the playground, we say this is the World Cup. Everyone will be in one team and if you are in the final, you will be the World champion. So, now I can really compete against the best of the best in the world.”

Balogun started training with his new teammates at Brighton & Hove on Wednesday ahead of the new Premier League season. The Nigerian international defender Leon Balogun joined Premier League club Brighton & Hove Albion from Bundesliga side FSV Mainz. He signed a two-year contract with the Seagulls after becoming available on a free transfer. Brighton boss Chris Hughton told the club’s official website: “I am delighted to welcome Leon to the club. He will add more depth to our defensive options, and I am pleased to get our first piece of business done so early in the summer. He is in the peak years of his career and I’m sure he will integrate well into the squad. He also has valuable experience having played in the Bundesliga, the Europa League and at international level.”
He has also represented the likes of Hannover, Werder Bremen, Fortuna Dusseldorf and Darmstadt in his club career.