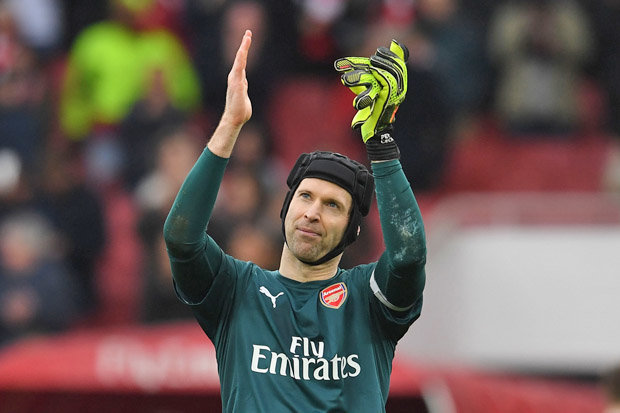 Arsenal have reportedly decided that they are open to selling goalkeeper Petr Cech during the summer transfer window. Cech has spent the last three years at the Emirates Stadium with 117 appearances being made in all competitions, but the arrival of Bernd Leno from Bayer Leverkusen is expected to relegate the 36-year-old to the bench. Former club Chelsea are said to be considering a surprise move for Cech and Arsenal may be willing to part ways with the veteran. The Gunners are unlikely to operate with three experienced goalkeepers next season, meaning that either Cech or David Ospina are likely to be allowed to find a new club in the coming weeks. Ospina is said to be keen on a switch to Besiktas, leaving new boss Unai Emery with a decision to make regarding his backup for Leno.

The Czech international left Stamford Bridge for the Emirates Stadium in 2015, a year after Courtois was recalled from his loan at Atletico Madrid. The 36-year-old won four Premier League titles in west London after signing for the Blues in 2004. He enjoyed three years as Arsenal’s No.1 under Arsene Wenger, but now faces losing his place after new Gunners boss Unai Emery signed Bernd Leno from Bayer Leverkusen. Petr Cech is now being linked with a sensational return to Chelsea as the Blues look for a replacement for the outgoing Thibault Courtois.

Thibault Courtois is on his way to Real Madrid — it is a move that he has wanted for some time. His family and children still live in Madrid and, with a year left on his contract, he holds all the power; Chelsea need to sign a replacement and have earmarked Allison of Roma as a possible target; Liverpool have reportedly made an offer for Allison and are the favourites to sign him; and Joe Hart sits on his todd at Manchester City desperately waiting for someone, anyone, to want him. And Arsenal have already made their big move, signing Bernd Leno for approximately £20 million a month ago exactly on Thursday.

The arrival of Leno means that the Gunners will look to offload one of the current shot-stoppers already at the club. With the continued development of Matt Macey, the return of Emiliano Martinez from a year-long loan at Getafe, Unai Emery now has four goalkeepers to choose between, and that is before Leno is welcomed into the fold. At least one, if not two, will leave, either on a permanent or temporary basis.

Petr Cech seemed happy to stay and fight for his place, he offers much greater experience as the reserve goalkeeper to aid Leno’s adaptation to the Premier League, and Ospina has many unavoidable and critical flaws. But reports in the media are now claiming that Cech is being offered to Chelsea, his former club, as they search for a Courtois replacement amid fears that they are set to miss out on Allison.