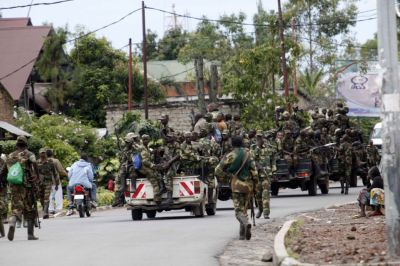 Similarly, a soldier, identified as Saeed Sabo, of the 82 Division, Nigerian Army, Enugu, is now cooling off in police cell for allegedly stabbing a middle-aged man to death in Umuahia.

Following the military raid of Amangwu community, scores of locals were also reportedly arrested and are yet to be sighted.

The community has been reportedly deserted as locals fled to different locations, abandoning their homes just to stay out of trouble.

Vanguard gathered that the invasion was in the aftermath of an alleged abduction of a yet-to-be-identified soldier, said to be ” on pass in the area”.

The soldier, according to reports, was said to be on leave, and visited his village in nearby Ikwun in Cross Rivers State but got missing at the border between Amuma Ohafia and Amangwu.

It was learned that troops from 14 Brigade were deployed for a rescue operation on the missing soldier.

The soldiers allegedly burnt over 50 houses in the community, while 10 persons were killed, with many others missing.

Sources told Vanguard that the soldiers had also invaded Okon and Amuma with heavy shooting and broke into houses to arrest some youths.

His words: “The problem was with our neighbouring community, Amangwu, but the Army invaded Okon yesterday and burnt 5 houses. They were shooting  everywhere. Some of them were using drones to take pictures of the community.

”They returned by 2 am today and burnt another house. They broke into houses and dragged youths into their vehicles. Any youth arrested is tagged a member of IPOB.

”The youths arrested are yet to be seen since their arrest. People are fleeing their homes to the IDP camps. We are now IDPs in our place. We are afraid they may storm the IDP camp in search of youths.”

A resident of Amangwu who spoke on the condition of anonymity, alleged that the number of youths killed in the community was above 20, contrary to the 10 reported by the media.

He said: “What soldiers are doing in Amangwu community amounts to ethnic cleansing. If any youth has committed an offence, the soldiers should arrest him, not burn houses and kill people.

”Everybody arrested is tagged a member of IPOB. Many youths have been killed. Even families who fled Amangwu have been searching for their loved ones. Those whose houses were burnt couldn’t save anything because the soldiers came in the early morning when the residents were still sleeping.

”Some people were lucky to escape through the bush path because the Army blocked the area searching for people. Amangwu is now a ghost town.”

Efforts to contact the Army Public Relations Officer, 14 Brigade, Ohafia, Lt. Innocent Omale, were unsuccessful as he did not respond to calls and a text message was sent to his mobile number unreplied.

However, a top military source in the Brigade told Vanguard that soldiers were currently on operation in Ohafia, fighting the rising insecurity in the area, but denied burning houses and killing innocent people.

The  source, who pleaded not to be quoted, confirmed that there was a military operation in the community in search of the missing soldier, and against criminal elements who had allegedly taken over the area.

The source denied the killing of locals and destruction of houses, explaining that only shrines used by criminals were destroyed.

Said the source: “There is an ongoing operation in search of a missing soldier in Amangwu general area. Only shrines belonging to the criminals in the enclaves were affected.

”The Nigerian Army is a professional Army that respects law-abiding citizens and fishes out those with criminal intent disrupting the peace-loving people of Ohafia and its environs.

“We must fish out the criminals in our immediate society for peace to reign.”

On the justification for the alleged invasion, the source said: “But the criminals being executed in the criminal enclaves are irrelevant. Human skulls in different shrines? Mini Barracks in the bushes by these criminals? Missing innocent souls is (sic) of no concern? The Nigerian Army must fish out criminals in our society.”
Source – Vanguard The Peoples Democratic Party, PDP, presidential candidate, Atiku Abubakar, has said Governor Nyesom Wike of Rivers State is not the custodian of votes in the State.

He and five other PDP governors have been aggrieved with Atiku and the party’s leadership after he lost the presidential primaries.

The governor accused Atiku of backing Iyorchia Ayu to remain as the party’s National Chairman.

Wike and some governors of the party said a particular region can’t produce PDP’s National Chairman and presidential candidate.

The governor also accused Atiku of sidelining him in the constitution of his presidential campaign council.

Speaking through the spokesperson of his campaign council, Dino Melaye, he said it’s wrong for Wike to think he would fail in Rivers State.

He stressed that the governor can’t decide who the people of the State would vote.

“It’s very fallacious for you to think that because that governor is not with your candidate he will lose the State.

“I will cast your mind back to a day when you sat down and wrote result for a State. We are not in that era any longer. With the advent of BVAS and electronic transmission of results, in Rivers State for example, Governor Wike is not the custodian or he is not to appropriate the votes of Rivers.

“If you now go to elections as it’s now with electoral reforms, the grassroots matters; the electorate matter; the youth and women matter. That is why Atiku is speaking directly to the conscience of the electorate,” Melaye told Channels TV.
Source – Daily Post