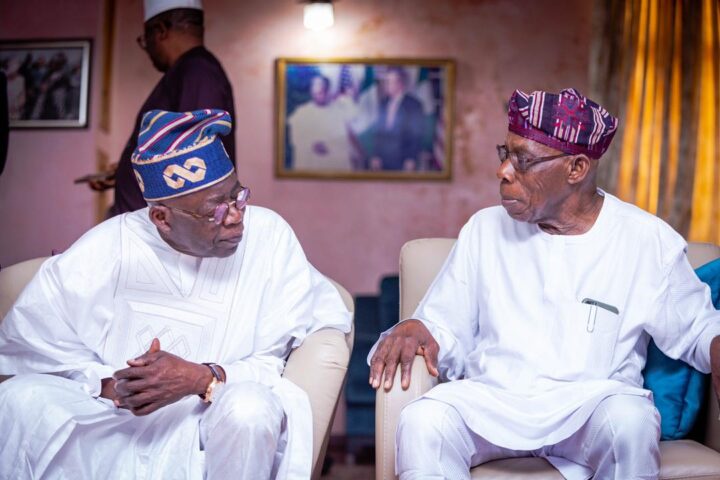 Bola Tinubu, presidential candidate of the All Progressives Congress (APC), has applauded the efforts of former President Olusegun Obasanjo in fostering peace in Ethiopia.

On Wednesday, the Ethiopian government agreed to end the two-year conflict with rebel forces in the country’s northern Tigray region.

The agreement was reached at a meeting in South Africa, after the latest round of peace talks convened by the African Union (AU).

The fighting began after forces loyal to the Tigray People’s Liberation Front, which was the nation’s pre-eminent power broker for decades before being sidelined by Ethiopia’s Prime Minister Abiy Ahmed, reportedly attacked a federal army base.

Millions of people have been displaced by the fighting between both parties, which started in November 2020.

Obasanjo, the AU envoy who led the on-and-off negotiations for more than a year, described the cease-fire agreement as the beginning of peace.

In a statement on his official Twitter handle, Tinubu commended the former president’s efforts in uniting Ethiopia.

“I commend the statesmanship of former President Olusegun Obasanjo as he continues his contribution to the stability of the African continent with a successful diplomatic mission in Ethiopia where he led the mediation of an important peace treaty,” he said.

“It is hoped that the process results, ultimately, in the permanent resolution of the conflict and a full commitment to the cause of unity, restoration, and development.”
Source – The Cable The Presidential Campaign Council (PCC) of the All Progressives Congress (APC) has described the Presidential candidate of the Peoples Democratic Party (PDP), Atiku Abubakar as a traitor.

The Director of Special Media Projects and New Media Tinubu/Shettima PCC, Chief Femi Fani-Kayode stated this in a statement issued Thursday while reacting to the statement credited to spokesperson of the PDP Presidential Campaign Management Committee, Senator Dino Melaye.

Melaye had in a statment described the APC Vice Presidential candidate, Senator Kashim Shettima as a “grand commander of bandits”.

He also alleged that Shettima was aiming at establishing an office for the Boko Haram terrorists at the presidential villa if the APC presidential candidate, Bola Tinubu wins the election in 2023.

He noted that the allegation against Shettima was absurd and designed to terrify the people and make them feel that APC is a party of terrorists and that the party’s candidate, Asiwaju Bola Tinubu is a man that condone terrorism.

Fani-Kayode assured that the ruling APC will defeat Atiku in his ward at the polls.

“I can tell you that Atiku Abubakar is a traitor, who continuously betrayed everybody that has worked with him, including President Obasanjo, late Gen. Yar’Adua, late President Yar’Adua, including APC and the PDP. His record of public office is betrayal.

“At the end of the day, he’ll betray PDP again. You remember, he betrayed the governors of his party. He broke his words and Dino Melaye is saying this is the man that should be President of our country. No way!”

Fani-Kayode, therefore, called on Atiku to stay at home, saying the presidential election will not be decided in Washington, Paris or Dubai but by Nigerians.
Source – Daily Trust The crisis rocking the Delta State chapter of the Peoples Democratic Party, PDP is far from over as a National Leader of the party, Chief James Ibori, the immediate past governor, Dr Emmanuel Uduaghan, the Senator representing Delta South, Senator James Manager and other party’s bigwigs today shunned the inauguration of Delta State PDP Campaign Management Committee.

Other absentee political bigwigs include a former Secretary to the Delta State Government, SSG, Comrade Ovuozourie Macaulay, the party’s candidate for Delta North Senatorial District, Prince Ned Nwoko, members of the House of Representatives, commissioners, special advisers among others.

Addressing party faithfuls, Governor Ifeanyi Okowa urged aggrieved members of the party to embrace peace and support the party candidate for the sake of posterity.

“Yes, there are issues in PDP Delta state and we will settle it and PDP will come out stronger and united.

“I want to appeal to the aspirants to embrace all and do the one you can to support your brother because there is always a tomorrow. In 2006, I ran for governor but didn’t get it but I supported the person and today I’m a governor.

“Our campaign will go through 270 wards that’s where our votes will come from. My politics is based on issue and I don’t insult people in the course of my politicking.

“Those that said I have not done anything in Delta state are locked up in Abuja, he maybe from Delta but locked up himself in Abuja.” He said.

The party’s gubernatorial flag bearer, Sheriff Oborevwori, thanked Okowa for standing and believing in him. He further promised to uphold the legacy of Okowa.
Source – Vanguard