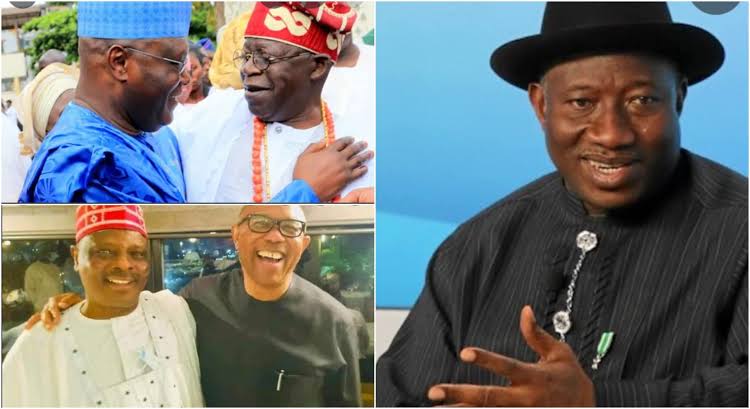 Former President Goodluck Jonathan has called on Bola Tinubu, Atiku Abubakar, and all candidates in the 2023 general elections to strive to make their campaigns issue-based, clean and violence-free.

Jonathan made the call in his virtual goodwill message read on Thursday in Abuja at the signing of the first National Peace Accord on the 2023 general elections which was attended by presidential candidates and their parties.

He also urged candidates, their promoters, and supporters to exercise restraint and to run their campaigns based on issues that affected Nigerians.

“We are at a critical stage in our national life where we have no choice but to promote national cohesion, love and hope in order to make the desired progress.

“We cannot afford to continue to play politics of bitterness and division along ethnic and religious lines. This is because such kind of politics portends great danger to our unity, growth and the sustenance of our democracy.

“We have to be mindful of the destructive impact of hate speech, fake news and mindless propaganda, especially in a clime where the fabric of unity and stability still needs to be strengthened.

“I charge the candidates, their promoters and supporters to exercise restraint and seek to run their campaigns based on issues that affect our people.

“They should, by all means, avoid needless attacks on personalities and use of abusive language for those are the elements that cause chaos and crisis during elections,’’ Jonathan said.

He said that the task of ensuring peaceful elections in 2023 was our collective responsibility.
Source – PM News Dotun Babayemi has been expelled by the Peoples Democratic Party in Osun State.

He was expelled after the Supreme Court judgment that ruled in favour of Ademola Adeleke as the party’s candidate in the gubernatorial primary election.

Babayemi had sought the court’s intervention in appealing against the PDP gubernatorial primary election which produced Adeleke.

This is as the party also praised the judiciary for living up to its expectation as the house of justice.

In a press statement signed by Adekunle Akindele, the Osun PDP caretaker chairman on Thursday in Osogbo, the party disclosed that Babayemi had since ceased to be a member of the PDP.

The party also warned against any accommodation of the expelled politician in PDP matters.

The statement added that “As we are rejoicing, we must note very strongly that a mole among us who was an active agent of the APC had since lost his membership of PDP. No organ or affiliates of the party should accommodate him or his agenda again within this party.

“Any member of the party who continues to romance the expelled member risks being charged with anti-party activities and may face appropriate sanctions. We must get rid of fifth columnists by descending heavily on them. We must uproot them and cut down their branches”, the party Chairman stated.
Source – Koko TV