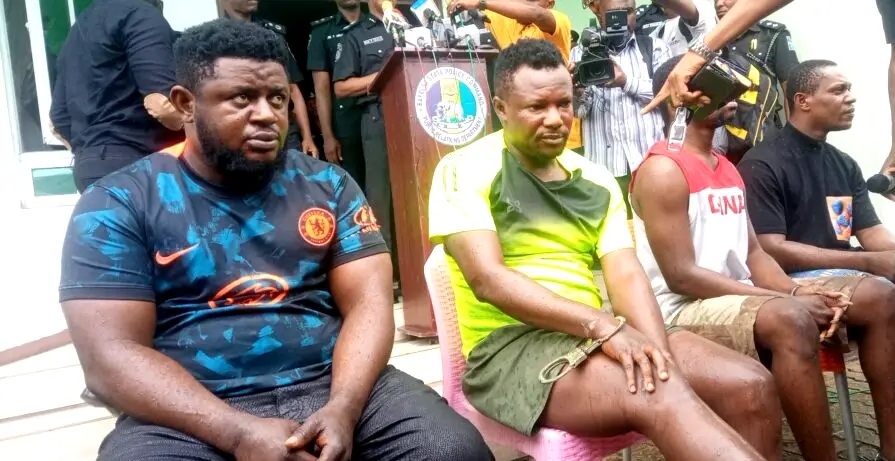 John Ewa, a kidnap kingpin arrested in Abuja and responsible for high-profile kidnappings in Bayelsa State is currently been paraded alongside three members of his gang by the police at the Police Officers Mess, Yenagoa Bayelsa State.

Recall that the kidnap suspect was arrested by operatives of Operation Puff Adder in Abuja, after which his real identity was revealed.

As against the trick of the name Lyon John that trended on social media, the suspect’s real name was discovered to be John Ewa.

Vanguard gathered that John Ewa changed his name to John Lyon when he was a dispatch rider at a commercial bank after he was sacked due alleged involvement in criminal activities at the bank.

Ewa, it was learnt, while working at the bank, had run several errands for his superior which gave him access to privileged information which was supplied to criminal elements to carry out operations.

After his appointment was terminated, Ewa was said to have recruited boys to run a kidnap syndicate with specialisation in kidnapping high profile residents of the state.

According to investigations, operatives of Puff Adder got on the trail of Ewa after the arrest of two suspects, Kingsley Innocent and Godlives Donald involved in the kidnap of Mr Danjuma Emeije a manager with Premium Trust Bank Yenagoa. The headquarters of the Ministry of Defence, Abuja on Monday morning was blocked by some retired military officers.

The aggrieved retired military officers expressed their grievances over the non-payment of their Security Debarment Allowance, among others.

The protesters who were joined by some relatives of retired officers who are dead blocked the access road to the Ministry located at Ship House on Olusegun Obasanjo Way in Abuja.

The Minister of Defence, Bashir Magashi was accused by the military veterans under the aegis of the Retired Members of Nigerian Armed Forces (RMNAF) and the Coalition of Concerned Veterans (CCV) of being insensitive to their plight.

The spokesman of the CCV, Abiodun Durowaiye-Herberts while speaking on behalf of the protesters noted that they would not leave the ministry’s entrance until their demands are met.

Durowaiye-Herberts further stated that the retired military officers have made arrangements to sleep overnight if the situation warrants.

He said, “We are here alongside our wives and children, and the widows of late military personnel and veterans who died in service, some of whom died fighting Boko Haram terrorists. We’ll be sleeping over at this place until the Minister of Defence, Magashi accede to our demands.”

The National Secretary of RMNAF, Roy Okhidievbie, while speaking on the reason for the protest said the demonstration was to demand the payment of their security debarment allowance owed them by the Federal Government.

According to Okhidievbie, the Minister of Defence has refused to disburse the allowances despite approval by President Muhammadu Buhari.

Okhidievbie said, “We have had meetings with the Defence Minister, Magashi, but he appears to be headstrong, heartless, and unperturbed concerning the grievances of retired military officers, as he never paid nor showed any interest or concern to pay these allowances, especially the Security Debarment Allowance.”
Source – Naija News