Adeboye To Christians: Be United To Defeat Enemies Of Nigeria | Don’t Make The Mistake Of Voting Killers – Jonathan Charges Nigerians 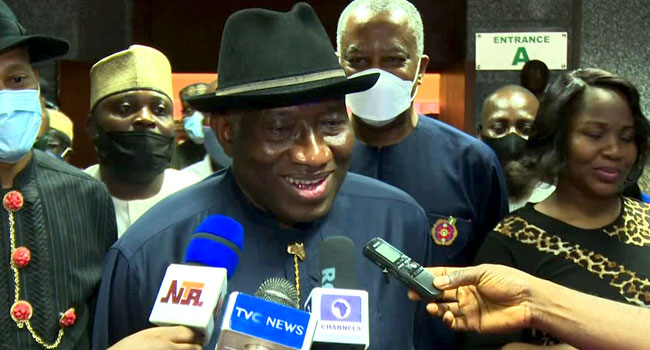 Ahead of the 2023 general elections, ex-President Goodluck Jonathan has charged Nigerians not to make the mistake of voting those he described as killers into elective positions.

He gave the charge on Sunday in Uyo during a special interdenominational service to celebrate the 35th anniversary of the creation of Akwa Ibom State.

“In 2023, you must not make the mistake to vote killers,” Jonathan said. Those who will carry knives, guns, and all kinds of gadgets to go and kill people because of politics, are the enemies of society. If you kill to become a leader, you will continue to kill to remain a leader.”

“The people will continue to suffer. Make sure that from the House of Assembly to the House of Representatives to Senate to governor, you vote the right people in Akwa Ibom State.”
Source – Channels

Adeboye to Christians in Nigeria: Be united to defeat enemies of the nation Pastor Enoch Adeboye, the General Overseer of the Redeemed Christian Church of God (RCCG), has urged Christian to be united irrespective of their denominations.

Adeboye gave the advice at the Chapel of Mercy, Dadin-Kowa, Jos, on Sunday.

He said he was in Jos to commiserate with the family of the Late Rev. Isaac Oyebamiji, the Founder and Senior Pastor of Chapel of Mercy, as well as members of the church.

“So, it has not been easy with me trying to accept the fact that he is no more, but I’m here today to condole and pray for his family and indeed all members of this congregation.

”The servant of God has finished his assignment on earth and has gone to be with his maker; ours is to live right so that we will meet him on the resurrection day.

“But I want to use this opportunity to call on Christians in Nigeria to be united in order to defeat the enemies of the nation,” he said.

Adeboye advised family members of the deceased to emulate the good ways of their father and sustain the legacies he left behind.

Responding, Pastor Olutoyin Oyebamiji, wife of the deceased thanked Adeboye for the visit and described it as encouraging.

The News Agency of Nigeria reports that Adeboye was accompanied for the visit by his wife, Foluke.

NAN reports that Oyebamiji, 64, died in February after a brief illness in the United States.
Source – Vanguard