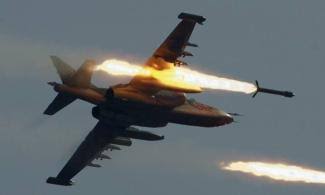 There is palpable fear in Rumuekpe Community, Emohua Local Government Area of Rivers State following the invasion of the area by the Nigeria Air Force and Army operatives. Saturday Vanguard gathered that a combination of the military men come into Nvakohia Village in Rumuekpe on air and on land shooting sporadically.

It was also gathered that many residents who were scampering for safety sustained various degrees of injuries and that some person’s whereabouts are yet unknown.

Saturday Vanguard further learned that the operation may not be unconnected with the move to end oil theft in communities of the state.

A source within the community, who did not want his name in print said: “As of the hour of 6 pm, Thursday, there was a reckless shooting around Rumuekpe community by the Nigeria Airforce, why the Nigeria Army was on the land with a drone capturing round the village making the habitats be terrified.

“The reason for the shooting has not been made known to the people of Rumuekpe even as the Nigerian army has invaded the community for weeks now without any crisis happening in the Rumuekpe community.

“We are yet to know why the Armed Forces have chosen to unleash an excruciating attack on the people of Rumuekpe when there is no communal crisis or neighbourhood war.

The source called on the Federal Government, the state government led by Governor Nyesome Wike and well-meaning individuals to come to the aid of the community.

It further called on the military to immediately explain to the community why such atrocious and unlawful shootings would be targeted at them.

When contacted at press time, the spokesman of the 6 Division of the Nigeria Army, Port Harcourt, Major Iweha Ikedichi, promised to confirm the report and speak to Vanguard reporter later.
Source – Vanguard