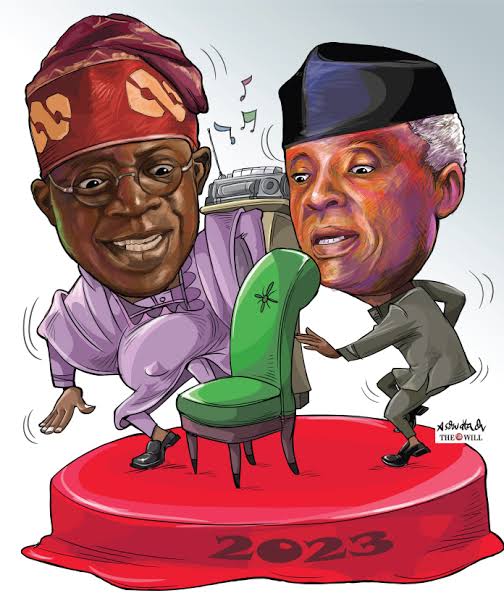 Following weeks of anxiety and serial postponements, the presidential campaign council list of the flagbearer of the ruling All Progressives Congress, Asiwaju Bola Tinubu, was released with several notable names of party chieftains missing. The 422-man list has names of political heavyweights including APC governors, ministers, lawmakers, ambassadors as well as serving and past public office holders.

However, there are shocking omission of party stalwarts, many of whom have been at loggerheads or engaged in cold war with Tinubu over his preference for the contentious Muslim-Muslim ticket.

They include Vice President Yemi Osinbajo, former Speaker of the House of Representatives, Yakubu Dogara; former Secretary to the Government of the Federation, Babachir Lawal; former Minister of State for Education, Chukwuemeka Nwajiuba and one of Tinubu’s sweat merchant, Adebayo Shittu, who heads one of his biggest support groups — Asiwaju Tinubu-Shettima Coalition for Good Governance.

While the camp of Osinbajo had distanced itself from the former Lagos governor after his emergence as winner of the APC presidential ticket, the duo of Dogara and Lawal had remained a perennial thorn in Tinubu’s flesh for selecting ex-Borno Governor Senator Kashim Shettima, a fellow Muslim, as running mate.

Dogara had predicted on Tuesday that the adoption of a Muslim-Muslim ticket was a fruitless political effort that was “doomed to end in spectacular failure.”

The ex-speaker made the statement while delivering his keynote address at a summit tagged ‘Meet The Church,’ organised by the Nigeria National Christian Coalition.

Lawal, on the other hand, vowed that the introduction of a same-faith ticket by the APC was a deliberate plan to further create divisions in the north.

The disgruntled former SGF, who spoke during an interview on Arise Television, declared that he was working with about 40 Christian leaders in the north to ensure that the contentious APC ticket failed.

However, The PUNCH gathered that loyalists of the APC national leader have always seen the former Minister of Communications as an outsider because he “found his way into the party” through Congress for Progressive Change, one of the few political platforms that merged to form the current All Progressives Congress.

Shittu had told our correspondent in a recent interview that, “Why I think people often regard me as an outsider was probably because I was never a member of Alliance for Democracy, Action Congress or Action Congress of Nigeria. Besides, it has not been on record that I have a fight with Tinubu, even though critics who are jealous of my current achievements in the struggle to ensure success for him, out of pettiness and rivalry, have been trying to paint me black and blackmail me with the same slogan of ‘I am one of Tinubu’s enemies.’

“But I am happy and proud to say that Tinubu, as an experienced politician who knows his onions, has always maintained that Shittu is not an enemy. The fact that we never worked together in the past does not translate to being an enemy. In any case, he is also somebody who appreciates what I have been doing.”

The inclusion of former Rivers State Governor, Rotimi Amaechi, and Minister of Interior, Ogbeni Rauf Aregbesola, who have been indicted of alleged anti-party activities in the last month has come as a surprise.

While Amaechi had subtly accused Tinubu of financially inducing delegates for votes at the last Convention, Aregbesola was believed to have worked for the victory of the governor-elect of Osun State , Ademola Adeleke, at the expense of the incumbent and fellow party member, Adegboyega Oyetola.

Faleke’s statement on Friday read, “We are pleased to announce the nominees of the leadership of the APC Presidential Campaign Council, as per enclosed. All nominees are kindly advised to pick their appointment letters from the undersigned on Monday, 26th September, 2022 at 12noon.

“The venue is Tinubu-Shettima Presidential Campaign Council on Plot 781, Herbert Macaulay Way, Central Area Abuja. All other members will be contacted by the leaders of their respective directorates.”
Source – Punch