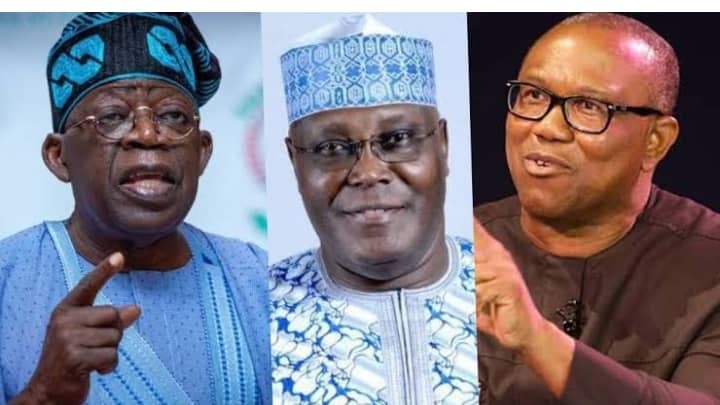 The presidential candidate of the ruling All Progressives Congress (APC) Asiwaju Bola Ahmed Tinubu will win the 2023 presidential election, the Economist Intelligence Unit (EIU) has stated in a new country report.

It stated the chances of the People’s Democratic Party (PDP) candidate Atiku Abubakar have been significantly reduced by the internal crisis in the party.

His chances, the report further predicted, have been narrowed by the growing popularity of Peter Obi, the candidate of Labour Party (LP), in the South-East, which is traditionally the powerhouse of the PDP.

Most of his opponents stepped down for him moments before the commencement of the primary election while other aspirants including Vice-President Yemi Osinbajo went ahead to test their popularity with Tinubu but lost.

His choice of Kashim Shettima, a former Borno Governor and a fellow Muslim, as his running mate has continued to generate controversy in the APC and across the country ahead of next year’s election.

But the EIU said it does not appear that the same-faith ticket would affect the chances of Tinubu in the presidential election.

“We expect Tinubu to take the presidency, and recent developments have only reinforced our thinking. It does not appear that a Muslim-Muslim ticket will weigh significantly on Tinubu’s electoral chances,” it said.

Like the APC, PDP has been plagued by internal crisis since the presidential primary was concluded.

Rivers Governor Nyesom Wike expressed dissatisfaction with the manner the primary was conducted.

The issue was aggravated when Wike, who was Atiku’s closest opponent in the primary, was snubbed by Atiku as the former vice-president picked Governor Ifeanyi Okowa as his running mate.

The decision was contrary to the recommendation of Wike as running mate by the special PDP selection committee.

Wike has stated his demands for reconciliation, among which is the removal of the national chairman of the party, Iyorchia Ayu.

But Ayu has vowed not to resign his position, insisting that his mandate was for four years.

“Atiku has more cause to worry. Not only is Obi eating into the PDP’s South-eastern support base, but Governor Wike, who finished second in the primary, does not appear to be interested in endorsing him,” the EIU said.

The crisis rocking the PDP took a turn for the worse on Wednesday as Wike’s camp pulled out of the campaign council of Atiku.

The report said with the amendment of the Electoral Act to accommodate electronic transmission of result, the role of the establishment in influencing outcome of the presidential election would diminish significantly, leading to the most fairest and credible polls since the return to democratic rule in 1999.

The report added that despite the presence of three major political gladiators from the three major ethnic groups in the country in the presidential race, the amendment of the Electoral Act would bring less disputes about the presidential election result.
Source – The Nation Ahead of the 2023 General Election, the General Abdulsalami Abubakar (Rtd)-led National Peace Committee (NPC) has announced the appointment of five notable individuals as new members of the committee.

Naija News reports that the peace committee was founded in 2014 “in response to emerging threats occasioned by the 2015 general election”.

The NPC monitors compliance with the peace pact signed by candidates of political parties as part of efforts to support free, fair, and credible elections.

Speaking at a meeting of the NPC on Thursday, the chairman of the Independent National Electoral Committee (INEC), Mahmood Yakubu, charged members of the committee to engage with stakeholders in the political space early enough, in order to minimise incidents of electoral violence.

“One of the things that the national peace committee can help us do in terms of mitigating security challenges is early engagement with some of the actors.

“Not just signing the peace accord on the eve of elections, but imagine that some of those who perpetrate violence on election day are not necessarily candidates in the election, but are people engaged by beneficiaries of the election.

“So, if we can engage with the actors early enough, I hope that we will be able to turn a new leaf in that respect.”
Source – Naija News The bishops who met presidential candidate of the ruling All Progressives Congress (APC), Asiwaju Bola Tinubu, in Abuja on Thursday have said they were not committed to endorsing him.

Daily Trust had reported how the candidate met with Pentecostal Bishops Forum of Northern Nigeria.

In his brief comment at the meeting, Chairman of Pentecostal Bishops Forum of Northern Nigeria, Archbishop John Praise, said, “We are not committed to endorsing anybody, but you should ask your conscience and from what you have heard and from the explanation, he (Tinubu) had given to us to make your own judgement of who will better rule and handle the country.”

Tinubu explained that his choice of Shettima was based on competence and not religious considerations, adding that only competence can resolve the political and socio-economic challenges bedevilling the nation.

The APC presidential candidate said he has always been a friend of the Christian community and he should be considered based on his track records, plans and agenda for developing Nigeria.

“How will Nigeria develop? How do we banish hunger? How do we improve the insecurity and how do we eliminate killing one another, shedding of blood of innocent citizens, that is what we must take to the office and not our religion.

“My intention is clear, not religiosity. My intention is to develop this country, to bring prosperity to our country and I have better qualification, better track records, better exposure, better vision than any of my mates.

“When the shortlisted names came, I looked at the characters on the list, their background and everything and here is somebody (Kassim Shetimma) who is so brilliant, so committed, who, during the crisis in Borno protected Christians,” he said.
Source – Daily Trust