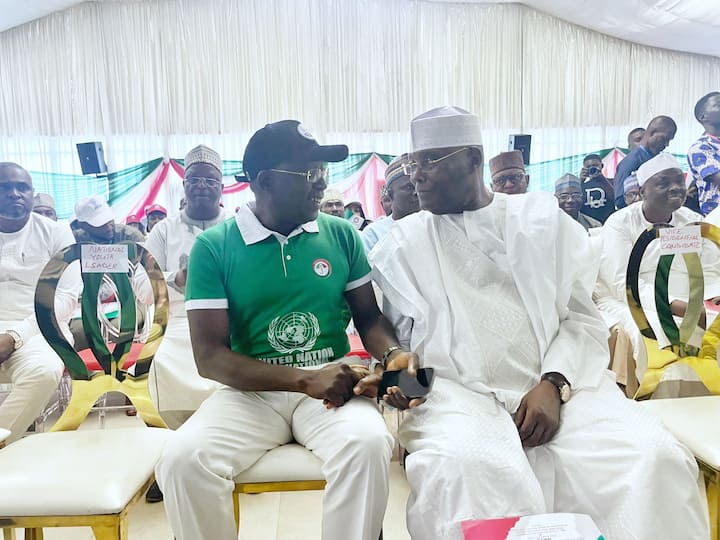 The Wike camp announced their plan not to participate in the campaign council which was scheduled for inauguration next Wednesday after a meeting at Wike’s private residence in Port Harcourt, Rivers State, on Wednesday morning.

They hinged their decision on the failure of the party’s Chairman, Iyorchia Ayu to resign from office, insisting that the position must come to the South for balance, justice, and equity.

Sequel to the development, the main opposition party went into a marathon meeting to deliberate on the impact of the withdrawal on the party’s plans.

The party spokesman, Debo Ologunagba confirmed to The PUNCH on Wednesday that the party had been meeting since Wike’s camp announced their withdrawal from the campaign council, adding that the National Working Committee would announce their decision today (Thursday).

“As a party, we need to take a firm position to rebuild and rebrand our party. We have been in a marathon meeting since morning (Wednesday). But one thing is clear, no one has rejected our presidential candidate; that is very important. The meeting will continue tomorrow (today) and after the meeting, we will make our position clear,’’ he stated.

But the Wike camp insisted that only the removal of Ayu would make them rescind their decision.

The PUNCH reports that Wike, who lost the presidential ticket to former Vice-President Atiku Abubakar in the May primaries, has so far refused to be swayed by entreaties to work with Ayu.

Reacting to the withdrawal from his campaign council on Wednesday, Atiku in a statement he personally signed reiterated his decision not to interfere in the demands for Ayu’s removal.

The statement titled, ‘Let us join hands and move on with the task of nation building,’ read in part, “Early this morning (Wednesday), my attention was drawn to a news clip in which several very senior and influential members of our great party, the Peoples Democratic Party, addressed the press and, amongst other things, declared that they are withdrawing forthwith from the Presidential Campaign Council set up by our party to judiciously plan and prosecute the general elections set to hold in February and March 2023, on the one hand; and reiterated their earlier calls for the resignation or removal from office of the national chairman of our party, Dr. Iyorchia Ayu, on the other hand.

“The people that addressed the press must have their reasons for withdrawing from the Presidential Campaign Council, and I will not speculate as to what those reasons may be.

“Personally, I am quite surprised with this withdrawal because, as I have been informed by officials of our party, apart from the Rivers State chapter of the PDP, all the remaining states of the federation submitted names of people who they wanted included in the Presidential Campaign Council.

“On the calls for the resignation or removal from office of our national chairman, however, I must reiterate what I have said severally in public and in private:  the decision for Dr. Iyorchia Ayu to resign from office is personal to Dr. Ayu and, neither I nor anyone else can make that decision for him.’’

The presidential candidate further said that as a committed democrat and firm believer in the rule of law and democratic tenets, and the party being one set up, organised and regulated by law and constitution, it is his belief that everything must be done in accordance with, and in conformity to the law and the PDP constitution.

He noted, “If Dr. Ayu is to be removed from office, it must be done in accordance with the laws that set out the basis for such removal. In any event, you will all recall that the very body that is empowered by law to initiate his removal from office has already passed a vote of confidence in him.’’

He, therefore, appealed to the party members to join his drive to lead the country and rebuild the nation.

Atiku also urged the party members that announced their withdrawal from his campaign council to have a rethink.

However, a member of the party’s National Executive Committee, Chief Olisa Metuh, said Atiku would go on with the campaigns even as he berated a member of Wike’s camp, Chief Bode George, for his “hatred for Atiku.”

“Atiku will go on with the campaigns because not doing so would be a victory for those who don’t want him to succeed. Truth is, Atiku has no power to remove Ayu.’’

Dismissing the Wike’s camp’s demands, a member of the PDP National Working Committee, Timothy Osadolor, carpeted the Rivers governor for allegedly holding on to his grudges for too long, warning that his ego might be his undoing.

Osadolor said the call for Ayu’s sacking was a plot to sabotage the party’s chances in the 2023 elections.

He stated, “The situation is being taken too far; Wike is crying too much for a matured person. I don’t know why Wike with all the experiences he had achieved in life cannot get over the loss of the primary. Ego is good but ego to some candidates can lead to destruction.’’

The NWC member further stated, “Why did you want to bring down the house because of your interest? Calling for the sacking of Iyorchia Ayu and supporters at his whims is not possible which he knows is not possible at this time which is not even what he wants.

“I believe calling for the sacking of Iyorchia Ayu is to sabotage the general elections and I believe he is already manifesting in his actions.” However, the former Deputy National Chairman of the PDP, Chief Bode George, stressed that the demands for Ayu’s resignation were not a constitutional but a moral issue that requires little reasoning to unify the party.

George stated this when he appeared on Channels TV programme, ‘Politics Today,’ on Wednesday night.

Justifying the demand, he said, “We are not talking about removing him or forcing him to resign. What we are saying is Senator Ayu by himself stated that peradventure the presidential candidate emerges from the north, he would resign. So why is he sticking to the point of our constitution?

“What we are talking about is purely a moral issue. Once we use the same moral issue to allow Atiku Abubakar to compete at the primaries; President Buhari is from the North, should another Northerner replace him? Doesn’t that affect inclusivity?

“If he is talking purely on a legal issue, no, that is not what we are saying; if we use the same moral compass to allow him to compete if we zoned the position, would he have emerged? It is not a fixated thing that can’t be fixed.

“We are not talking on a constitutional issue of Ayu resigning or not, what we are saying is that on a moral basis, resign as national chairman.”

But reacting to the development in the party, Ayu, who spoke through his Special Assistant (Media), Simon Imobo-Tswam implored Wike and his allies to return to the campaign council in the interest of peace.

‘’Ayu spoke when he campaigned for this office. He said if a candidate emerges from the North, and the party says he should resign, he will resign. Right now, has the party spoken? Yes. What did the party say? The party gave him a resounding vote of confidence.

“Our appeal is that the party has spoken and it was a vote for unity, a vote for togetherness and purpose. Let us give peace a chance so that we can fight the battle in front of us to displace APC from office.

“As the chairman has said, the confidence vote was not a personal victory. It was a victory of all. It is a win-win for the party. He has appealed that let party faithful focus on the big picture of 2023. It is an appeal that we come back on one page. If we lose this election, Nigerians will not be happy with PDP. Since the PDP left office, the country has been going downhill.’’

Calling for diplomacy to resolve the lingering crisis, Imobo-Tswam said, “We are still appealing. There is a phrase that says ‘What God cannot do, does not exist’ and we are saying ‘what diplomacy cannot achieve does not exist.’ That is what we are saying. Let them come back, so that we can win the election. In an election year, you need everybody. That is our message.” Meanwhile, a top chieftain of the PDP, who was also present at the Wednesday meeting in Port Harcourt, alleged that the party’s presidential candidate failed to honour the promise he made to Wike and other aggrieved governors during their meeting in London recently.

Asked if he knew the decision taken by the aggrieved southern bloc of the PDP could mar the party’s chances in the 2023 presidential poll, the chieftain said, “Does the candidate himself show the willingness to win? Can you unify Nigeria without unifying the platform you want to use to unify Nigeria? Can you go to war with a divided house? The onus is on him. When they met in London, what did they agree on? And when he came back to the people, he decided to say he has constraints. Was it appropriate for his response to be heard through the media? Was it through the media that they conveyed their proposal to him?

He added, “I agree with him that, yes, he thinks it is time for Ayu to go. He wanted to find out the means and methods of implementing it immediately so that they can move ahead, but regrettably, he did not. As usual, he was with some party leaders in London, and then when he consulted the presidential council, he didn’t invite them to discuss the composition. This showed a total lack of respect for the group. So, the group said, okay, Ayu has lost the right to be an umpire. Therefore, it has nothing to do with making Wike the vice president or not making him vice president, even though he (Atiku) was the one who promised with his mouth to make him.”

The chieftain noted the southern bloc group would remain in the party to campaign for their governorship and National Assembly candidates.

On his part, the media adviser to the former vice president, Paul Ibe said, “When your principal speaks, it is final but I will like to state here that there was no reason for them to do a volte-face.

Their decision is not in the national interest.”
Source – Punch