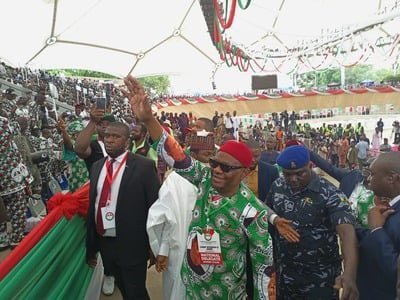 BREAKING: Tambuwal Steps Down For Atiku At Venue Of PDP Presidential Primary Election In a press release signed by Kwankwaso’s aide on Media and Publicity, Ibrahim Adamu, the ex-Kano helmsman described the reports as “spurious allegation” and advised that they should be “completely disregarded.”

The statement read in part: “The attention of distinguished Senator Rabiu Musa Kwankwaso, the national leader and presidential aspirant of the New Nigerian People Party (NNPP) has been drawn to a malicious publication; deliberately concocted by an online tabloid with sole intention of defaming the good character, personality and reputation of the Distinguished Senator.

“The malevolent information, which is totally false, is to the effect that the Distinguished Senator and national leader of the New Nigeria Peoples Party has received the sum of 15,000 USD from Rivers State Governor Mr. Nyesom Wike for PDP Kano delegates and has housed same in an unnamed hotel.

“It is on record that on the 29th of March 2022, His Excellency Senator Rabiu Musa Kwankwaso resigned his membership of the People’s Democratic Party and addressed a national press conference to that effect.

“It is therefore ridiculous that a presidential aspirant will entice an opposition party leader with money to woe delegates from his own party.

“We deny this spurious allegation in its entirety and urge the general public to discard it as a figment of the imagination of the online tabloid.”

Kwankwaso, consequently, gave the tabloid 48 hours to retract the false news item and issue an apology in three national dailies.

“We intend to set a good example to perpetrators of such maligning media reports as our team of lawyers have been briefed and will launch a defamation suit against the lurid tabloid,” he added.

On the above premise, the press release urged the general public to disregard the online reports; insisting they are totally false and misleading.

“Finally, the distinguished senator urges his teeming supporters and followers to remain focused and resolute; as such false and mischievous reports might from time to time be sponsored to blemish the soaring popularity of Senator Kwankwaso,” it stated.
Source – Vanguard Delegates of the Peoples Democratic Party from Rivers State have shunned greetings from a former vice president and presidential aspirant under the PDP, Atiku Abubakar.

The PUNCH reports that Atiku, who left the venue of the PDP’s special national convention, returned to the venue around 5:40pm in company with former senator representing the Kogi West Senatorial District, Dino Melaye.

While acknowledging cheers from some delegates at the venue, delegates from Rivers State ignored the presidential hopeful.

Our correspondent also observed that, despite the greetings from Atiku, the delegates refused to respond.
Source – Punch There were apprehensions in the People’s Democratic Party (PDP) national convention venue on Saturday as the Economic and Financial Crimes Commission (EFCC) stormed the venue.

The atmosphere was charged when the antigraft agency stormed the venue around 4:30 pm.

The coming of the EFCC to the PDP venue may not be unconnected to the story of alleged dollars’ rain on the delegates.

Although there was no arrest made, the EFCC men didn’t speak nor harass delegates or the aspirants but joined the crowd to monitor the event.

The EFCC men, who were about 10, position themselves in strategic positions, after moving around the Velodrome, the national stadium of the event.
Source – independent POLITICS NIGERIA reports that Atiku had stepped out with his entourage a few minutes after he arrived at the Velodrome of the Moshood Abiola Stadium, Abuja.

“He had some matters to go and attend to. He will soon be here. It is not anything to worry about,” Fintiri told the press.

Also, Fintiri said Mohammed Hayatu-Deen who stepped down for Atiku on Friday, instructed his delegates to vote for the former vice president.

The 75-year-old has been vying for the presidency since 1992.

Delegates from different states are seated and ready to cast their votes for their preferred candidate. The process is expected to commence soon.
Source – Politics Nigeria