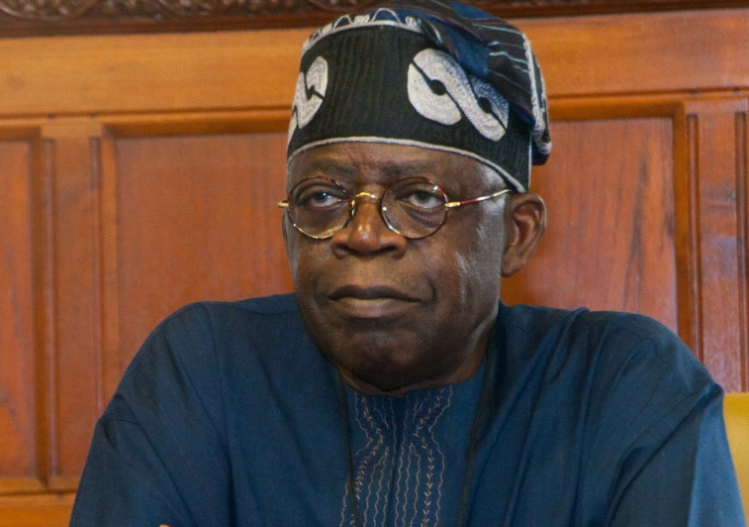 All Progressives Congress National Leader, Bola Tinubu, on Tuesday, sympathized with the families of the victims of an Abuja-Kaduna train attack.

Terrorists had attacked the Abuja-Kaduna train on Monday night with hundreds of passengers on board.

The former Lagos State governor from 1999 t0 2007 said the attack by marauders on harmless passengers was a “national tragedy” and over 60 persons lost their lives to the terror.

He made this known at Eko Hotels in Lagos, the venue of the 13th Bola Ahmed Tinubu Colloquium with the theme, ‘Pivoting Nigeria Into The New Order’.

The APC presidential aspirant also cancelled his 13th Birthday Colloquium to honour the victims of the train attack.

He said, “Today is supposed to be a very joyful 70th birthday of mine living on earth. I give thanks to God Almighty for being able to survive to this age…

“I have just been informed of a very sad incident in our country, very sad indeed, that over 60 people and many more were killed and bombed on a train between Kaduna and Abuja just last night. That is a very serious incident about the security of lives in this country and it calls for a very serious sober reflection.

“For me to be here celebrating, dancing and enjoying myself doesn’t show enough concern of a statesman and a senior citizen of this country.

“This event should not be holding. I have consulted with the people you see around me here and they’ve agreed with me and being a very highly committed democrat, I have given myself to their suggestion that they agreed that this event be cancelled.”

The APC leader, alongside hundreds of others at the event, thereafter observed one-minute silence for the lives lost in the spirit of “national tragedy and concern”.

Tinubu urged the clergies at the event to pray for the repose of the soul of the departed and for comfort for their bereaved family members.

For years, Kaduna has become a killing field for bandits and terrorists who operate with ferocious fury while security agents allegedly looked away.

The killings have become more worrisome because the military has a heavy presence in Kaduna with no fewer than six military formations in the city. The military formations include Jaji Military Cantonment; 1 Mech. Division Headquarters, Nigerian Army, Kaduna; New Barracks, otherwise known as ‘Kotoko’ Barracks; Old Site of the Nigerian Defence Academy, Kaduna; Kalanpazi Barracks (Artillery Regiment) and the Nigerian Air Force Base.

The Kaduna State government had detailed a territory under siege in its novel annual security report 2020 when it said 937 persons died that year while 1,972 others were kidnapped. It also said 3,348 residents were kidnapped in 2021, and 1,192 deaths recorded, which is 27.21 per cent higher than the number killed in 2020.
Source – Punch

Mass Defection From APC Begins In Kwara, Osun, Others After Controversial National Convention

The All Progressives Congress has started witnessing massive defection of its members to the opposition party after it just concluded its national convention.

This comes on the trail of a heated crisis in the party, despite a charge by President Muhammadu Buhari, for unity.

Punch reports that the reconciliation committee headed by Senator Abdullahi Adamu, who is now the chairman of the party, had yet to submit its full report as only an interim report had been handed over to the APC.

Meanwhile, it had been reported that there were about 208 ongoing court cases in different parts of the country by aggrieved APC members. However, with many of the cases being concluded, some losers have now begun dumping the party, while others are in talks with the opposition party, the Peoples Democratic Party.

According to the report, members of the APC faction in Kwara State led by the Minister of Information and Culture, Lai Mohammed, had removed the party’s flag from their secretariat and members had deserted the building.

A member of the state House of Assembly representing the Ojomu/Balogun Constituency in the Offa Local Government Area, Saheed Popoola, who is a leading member of the Lai Mohammed faction, announced his defection to the Social Democratic Party on the floor of the Assembly last week.

In a chat with the newspaper on Monday, the faction said it had exited the APC.

The Publicity Secretary of the APC faction elected at the parallel congress organised by the group, Ibrahim Sharafadeen, disclosed this in an interview with Punch.

“We have exited the APC officially, but we have not declared for any political party. Our leaders have not made any public declaration on which political party we are moving to. We will make it public very soon,” Sharafadeen stated.

Asked if the faction would move to the SDP, Sharafadeen said no, adding, “That was the sole decision of Popoola, who informed the Kwara State House of Assembly that he had defected from the APC.”

In Sokoto State where there is no APC chairman currently, it was learnt that the PDP had begun making moves to bring aggrieved members into its fold.

An APC chieftain in the state said, “Sokoto State is a peculiar matter. The party has no recognised leadership at the moment, because of the court case challenging the congresses. In fact, only statutory delegates from Sokoto, like former governors and others, were allowed to vote (during the national convention). Others, who emerged from the congresses, were barred.

“We are aware that the PDP is already trying to woo some of the APC members into its fold. And if this disagreement isn’t well managed, the APC may lose in Sokoto again.”

In Zamfara State, the faction led by Governor Bello Matawalle is the recognised one, but the factions led by Senator Kabiru Marafa and ex-governor Abul’Aziz Yari have refused to withdraw their cases from court.

The Mafara faction said it would not withdraw its pending cases before the courts despite the national convention conducted last Saturday.

The spokesman for the faction, Bello Bakyasuwa, said the pending cases in various courts would be pursued to a logical conclusion.

He said, “We are going ahead with the court cases. We have pending cases at various courts and we will not withdraw the cases, because we are still not convinced that we have been treated fairly.

“We are challenging the legality of Governor Matawalle’s factional chairman, Tukur Danfulani, and the remaining executive committee members because they were not elected in a legal way.

“We are also challenging the reason why the national headquarters of our great party refused to recognise our factional party executives, who were duly elected during the parallel congress held in the state.”

Bakyasuwa also stressed that the faction would challenge last Saturday’s national convention as due process was not followed during the event.

“We are going to court to challenge the election of Senator Abdullahi Adamu and other national executive members of the party, because of a series of illegalities. We were really not happy with the conduct of the congress and we will not let it go like that,” he stated.

On whether the Marafa’s APC faction would remain in APC or not, Bakyasuwa said it was in consultation with lawyers.

“We are in consultation with our lawyers on whether to remain in the party or not. So, I cannot precisely tell you what will happen until after the consultation,” he explained.

In Osun State, Abiodun Agboola, Publicity Secretary of the APC faction backed by the Minister of Interior, Rauf Aregbesola, said members of the group would wait for the court to decide a matter it instituted challenging Governor Gboyega Oyetola’s eligibility, which is before an Abuja court.

He, however, said the group had no plans to defect from the APC adding that it would pursue the matter of Oyetola’s eligibility to stand as the governorship candidate of the APC to a logical conclusion.

He stated, “We are not moving to any party and we are not talking to any party whatsoever. We remain members of the APC. The national convention has come and gone. Officers have emerged and they have been sworn in.

“That does not mean that we are going to leave the party. But we have a case in court. We are challenging his (Oyetola’s) eligibility. The case came up before a Federal High Court in Abuja last Friday. We are saying that he is not even qualified to stand as the flag bearer of the party in the election coming up in July. We will wait for the court to decide that case before the next line of action.”
Source – Sahara Reporters