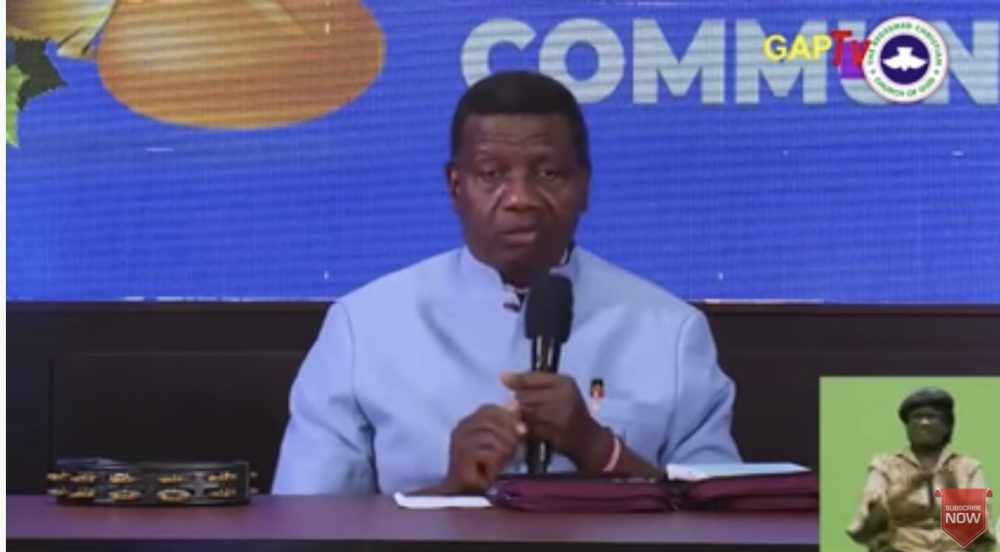 General Overseer, Redeemed Christian Church of God, RCCG, Pastor Enoch Adeboye has recruited 1,000 prayer warriors to join him in praying for Nigeria and the world to overcome COVID-19.

Adeboye said the people of the world had failed to realise that they have sinned against God and needed to repent of their sins to halt the virus.

He spoke during the Crossover Service of the church early Saturday morning in Ogun State.

Adeboye said the world is making one vaccine and that another variants defying the vaccines were emerging, requiring a booster jab.

“Convulsion is still on in the world and the world has failed to apologise to God. What got me more concern is that Omicron is not a baby of COVID-19, it is the grandchild of COVID-19. That is why it is moving faster but softer,” he said.

He said there was no way he could tell the senate and the house of representatives members to repent because they would call him bluff as he is not their leaders.

To get out of this problem, Adeboye said a friend of his suggested that he should pray and apologise to God on behalf of Nigeria and the world.

“I need 1,000 volunteers, strong Christians, young and prayer warriors to join me in seeking the face of God for Nigeria and for the world.

Adeboye said the volunteers would join him in 72-hour of fasting and praying continuously, saying that the first 24 hours would be devoted to praying for Nigeria, 24 hours for the world while the remaining 24 hours would be made known to them what it would be used for.

He stated that the 1,000 volunteers would be selected on first come first serve basis, saying that the praying and fasting would kick off in February 2022.

Adeboye said the situation of COVID-19 had reached a stage that any country that would detect any other variant would conceal it to avoid what happened to South Africa when its government opened up on the Omicron variant.

“In the future, those who would detect another variant will not talk. We need to do something urgently so that there will not be another variant,” he said.
Source – PM News Posters of Mallam Saliu Mustapha, who is contesting for the post of National Chairman of the ruling All Progressives Congress (APC), have surfaced in some parts of Lagos.

Barring any last-minute development, the APC is slated to hold its national convention in February for the election of new members of the National Working Committee (NWC).

Mustapha is a former Deputy National Chairman of the defunct Congress for Progressive Change (CPC).

Mustapha, who is from Kwara State, is known to be one of Buhari’s strong allies since the days of CPC.

The posters were seen by our correspondent around Ikeja, Oshodi, Maryland areas of Lagos.

‘Why I want to be the next APC Chairman’

Mustapha said his objective is to lead the party to a new era of sustained victories, progressive policies, dignified politics and national development.

Declaring his intention to run for the office of the APC National Chairman, he said the party needed to consolidate its message and find the best way to build on the success stories of this administration, which are numerous inspite of the challenges.

He said: “I have the privilege of being one of the senior figures in the defunct Congress for Progressive Change (CPC) who pull through the merger with the Action Congress of Nigeria (ACN) to form the party that ended Peoples Democratic Party’s sixteen year long hold on power at the centre.

“So, how were we able to achieve this momentous feat?

“We focused on politics with a heart, with the people in mind, from the rural areas to the metropolis, from the grassroots to the urban centres.

“We embodied the hopes of a better country and better politics in 2015 with the Change mandate, and not surprising the people showed their trust and belief by electing us for a second term in office in 2019.

“We also brought more states under the APC banner as our message of progressive change caught the imagination and hopes of the people!

“I must commend the valiant efforts of our party leadership and all previous executives for laying a proper foundation that could easily be built on but first we must put our house in order.

“The core of my message today is that the time has come for our great party to embrace the future and optimize its mandate and potentials. We have succeeded in righting the course of the nation through the administration of President Muhammadu Buhari.

“But what happens at the end of the eight-year tenure of President Buhari ? Where do we go from here especially as our great leader would not be on the ballot in 2023?

“As one who has grown within the political system, a bridge between the past and the future, I have the distinct advantage of unbiased perspective. I have seen the issues, I have identified the winning formula.

“I will fortify our wins and reduce opportunities for corrosive developments. I will lead from the front by providing firm, inclusive, proactive, disciplined, fair and transparent leadership as APC chairman.

“The proposed party governance approach under my stewardship will ensure that members are recognized and acknowledged. Programmes and plans of the party will be inclusive, strategically crafted, robustly debated and judiciously implemented.

“Ladies and gentlemen, even families have disagreements and there is bound to be friction but I will ensure that proper and transparent conflict resolution frameworks are in place.”
Source – The Nation