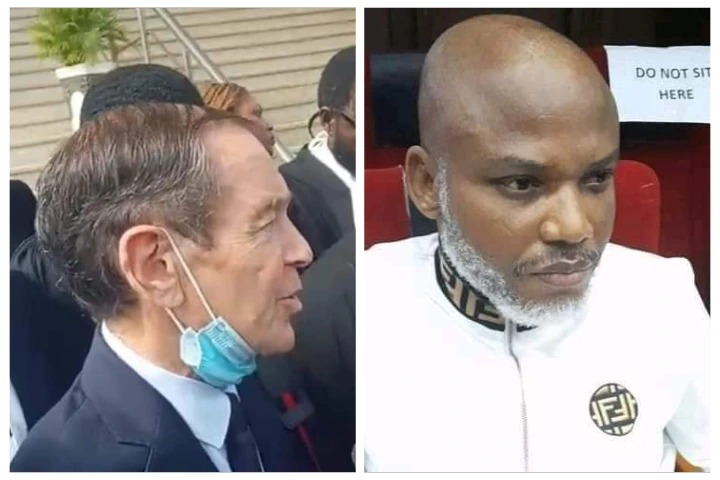 According to a report by Daily Post, the Department of State Services, DSS, on Wednesday barred journalists from entering the Federal High Court building, Abuja as the trial of Nnamdi Kanu, leader of the Indigenous People of Biafra, IPOB, continues on Wednesday.

The Counsel to Nnamdi Kanu, Ifeanyi Ejiofor even staged a walkout from the court as DSS operatives denied Bruce Fein, Mr. Kanu’s lawyer from the U.S access to the courtroom, and Nnamdi Kanu stated in open court that his counsel is not present in the courtroom but rather outside due to the refusal to allow Mr. Fein entrance to the court. Justice Binta Nyako held the walkout staged by Mr. Kanu’s counsel is an offense but she will not make any pronouncement on it. She subsequently adjourned proceedings till 19th January 2022.

The truth is that Court is not run on sentiment and emotion. Nigerians believe that these learned gentlemen such as Ejiofor know the law well. Why would Barrister Ejiofor abandon his client at that moment to intervene in matters happening outside the Courtroom? If DSS denied those lawyers access to the courtroom, is it not more ethical to draw the attention of the presiding judge, who in turn, would issue orders to DSS directing them to allow the lawyers access? Is he not engaging in acts of self-help at the moment?

Some Nigerians have faulted the DSS for not allowing Bruce Fein, a USA-based lawyer to Adjudicate for him. Those who said this are surely ignorant of the law. They don’t know that lawyers practicing in Nigeria must have been admitted to the Nigerian Bar. Without admission, a foreign lawyer cannot practice law in Nigeria except to a limited extent where he/she obtains a warrant from the Chief Justice for a specific proceeding or appeals arising from such proceedings, which Bruce Feign has not done.

To stand for someone in the court of law in Nigeria as a lawyer, the person has to be admitted to the bar as barristers and solicitors of the Supreme Court without any distinction as to their roles or functions.