Gov. Umahi Opens Up On The Alleged Rigging of The Anambra Governorship Election, Says He Did Not Accuse Soludo, Obiano 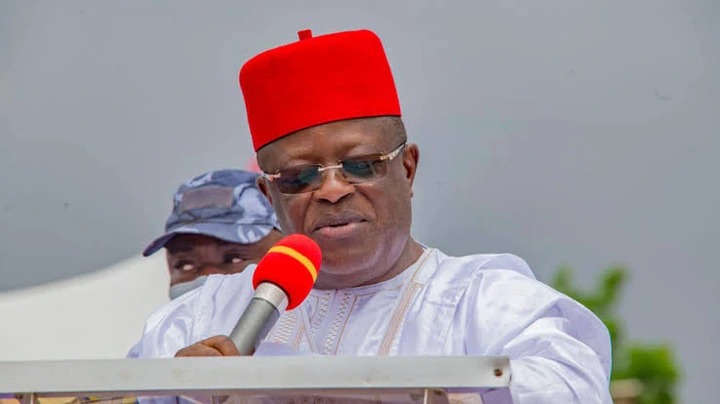 Governor Dave Umahi of Ebonyi state has reacted to claims attributed to him that the sitting governor of Anambra, Willie Obiano, and the governor-elect, Charles Chukwuma Soludo, rigged the gubernatorial poll in the state.

The viral reports claimed that the Ebonyi state government rejected the results of the election declared by the Independent National Electoral Commission (INEC), The Nation reports.

However, dismissing the report, the governor’s media aide, Nwaze Francis, made it known that neither the state government nor his principal has even commented on the election.

Nwaze categorically stated that Governor Umahi did not at any point make any such remark, adding that it would be wrong for him to speak on behalf of the All Progressives Congress (APC)’s candidate in the said poll.

He said: “Going by the foregoing, we hereby urge the general public to disregard the post as it has no iota of truth in it.

“We also like to use this medium to remind the poster and other Social Media purveyors of fake news that the State Law on fake news is very much in place to deal with potential recalcitrant.”

Oye while commending the president for ensuring that the election in the state is credible said President Buhari has over time proven to be a father.

The Sun reports that the APGA chairman gave the commendation to the president while speaking in Awka, Anambra’s capital city on Sunday, November 7.

Oye said the president did his best by allowing the Independent National Electoral Commission (INEC) has a free hand in the conduct of the state governorship election.

The APGA Chieftain said that while it was the plan of some politicians to use their mercenaries, the president had always ensured that the will of the people prevailed.

He further commended the people of Anambra for the manner in which they conducted themselves during the polls.

Stating that Anambra people are known to be quite peaceful, Oye said most of the violent incidents recorded in the state were perpetrated by individuals or groups imported into the state.