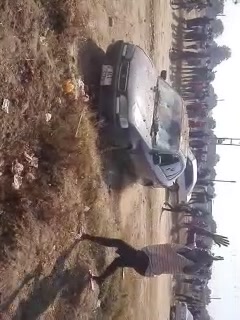 Update on the on going presidential elections coming in from Chawama.

An unidentified man has been arrested by soldiers in Chawama Secondary School polling unit in Solwezi after he tried to make away with some ballot papers.

Angry Solwezi residents attempted to attack and lynch him right there on the spot but for the quick intervention of the Army who immediately whisked him away from the raging crowd.

Someone among the crowd identified his vehicle and they proceeded to destroy the automobile to bits.

According to the video made available, the angry crowd is seen throwing heavy objects at the car for appease themselves, the event made innocent voters flee the gory scene as they scrambled for their life in fear.