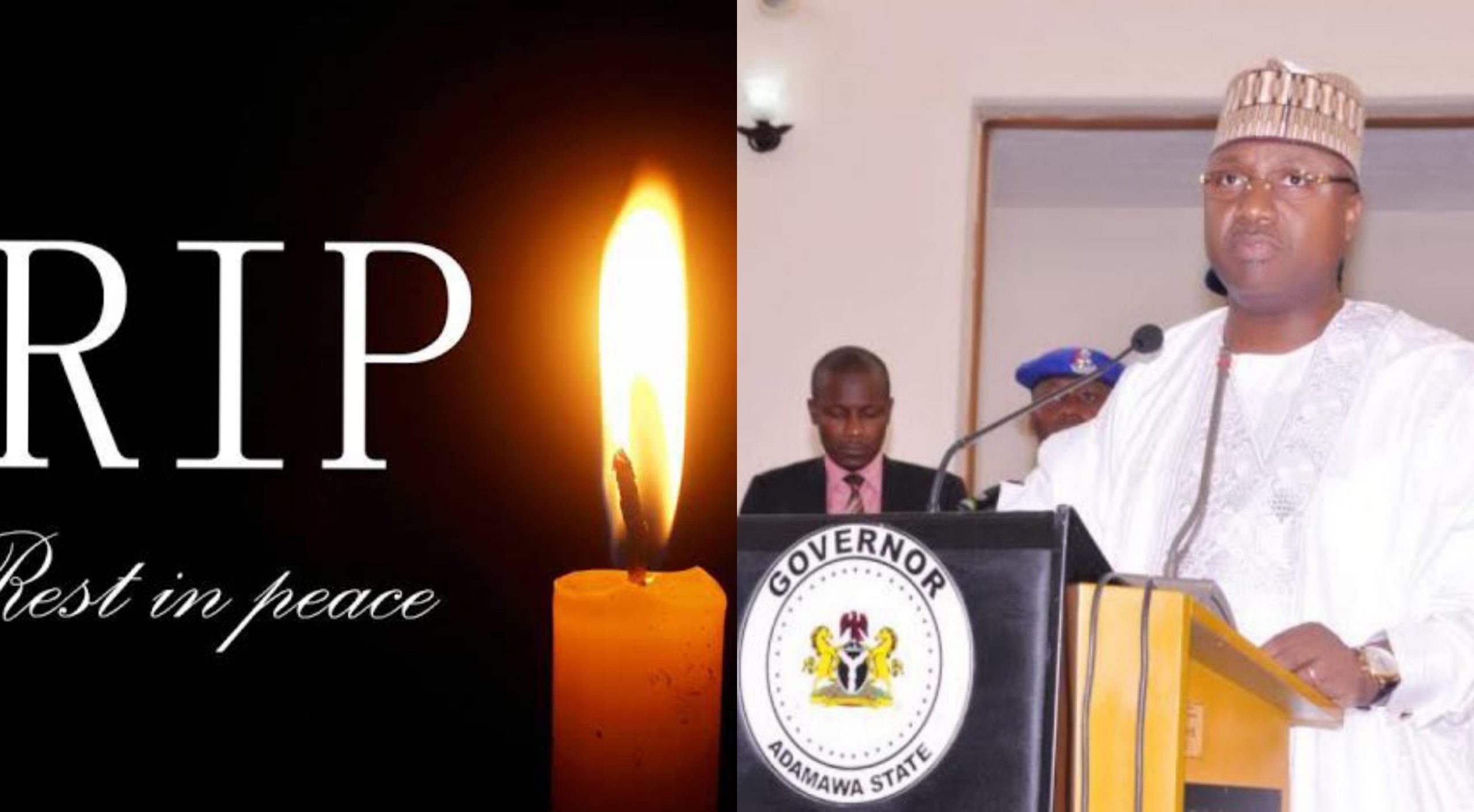 The Department of State Security Services, DSS invited a former governor of Adamawa State, Jibrilla Bindow over a controversial audiotape where some APC executives were criticising the President.

One of the executives was even heard wishing for the President’s death.

DSS operatives grilled them for hours.

Speaking on the situation, Bindow’s media aide, Sadiq Abdullateef, who also confirmed the DSS invitation, disclosed on Wednesday afternoon that his principal has since condemned the statements against the President.

The statement read in part: ”Former Adamawa State Governor, Senator Muhammad Umar Jibrilla Bindow was invited to a party meeting because some members of the party were aggrieved about the just concluded primaries, which he attended as an elder of the party,”

”It’s worthy of note that, there was no program in the said meeting, he went there and sat and listened to the aggrieved members’ complains, and there was an unwarranted outburst from some members which he cautioned, it’s sad that some people are using that outburst with a recording to malign the former governor.”

“The said recording was doctored and if you listened to it very well, there are some conversations that were skipped, Senator Bindow cautioned the members making those unwarranted utterances thrice in the meeting and even threatened to walk out.”

“His words were, ‘please this is not right, you don’t wish anybody death because of political reasons, talk less of our leader and father, the president. Let’s make progress please, or I am leaving’.”
Source – Politics Nigeria Reports of his death went viral on social media Wednesday morning but the cause is yet to be ascertained.

Until his death, he was the Director-General, Delta State Public and Private Properties Protection Agency.

In a condolence message by his media assistant, Francis Sadhere, the chairman said his “legislative sagacity, unassuming qualitative representation, respect for party’s ideology and ingenuity in fostering peaceful co-existence among the people of Warri South Constituency 2,” singled him out among his colleagues.

He condoled with the family of the deceased and prayed for God to comfort them during this trying period.
Source – The Nation Benue State Governor, Samuel Ortom has said the Peoples Democratic Party, PDP, has amicably resolved its internal wranglings and is poised for victories in future elections.

Governor Ortom said this on Wednesday at the Makurdi Airport during an interview with journalists on his return from Abuja where he attended an expanded stakeholder meeting as well as that of the PDP Governors’ Forum.

He said the party had resolved to remain focused in the face of intimidation and blackmail from the ruling All Progressives Congress, APC, stressing that the PDP is prepared to take Nigeria from bottom to top and not top to bottom as APC promised Nigerians in 2015.

Governor Ortom explained that the PDP has learnt its lessons and is willing to serve as a beacon of hope for the country’s democracy and as a party that is people-oriented with the capacity to provide a better alternative.

He said the 13 Governors elected on the party’s platform remain united in promoting its interest above other considerations.

The Governor noted that APC has failed Nigerians on all fronts including economy, security and its mantra of anti-corruption fight, stressing that Nigerians have been abandoned to their fate by the ruling party.

He stated that the meeting with other stakeholders of the PDP decided that the National Executive Committee of the party should call for an early convention slated for October 2021, saying all stakeholders endorsed the decision which is to be implemented according to the PDP constitution.

Reacting to claims by the APC in Benue that it had registered five million members, Governor Ortom said the claim was a 419 move by the party and a rehearsal for rigging in future elections.

He said the claim was against the overwhelming majority of members of the PDP in Benue which won the governorship, three senatorial seats, seven House of Representatives seats among others in the 2019 general election.

Governor Ortom described the moves to amend the Electoral Act by the National Assembly as another fiasco aimed at denying Nigerians the right to have their votes count, insisting that a push for manual transmission of results was against the tenets of credible and transparent elections.
Source – Daily Post

JUST IN: 10 Things you must know about New Toll Gate Policy on Federal Roads The Nigerian Government has approved the return of Toll gates on all Federal roads in the country.

POLITICS NIGERIA has listed 10 important things every Nigerian must known about the new policy titled ‘Federal Roads and Bridges Tolling Policy and Regulations’.

3. Toll Revenues will be used to maintain the roads and also to repay investors who have invested in building or completing a road under the Highway Development Management Initiative (HDMI).

4. Electronic Toll Collection and Management systems will be prioritized over Cash systems.

5. The following will be exempted from Tolling: Bicycles, Tricycles, Motorcycles, Diplomatic vehicles, Military and Paramilitary vehicles.

6. The Tolling Policy is a broad National framework that will serve as a guide for States and Local Governments who seek to implement their own Tolling Policies. (As noted earlier, only about 16% of the total road network in Nigeria belongs to the Federal Government. States own/control roughly the same amount as the FG, while the rest – amounting to two-thirds are last-mile roads belonging to and under the responsibility of Local Governments).

7. People who live around Toll Plaza Areas will benefit from what is called ‘Frequent User’ discounts, in line with global best practice.

9. According to the Honorable Minister, the Federal Highways Act vests the power to toll (Federal Roads) in the Minister responsible for roads, but implementation of any tolling policy/
regime involves many processes and multiple agencies, and therefore requires multi-stakeholder collaboration.

10. According to the Minister, it is important to stress that even with this policy now approved, tolling is not going to start immediately. He very clearly said that Tolling will not start “until the roads are motorable.” This policy is a necessary condition for the implementation of Tolling, and it is now for people to start getting familiar with it and for relevant stakeholders to start using it as a basis for their financial modeling and investment analysis, ahead of the eventual rollout of Toll Plazas.
Source – Politics Nigeria Adeseye Ogunlewe, a former Minister of Works, has said the southeast cannot produce a president in 2023.

Ogunlewe said the inability of the people of the southeast to unite under a common leadership would work against their presidential ambition.

He disclosed this while featuring on Arise TV’s ‘The Morning Show’ programme on Wednesday.

The former minister also pointed out that the lack of cohesion among the southeast people would work against them.

He said: “Another set of people that are appropriate, they are the people from the Southeast but they have the problem of leadership.

“They are so endowed that they are spread all over Nigeria and they can gather a lot of votes, but they are too divided. An Imo person, an Enugu person, an Ebonyi man will not listen to themselves.

“They have the money. If they sit down and aggregate what they can offer, they have more money than almost everybody in Nigeria.

“But have you seen one person from the south-east that said ‘I am interested in the presidency, I will start to campaign all over Nigeria immediately, raise money for me?’ and influence the structure of the party?”
Source – Daily Post Davido, with close to 21 million followers, has emerged the highest paid Instagram influencer from Nigeria and second highest in Africa after Mohammed Salah.

This does not include any compensation he receives for participating in commercials for the promoted products.

She is followed by actress, Funke Akindele Bello on number 70 who has over 13 million followers and makes $83,600.

Nigerian pastor identified as Eli Dilli, has allegedly absconded with N518,000 hotel bill in Yola, Adamawa state, according to Reporters.

Dilli, who is the district pastor of Lutheran Church of Christ (LCCN), Jalingo, Taraba state was said to have lodged at Tufini Hotel, Yola, Adamawa state, but allegedly absconded without settling bills to the tune N518,000.

The cleric, as gathered, dropped the name of Adamawa State governor, Ahmadu Fintiri, to win the confidence of the hotelier.

He was said to have lodged in the hotel between November 2018 and April 2019, spanning a period of six months.

During the period, the clergyman incurred a bill of N518,000, covering accommodation and feeding.

The pastor, however, fled without settling his bills, according to the manager of hotel, James Joshua.

At the hearing, the First Information Report (FIR) containing the charge bordering on cheating as filed by the prosecutor, Sergeant Sawe Nicholas, was read to the defendant and he pleaded “not guilty”.

In his ruling, the judge, Aliyu Bawuro, ordered that the cleric be remanded in prison custody until April 16, 2021 when the prosecution team will present their witnesses.
Source – Gistlover

“Annie Idibia, you are snake” Actress Lynda Clems calls out her colleague in a series of posts “Annie Idibia, you are snake” Actress Lynda Clems calls out her colleague in a series of posts

Actress, Lynda Clems has slammed Annie Idibia, calling her a ”snake and a criminal.” Lynda shared a photo of Annie on Instagram and called the mother-of-two a “very evil one”.

She then took to her Instagram Stories to call Annie a “criminal” and a “bitch” before adding that Annie has pushed her to her limit.

Lynda did not give a reason for the call-out.