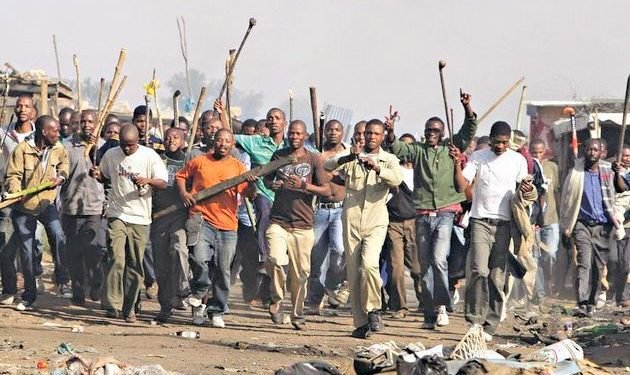 Suspected cultists went on a rampage in Otto Awori and Ijanikin communities of Lagos state on Sunday.

Both communities located in the Ojo Local government area of Lagos came under heavy attack on Sunday afternoon in a free-for-all by waring cultists.

Although the cause of the crisis was yet to be ascertained when Vanguard got to the scene, Police officers attached to Ijanikin Divisional Police were seen shooting canisters of teargas into the air from the Vespa bus stop to Ile Oba bus stop as the suspected cultists were seen fleeing.

The proposal by South-West governors for a six-region structure in the country is generating controversy in the region as Yoruba Elders rejected the proposal, insisting on a new constitution rather than the amendment of the one currently in use.

Contrary to the position of the governors, the Yoruba Council of Elders (YCE) said what the nation needs is not an amendment of the current constitution but a new constitution that will give expression to the differences of the component units and reflect the yearning and aspirations of the Nigerian people.

“The 1999 Constitution (as amended) from its very first sentence lied against itself by saying ‘we the people of Nigeria,’ whereas the people were never consulted,” the Secretary-General of the Yoruba Council of Elders (YCE), Dr Kunle Olajide said.

The South-West Governors have proposed the conversion of the present six geo-political zones into federating units, as part of the ongoing review of the 1999 constitution by the National assembly. The governors presented a document to members of the National Assembly from the zone and made other proposals to weaken the central government while allocating more powers to states.

The governors had met with the lawmakers in Abuja behind closed doors with the proposals reportedly presented to the southwest caucus of the national assembly penultimate Tuesday.

After the meeting, Akeredolu had said that the southwest would be approaching the constitution amendment with a common front. He added that the meeting had set a committee made up of senators, led by the caucus chairman, Senator Opeyemi Bamidele, the House of Representatives Caucus, led by Hon. Femi Fakeye, and attorneys-generals of the south-west states.

“The committee is to harmonise our position so that we can present it when necessary before the two houses and, at the end of the day, have a constitution amendment and have our serious inputs”

Olajide told Sunday Vanguard that it is immoral to call the people of Nigeria, either through elected governors or lawmakers, to amend the constitution they were never part of the making.

“Bringing power to the state, giving local government autonomy, that is anti-federalism. In a federal system of government, the local government should be the responsibility of the state; in fact it is not usually listed in the national constitution.”

“National Assemble has no business with the funding of the local government, so there is lack of understanding of this system because, if you allow the federal government to fund local governments directly, whatever political party is in power at the center can undermine state governments in opposition through funding.”

“This is why in a proper federal system, local government business is entirely state business”