Dr. Banda, Kambwili And GBM Laugh Off Claim By UPND Hunger Made Them Join PF 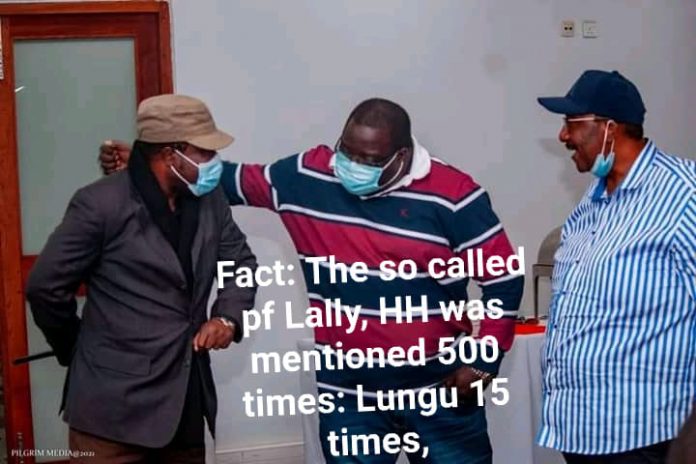 Patriotic Front Members who are former United Party for National Development(UPND) members Dr. Canisius Banda, Chishimba Kambwili and GBM have described as preposterous the assertions by the UPND that they joined the PF because of hunger.

Speaking at a PF round table talk hosted by Nakiwe Simpungwe, Dr. Banda said he is a qualified medical doctor, a product of the University of Zambia who is a masters degree holder in public health and that he is a lecturer at several institutions of learning such as UNZA, a CV which clearly shows that talk of hunger in his life is just wishful thinking by the desperate opposition.

Dr. Banda said it was therefore desperation that was causing the UPND to tell non-truths about him and urged them to focus on issue-based campaigns, adding that had he been the type of person that joined causes for wealth purposes, he would have joined PF the very first time he left MMD to Join UPND and that the UPND actually owed him a debt of gratitude because he had helped to remove the stench of tribalism from their leader HH, the time he served as his Vice President.

Dr. Banda said HH was a tribalist without a shred of doubt which was why the UPND was habitually adopting Tongas as their candidates for elections at all levels and urged the ECZ to take a keen interest in the manner the UPND had adopted their candidates because it was definitely a security risk to the nation.

Dr.Banda further said that PF has delivered unprecedented development in the nation, the period the party has been in government, citing hospitals, schools, and roads that have been built. Dr Banda also said that PF has provided farming inputs and expanded and built power generation plants which have ended load shedding in the nation, and that these and many other deliverables are evidence of a party and government that has put in the work which is producing results .

Dr. Banda dismissed assertions by UPND, that the Patriotic Front May have built health facilities, but not equipped them with human resources, saying the PF Government had employed 27,000 health workers in the period between 2016 to 2021, something which had never been done in the history of the nation, including the 200 Medical doctors who had been employed in the recent past, which is extremely commendable because the action helped to address the serious issue of the pandemic which the nation is currently grappling with.

Dr. Banda said that the UPND had nothing to talk about because each point they were raising in their campaigns, the PF had already delivered or were already in the process of delivering and lauded the Manifesto of the PF as a superior document to that of the UPND and pointed at items such as the proposed 24-hour economy as a solution to the issue of youth unemployment.

Dr. Banda took time to urge the people of Zambia not to make the mistake of voting for any other party than the PF because the PF and President Lungu were bringing to the table tried and tested Leadership which has proved its worth.