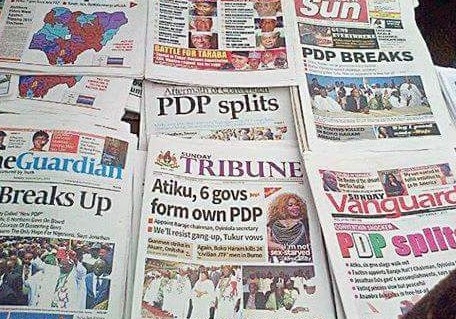 Former presidential aide Reno Omokri, says he will be staging a protest against president Buhari in UK.

According to Reno, the #HarassBuhariOutofLondon march will be taking place on Friday, April 2 in London, United Kingdom.

In the video shared online, Reno said President Buhari needs to be harassed and forced out of UK because he did not acknowledge the Lekki Toll Gate killing.

Reno added that the president cannot be allowed to go to the UK to seek better health care when he hasn’t accounted for killing of EndSARS protesters at the Lekki Toll Gate.

He said; ‘We must harass Buhari out of London and back to Nigeria. On October 20, 2020, this man killed peaceful, unarmed EndSARS protesters at Lekki tollgate. He didn’t care for their life. He just masaccred them. But he cares for his own life. After having dished out death to young Nigerians who were only asking for good governance for their country, this man now wants to come and enjoy the benefits of good governance. After he has given death in Nigeria, he wants to come and give life to himself in London, No! We must not allow it.

He added: “When his own son, Yusuf, had an accident, I prayed for him. Millions of Nigerians prayed for him and then he went to kill our own children at Lekki. What were they doing? They were just asking for good governance, Asking for an end to police brutality. Till today, he has not acknowledged those killings, he has not apologised, they have not been paid compensation, parents are crying. I have reached out to so many of them.

This man must not be allowed to enjoy peace in London.”

The Indigenous People of Biafra, IPOB, have accused Nigerian Security agencies of aiding and abating murderous herdsmen to kill Biafran people of Ebonyi and Enugu States

IPOB while reacting to the alleged killing of herdsmen in Ebonyi State, through its Media and Publicity Secretary, Emma Powerful, said they in IPOB and ESN are chasing Fulani terrorists, herdsmen, in the whole of South East and South-South and we will spare terrorists when they get them.

IPOB statement read in part, “It is now clear and open to the public how Nigeria security agencies are aiding and abetting murderous Fulani terrorists herdsmen to kill our Biafran people in Ebonyi and Enugu States.

“Nigeria security agencies are giving them cover to attack the villagers in these two states because Nigeria Army and Police in uniforms are terrorists Nigerians and Nigeria as a country are suffering today.

“If Nigerians and communities want to be free from terrorism, they must openly reject Nigeria security operatives in the country, they are all terrorists and working for terrorists.

“How can security agencies that are supposed to protect and secure innocent citizens will be providing cover for terrorists to attack people, that is what IPOB is talking about. A popular human rights lawyer, Femi Falana (SAN), and other notable Nigerians have set motion in place to form a mega movement ahead of the 2023 general elections.
Naija News reports that the movement named “The Peoples Alternative Political Movement”, is set to challenge the ruling All Progressives Congress (APC) and the opposition Peoples Democratic Party (PDP) in the forthcoming election.

Promoters of the movement, Wednesday, met in Abuja and named Prof. Toye Olorod as co-chairman of the committee and Jaye Gaskiya as Secretary.

In a communique issued at the end of the meeting and ‘endorsed’ by about 30 different groups, the promoters said, “The new movement will build a new country based on justice, equity and protection of the dignity of mankind irrespective of ethnicity, faith or creed.

“We shall make Nigeria great again and put the country back on her status as the giant of Africa’, the promoters said as part of their mission statement.”

Everyone sure has a story to tell about their growing up, and Mavin record boss, Don Jazzy, is not left out on this.

The music producer and record label artiste Michael Collins Ajere popularly known as Don Jazzy shared his story on how he sold akara,(bean cake), during a recent Black Box interview with Ebuka Obi-Uchendu.

Air Force Jet deployed against Boko Haram goes missing in Borno
Garba Shehu: Why Buhari didn’t transmit power to Osinbajo
The philanthropist talked about several issues including his mansion, living in a rented apartment, his family, growing up, among others.

He said he grew up in Ajegunle and later moved to Egbeda in Lagos State at age 11.

Don Jazzy said his memories in Ajegunle were of school, coming home, following his dad to the farm, and later joining his mum where she sold Akara in front of the house.

“My growing up was amazing, beautiful. I grew up in two places, Ajegunle and Egbeda. First, Ajegunle, I was born in Ajegunle. I moved to Egbeda when I was about 11 years old.

“My memories of Ajegunle includes four or five things. School, which was primary school; come back home, follow my dad to the farm, which was at the back of the house, then come back in the night, join my mum who sells akara in the front of the house. Then in the morning my brother and I will walk to go and carry agidi.

“We used to go and carry it from the woman that my mother ordered it from. They used to make it early in the morning; so, it is hot and still like pap. We will bring it back home before it turns to agidi (like eko) then we go to school.

One of the crucial recommendations at the 69th annual meeting of the governing board of the West African Examinations Council, WAEC, was the need for Ministers of Education in member-states to get a forum where issues on education would be discussed. The member-states are Gambia, Ghana, Liberia, Nigeria and Sierra Leone. In a statement by the board signed by Public Affairs, Head of WAEC, Accra, Ghana, Adulujo Abiodun, the Council at virtual week-long event, held from March 22 to March 26, approved the election of Prof. Ato Essuman from Ghana as the 20th Chairman of the sub-regional organisation for a three-year tenure. Professor Kwasi Opoku-Amankwaas was elected Vice-Chairman of Council for the one-year period.

In his keynote address, President of Ghana, Akufo-Addo described WAEC as a dominant institution in the West African sub-region which had consistently produced leaders in various fields of endeavour and a workforce to drive the economy. He commended WAEC for regularly generating reports and statistics to guide the member countries in policy formulation and implementation. He also congratulated the Council on the successful execution of its mandate in 2020 despite the COVID-19 pandemic.

While he expressed delight over the impressive performance of the first batch of beneficiaries of his government’s Free Senior High School Policy who sat WASSCE in 2020, President Akufu-Addo pledged on more collaboration between the government and WAEC. …as Ghana tops Nigeria, others in 2020 WASSCE At the formal opening of the meeting, three candidates, all from Ghana, were honoured with the WAEC International Excellence Award for their outstanding performance in WASSCE in 2020. They were Master Cecil Tetteh Kumah (1st Prize), Master Godfred Aseda Obeng (2nd Prize) and Miss Afua Manukure Ansah (3rd Prize).

They were selected from a total of 2,122,844 candidates who sat the examination in the five-member countries. The Augustus Bandele Oyediran Award for the Best Candidate in West Africa also went to Master Cecil Tetteh Kumah. In addition, the prestigious award of Distinguished Friend of Council was conferred on an eminent citizen of Ghana, former university lecturer and Chief Examiner, Dr. John Anum Sakey, for his outstanding contribution to the success of the work of WAEC. The meeting also featured the 26th in the series of Annual WAEC Endowment Fund Lectures titled “Treading on Slippery Ground: Calling Education to Account”, which was delivered by Prof. Kafui Etsey of the Department of Education and Psychology, University of Cape Coast, Ghana.

Liberia’s President George Weah has imposed a night-time curfew on the coastal county of Maryland after days of violent demonstrations involving tens of thousands of mostly female protesters.

At least 90 inmates on Wednesday escaped from a prison during the protests in Harper city, near the border with Ivory Coast.

Police spokesman Moses Carter told the BBC the demonstrators broke into the county’s prison compound in search of an alleged killer of a motorcyclist, resulting in the jailbreak.

He said the rioters also set fire to the home of the speaker of the house of representatives, who hails from the region.

Police struggled to contain the protests because as many as 20,000 and 30,000 were involved, the spokesman added.