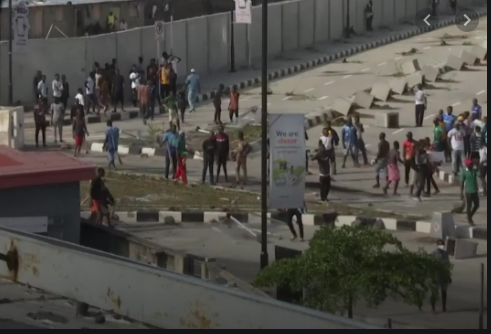 Arewa youths give Igboho 72-hrs to evacuate Yorubas from north

Northern youths have told rights activist Sunday Adeyemo aka Sunday Ighoho to move all Yorubas from northern states in the next 72 hours. They threatened they will be forced to evacuate all Yorubas resident in the north after expiration of the ultimatum.They also solicited support of northern elders, traditional rulers and security agencies in their resolve to evacuate Yorubas from the19 Northern states and Abuja.

They sad the decision was informed by declaration of Yoruba nation by Ighoho on Wednesday. The youths, under the auspices of Arewa Youth Assembly also issued a 72-hour ultimatum to Igboho to move Yoruba out of the North, else they would be forced to evacuate t

Arewa Youth Assembly, in a statement issued by its Speaker, Mohammed Danlami argued Igboho had continously threatened lives and properties of northerners residing in the South-West for no reason.

They said since it is Igboho who wants Yoruba out of the North to form a Yoruba nation, Northern youths will make it easy for him by asking him to provide a means of transportation to convey his people to the south west.

According to them: “”We are hereby giving him the ultimatum of 72hrs to move his people out or we will be forced to take necessary actions by personally taking the responsibility of getting his people back home.

“It is in the lights of this recent event that we wish to call on the Northern elders, traditional rulers and all security agencies to support us in accomplishing this task of evacuating the Yorubas out of the 19 Northern States and the FCT Abuja, making it a very peaceful exercise devoid of loss of lives and destruction of properties or hijack by hoodlums to prevent the re-occurance of the end-sars protest.” The South West region will soon unveil a joint security outfit to further fight the insecurity in the region, the Aare Ona Kakanfo, Chief Gani Adams has declared.
He revealed that the security outfit will consist hunters, Odua Peoples Congress (OPC) and Agbekoya members who will all have the mandate to secure the lives and properties in the region.

Adams added that the matter is already a subject of discussion before the governors of the region.

He made the declaration on Thursday during a private visit to Governor Seyi Makinde of Oyo State where issues related to the security and economy of the South-West were discussed.

He said: “I met the governor of Ekiti State two days ago and now, I am meeting the Oyo State governor.

“It is very important that we interface on the prevailing issues within our region, especially that of security. What we are witnessing now is alien to our history. Yoruba nation has been in existence for more than 8,000 years, I mean the Western region.

“We had a fruitful meeting. I can tell you that we are on the same page that Oyo State and the entire South-West should be in peace and harmony.

“The issue of agriculture was also part of our discussion. The two governors have told me their own parts and strategies, especially on the basis of private initiative. I want to assure that we too will play our own part to bring investors to partner with them.

“We have more confidence to complement the effort of the community. We have brought all the relevant security outfits together; hunters, OPC members, Agbekoya members. We are bringing them together so that we can have effective security in our environment.”

Meanwhile, Yoruba activist, Sunday Igboho has been given 72 hours by the Arewa Youth Assembly to move Yoruba people from the North or they would be forced out of the region.

The group explained, “We are hereby giving him the ultimatum of 72 hours to move his people out or we will be forced to take necessary actions by personally taking the responsibility of getting his people back home.”

The speaker of the assembly, Mohammed Salihu Danlami, in a statement released on Thursday evening, noted that the entity of Nigeria is non-negotiable.

Danlami called on all concerned parties in the country to reject anything that would cause confusion in the land.