Residents of Orlu council area of Imo State have reportedly deserted their homes as the military continues a search for the camps of the Eastern Security Network (ESN).

DAILY POST gathered that the presence of the military has crippled economic activities in the area.

The Imo state Commissioner for Justice and Attorney General, Barr. C. O. C Akaolisa, while speaking on the crisis over the weekend, said that the government deployed the military to intervene on the extra judicial killings perpetrated by members of the ESN…READ MORE>>> The Ohanaeze Ndigbo Youth Council, on Monday, condemned in strong terms the arrest of the former Governor of Imo State, Senator Rochas Okorocha.

Okorocha was arrested by the operatives of the Imo State Police Command on the order of Governor Hope Uzodinma of Imo State.

This has been seen as the height of the on-going power tussle between the two political leaders in Imo State, who are both members of the ruling All Progressives Congress, APC…READ MORE>>>

A combined team of military, police, and Air Force personnel has raided the Eastern Security Network camps linked to the proscribed Indigenous People of Biafra in the Orsu Local Government Area of Imo State.

A report by the Punch on Sunday revealed that the camp of the ESN operatives located inside the thick forest in Udah village, Orsu LGA of the state, had been taken over by the military.

It was gathered that the combined military operation, which led to the capture of the ESN camp in Udah village, was led by a Deputy Commissioner of Police, Abba Kyari, the Inspector leader General of Police Intelligence Response Team from the Force Headquarters, Abuja…READ MORE>>>

The defection of former Osun State deputy governor, Iyiola Omisore, from the Social Democratic Party (SDP) to the ruling All Progressives Congress (APC), may have set the tempo for a full blown crisis.

This is as former governor and current Minister of Interior, Rauf Aregbesola, seems to have a different view over the admittance of Omisore into the progressives‘ fold.

While revalidating his membership of the party in the ongoing registration exercise of the APC at his Ifofin, Ward 8, Ilesa East local government area of the state at the weekend, the Minister said that killers have now joined the party and will destroy it in the long run…READ MORE>>>

Jonathan Complains of Neglect By PDP 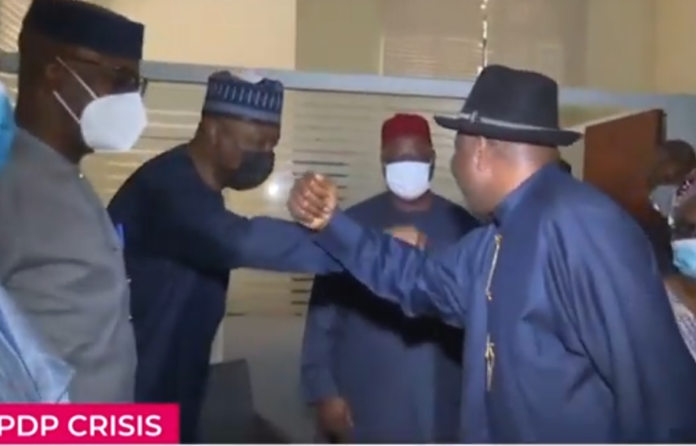 Fresh facts have emerged on what transpired at the recent closed-door meeting between former President Goodluck Jonathan and the Reconciliation and Strategy Committee of the Peoples Democratic Party (PDP) led by a former President of the Senate, Dr. Bukola Saraki.

A source privy to the meeting told THISDAY at the weekend that Jonathan complained to the Saraki-led committee that the PDP left him in the dark, without any role assigned to him.
According to the source, Jonathan told the committee that the All Progressives Congress (APC) was trying to poach him because the PDP did not carry him along in its activities…READ MORE>>>

I Have The Strongest Political Structure – Okorocha To Uzodinma After Arrest Former Imo State Governor, Rochas Okorocha, has boasted that he has the strongest structure in the state.

He accused Governor Hope Uzodinma of unleashing hundreds of thugs against him on Sunday.

Okorocha and his associates were arrested after he supervised the unsealing of Royal Spring Palm Estate, Owerri…READ MORE>>>