Nigeria Will Break Up, ‘We Are Not Begging Anybody, Igbo Man Must Be President Come 2023’ 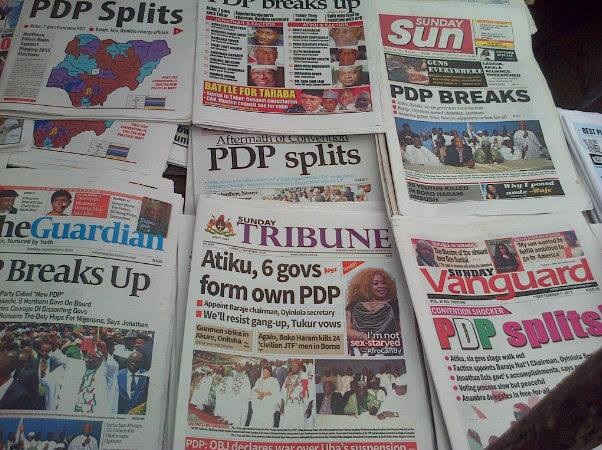 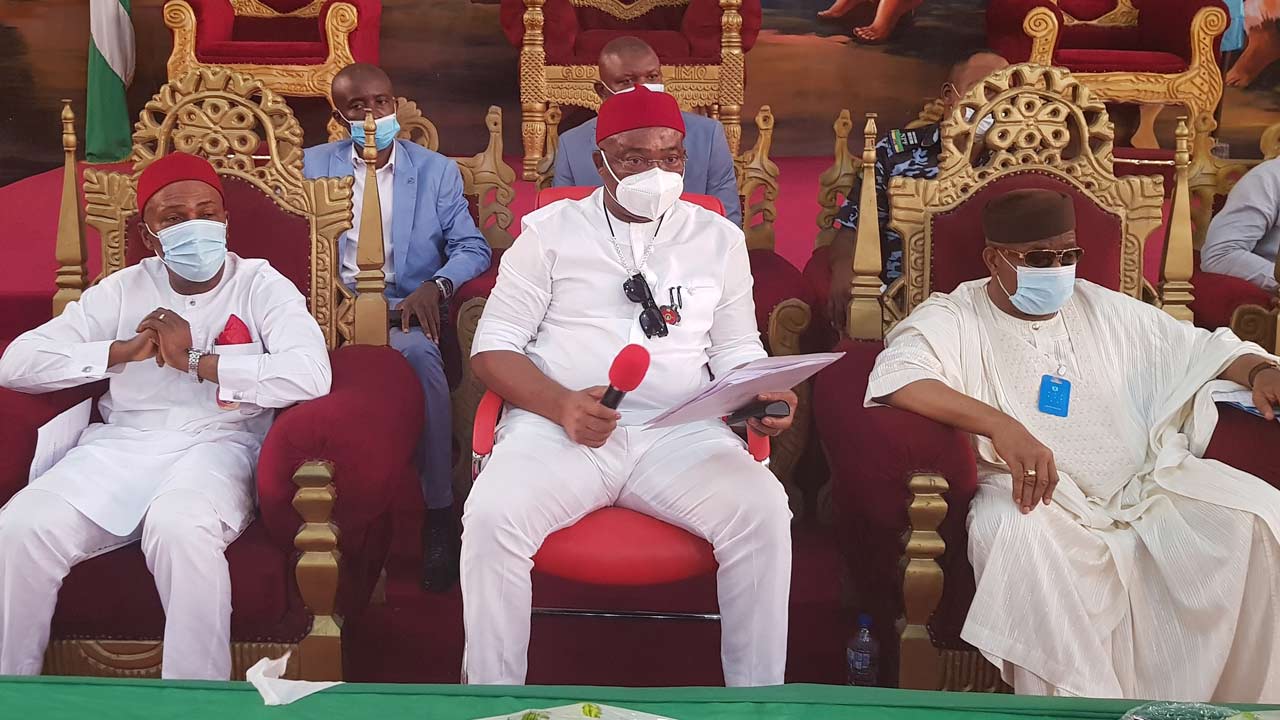 All hopes that leaders of Southeast geopolitical zone would play as united team towards the 2023 general election cycle were shattered yesterday, when stakeholders from the zone met in Owerri.

The stakeholders resolved to do all in their powers to win the forthcoming Anambra State governorship poll, even as they harped on the need for conscientious membership registration and reconciliation of party structures from ward to state levels.

In his remarks Governor Uzodimma said APC in Southeast had all it would take to dominate the zone, stressing the need for unity, brotherly love and genuine reconciliation.

He noted that the Anambra governorship poll was the ground to demonstrate the resolve of the party to capture the zone. He therefore appealed to members to shelve petty animosities and antagonism to work towards winning the election for the party.

“I believe that winning Anambra governorship will make the party stronger in the zone. And we can only succeed in doing this through genuine reconciliation and unity among members of the party,” the governor stated.

The governor regretted recriminations among party members in the zone, stressing that such grievances constitute the major problems confronting APC, just as he noted that the process of reconciliation should begin immediately to strengthen and fortify the party for future elections in the country.

His words: “The problem confronting APC in southeast is grievances, and we must begin today to address it, this will help our party, we need to reconcile all aggrieved members, our party would be stronger and we also urge all of you to help secure victory in Anambra.”

Also speaking, the Minister of Science and Technology, Onu, affirmed that Southeast people are yearning for APC, assuring that it was for “this reason that APC would win the forthcoming Anambra State governorship election.

Former President of Senate, Nnamani, informed the stakeholders that registration will commence from the unit levels, where members will cast their votes, stressing that the process will enable the party to actually know its strength at every unit.

Nnamani therefore pleaded with members to take the registration seriously just as he urged party faithful to immediately take part in the process.

Speaking through his representative, Senator Agbo, Umahi said he was happy to be in “the midst of progressive members of the party in the zone.” He disabused the minds of members, especially those who said he was not in good terms with his Imo state counterpart, assuring that he would work with Uzodimma to make sure other governors join APC from the zone.

MEANWHILE, Igbo leaders, yesterday, restated the call for the next President to emerge from South-East.

They spoke at a Solidarity Conference organised by Global Movement for Igbo President 2023 and United for Better Nigeria Initiative. The conference focused on the emergence of an Igbo President.

In his opening address, a First Republic minister, Chief Mbazulike Amechi, expressed the hope that the emergence of an Igbo man of South-East zone as President would resolve leadership crises in the country.

A former Women Affairs Minister, Josephine Anenih, said the Igbo believe in one Nigeria in spite of deprivations and provocations, saying it justifies the need for an Igbo President to address the myriad of challenges confronting the country.

The chieftain of the Peoples Democratic Party (PDP) said the conference was part of efforts to consult widely towards ensuring that every Nigerian supports the quest by the region to produce the next President.

Similarly, the National Chairman of African Democratic Congress (ADC), Chief Ralph Okey Nwosu, stated that being one of the six zones in the country, “it is not out of place if Igbo or South-East comes up that it is their time to rescue Nigeria.”

He appealed to Amechi to ensure realisation of the dream of Nigeria’s founding fathers.

Igbo youths were not left out in the agitation as the National President of Ohanaeze Ndigbo Youth Wing, Arthur Obiora, said 2023 President must be an Igbo man.

Obiora, represented by the Director of Planning and Strategy, and leader of Igbo Young Politicians Forum, Tony-Ezekwelu, an engineer, said:
“We are not begging anybody, Igbo man must be President come 2023.

He urged political parties to zone their 2023 presidential tickets to South-East.

“If they want us to remain as multi-ethnic nations that Nigeria is, we will remain and build Nigeria as a country where there is peace, justice, equity and fairness.

“We are not begging anybody, Igbo man must be President come 2023. Those who are supporting Bola Tinubu and former President Goodluck Jonathan and Atiku Abubakar want to break Nigeria up.” According to him, rotational Presidency should start with Igbo ethnic nation.

Sagay, a senior advocate of Nigeria, urged Buhari and the Inspec­tor General of Police, Mohammed Adamu, to allow Nigerians to protect themselves.

2. COVID-19: CAN Declares Final Position On Cross-Over Services
The Christian Association of Nigeria (CAN) has told churches and church leaders to follow government instruction in their respective locations as it concerns the cross-over services.

The umbrella Christian organization in a message on Tuesday by its National President, Rev Dr. Samson Ayokunle urged churches to respect and obey government orders as touching this year’s cross-over worship.

3. We Will Fight Food Inflation In 2021 – Buhari
President Muhammadu Buhari has promised that his government will monitor food inflation in the new year 2021.

He made the pledge during the 5th Presidential Economic Advisory Conference held at the Presidency on Tuesday.

The president also instructed the Central Bank of Nigeria (CBN) not to dare to give foreign currency importers foreign exchange.

4. 2023: Afenifere Denies Endorsing Tinubu, Fayemi, Bakare
The spokesman of the pan-Yoruba group, Afenifere, Yinka Odumakin, on Wednesday disclosed that the National Leader of the All Progressives Congress, Bola Tinubu, is not the main leader of the Yoruba people.

Odumakin stated this on Wednesday during an interview with Punch.

The Afenifere spokesperson further stated that the former Governor of Lagos State, Ekiti State Governor, Kayode Fayemi, or any non-Yoruba aspirant has been endorsed for the 2023 presidency.

5. Two Soldiers Wounded As Nigerian Army Kills Boko Haram Fighters In Borno
Troops of the Nigerian Army have inflicted further casualties on Boko Haram terrorists after the two parties clashed at Tunkushe village in the northeastern part of Borno state.

The troops reportedly ran into an ambush set up by the terrorists in Tunkushe which is about 20 kilometers away from Maiduguri, the Borno State Capital.

Naija News gathered the terrorists appeared in military uniforms and were driving two Hilux vans mounted with Anti Air Craft guns when the military ran into them.

6. COVID-19: Gov. Makinde Suspends Curfew In Oyo To Allow Cross-Over Service
The Oyo State Governor, Seyi Makinde has suspended the 12 a.m. to 4 a.m curfew in the state to make room for the cross over service by adherents of the Christian religion.

The Governor made this known in a statement on Wednesday by his Chief Press Secretary, Mr Taiwo Adisa.

The statement, however, warned that all other COVID-19 protocols must be observed in the gatherings at worship centres, urging residents to remain safe during the yuletide and after.

7. COVID-19: Presidency Issues Fresh Directive To States On Labs, Isolation Centres
The Presidential Task Force (PTF) on COVID-19 has directed all 36 states of the Federation and the Federal Capital Territory (FCT) to reopen all laboratories and isolation centres.

Speaking to newsmen at a briefing on Tuesday evening, Chairman of the PTF, Boss Mustapha, also asked states and the FCT to increase COVID-19 testing.

8. Nigeria Would Have Been In Trouble If Borders Were Not Closed – Buhari
President Muhammadu Buhari, on Tuesday, noted that the closure of land borders by the Federal Government saved Nigeria from trouble.

Recall that the Buhari-led government in August 2019 closed the nation land borders to curtail illegal importation of drugs, small arms, and agricultural products into the country from neighbouring West African nations.

The President, however, on December 16, ordered the reopening of the closed borders after being shut for over a year.

9. COVID-19: January Will Be A Tough Month – Iheakwazu Claims
The Nigeria Centre for Disease Control on Tuesday disclosed that the health system of this country is struggling to cope with the increasing number of coronavirus cases.

The agency further stated that there would be an increase in COVID-19 cases by January 2021.

The Director-General, NCDC, Dr Chikwe Iheakwazu, while speaking at the briefing of the Presidential Task Force on COVID-19 on Tuesday, said, “We just faced the worst week since we started responding to this outbreak. We had more cases in Nigeria last week than in any other previous week since the beginning of the outbreak.”

10. President Buhari To Sign 2021 Budget On Thursday
Nigeria President, Muhammadu Buhari, is expected to sign the 2021 Appropriation Bill into law on Thursday.

Recall that the National Assembly before embarking on holiday had passed the N13.58tn budget for the next fiscal year.

The current government over the years has shared its desire to restore the country’s budget to January to December cycle.