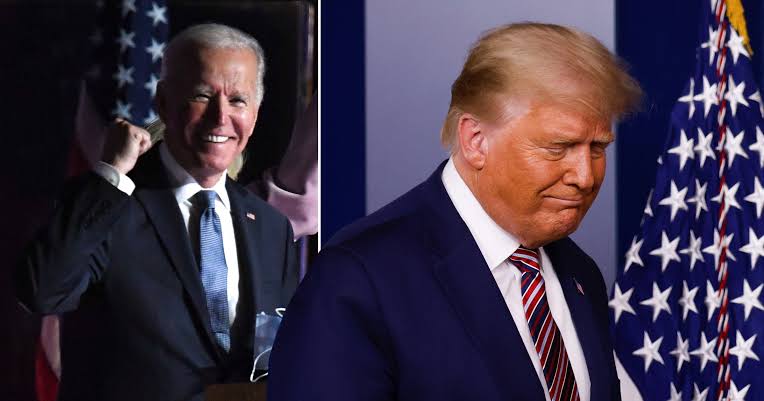 Donald Trump, refusing to concede defeat in the US presidential election, said Saturday that Joe Biden was “rushing to falsely pose as the winner” after television networks declared the Democrat’s victory.

“We all know why Joe Biden is rushing to falsely pose as the winner, and why his media allies are trying so hard to help him: they don’t want the truth to be exposed,” Trump said.

“The simple fact is this election is far from over.”

Trump underlined that states had not yet certified the results, and his campaign has launched multiple legal challenges.

However, near complete results issued by each state showed an insurmountable lead for Biden, allowing network news channels to call the overall result, as they do every election.

For Trump, the loss comes four years after a stunning upset – when he came from behind in 2016 and outperformed the polls in a historic White House victory against the Democrats’ nominee, Hillary Clinton.

“Joe Biden has not been certified as the winner of any states, let alone any of the highly contested states headed for mandatory recounts, or states where our campaign has valid and legitimate legal challenges that could determine the ultimate victor,” the president said.

He added: “Beginning Monday, our campaign will start prosecuting our case in court to ensure election laws are fully upheld and the rightful winner is seated.”

The president has launched a series of legal battles over ballot counting in battleground states, with his campaign filing suits in Pennsylvania, Georgia, Michigan and Nevada as the states tallied votes sent by mail.

Trump, his campaign and surrogates have spread allegations of fraud in the voting and ballot counting in various states, although solid proof of it has not emerged.

It’s unclear if the president may concede immediately.

I’m honoured you chose me, Biden thanks Americans

Democrat candidate, Joe Biden, has thanked Americans for the honour to “lead our great country”.

An excited Biden tweeted on Saturday evening (Nigerian time), saying he will be president for all Americans.

He wrote, “America, I’m honoured that you have chosen me to lead our great country.

“The work ahead of us will be hard, but I promise you this: I will be a President for all Americans — whether you voted for me or not.

“I will keep the faith that you have placed in me.”

Major international and US-based TV networks projected on Saturday that the Democrat has won the US presidency over Donald Trump, a victory sealed after the Democrat claimed several key battleground states won by the Republican incumbent in 2016.

Checks by The PUNCH showed that CNN, NBC News, CBS News, BBC and Al Jazeera, amongst others, called the race in Biden’s favour, after projecting he had won the decisive state of Pennsylvania.

The media platforms reported that Biden beat Trump with a projected 284 electoral college votes to emerge the 46th president of the United States.

Biden, 77, is the oldest candidate ever elected to the White House. Trump, 74, has made as yet unsubstantiated claims of massive voter fraud, and his campaign has launched legal challenges in several states.

Biden spent eight years as vice president to Barack Obama. His victory comes in his third run for the nation’s highest office.

Obasanjo urged the newly elected President to restore confidence in the role of America as the largest economy in the world, which has a very significant responsibility for the peace, security, stability and progress of the world.”

Obasanjo in a message of congratulations by his Special Assistant Media, Kehinde Akinyemi, described the election as “a victory of good over evil” which was for most people of the world.

The former President lamented majority of global citzens had watched helplessly as the world was being pulled down.

According to him: “Not that the world was perfect and equitable but it was reasonably predictable with some measure of rule of law and respect for international agreements and treatise.”

Obasanjo, in the one page letter, said he was reasonably sure as the first Africa-America female Vice President-elect Harris “will have some Nigerian DNA in her as most of those taken to the carribean from Africa went from Nigeria of today.”

Nigerian clergyman, Chris Oyakhilome, is of the opinion that US President, Donald Trump, is hated by many in the US and the world in general because of his support for Christians and the tenets of the Christian faith.

Days after the general election held on November 3, the US is yet to declare a president. President Trump has since alleged that the electoral process was rigged and has indicated interest to challenge the process in court.

While speaking in his church on Friday, November 6, Oyakhilome said;

“There are those who think that Trump, the Presidnet of the United States, is hated by many Americans. He is not hated by Americans. I want to tell you the truth. He is not hatred, Trump is not the problem. They don’t hate Trump. They hate those that Trump seems to support.

“They are angry at Trump for supporting Christians. So the real ones they hate are you who are Christians. That is what the hatred of Trump is all about. It’s got nothing to do with Trump.

“If you are a Christian, better know this. Don’t think that if we just get Trump out of the way then everything will just calm. It will not be calm. They hate you and he seems to protect you, that is the problem.” He said.

Former vice president Atiku Abubakar has congratulated Democratic candidate, Joe Biden, on his election as the 46th President of the United States, urging him to build on the already existing US-Nigeria relations.

Atiku in a tweet on Saturday said with Biden’s election, the “great people of the United States have done the world a great service”.

The tweet reads: “I congratulate @JoeBiden on his well-deserved victory at the November 3, 2020, US elections, and look forward to the age-long collaboration of our two nations in the course of the advancement of life, liberty, and the pursuit of happiness for all peoples.

“Nigeria and the United States are two nations, divided by a common language. Indeed, the first major trip by the leader of an Independent Nigeria was the July 25, 1961, White House visit of the golden voice of Africa, the late Sir Tafawa Balewa, under President John F Kennedy.

“Nigeria and the free world, have much to learn from your victory, especially your pronouncement that you would not be a President for only those who voted for you. May such sentiments echo and reecho globally.

“Not only do I congratulate you on your victory, but I also urge you to build on US-Nigeria relations, especially on widening the African Growth and Opportunity Act (AGOA) for seamless interplay with the African Continental Free Trade Area (ACFTA).

“Only by fair trade will Africa fulfil its potential, and a prosperous Africa is good for the United States and the world.

“In electing a man rich in experience, the great people of the United States have done the world a great service, and I also look forward to your global leadership in the war on terror, and partnership with Nigeria to end the terror and poverty-related insecurities that we face.”

A stream of world leaders have congratulated President-elect Joe Biden and Vice President-elect Kamala Harris Saturday on their victory in the 2020 US presidential election, with many striking a jubilant tone on social media.

Canadian leader Justin Trudeau emphasized the close alliance between Canada and the US in his remarks.

“Our two countries are close friends, partners and allies. We share a relationship that’s unique on the world stage. I’m really looking forward to working together and building on that with you both.”

In Europe, the reactions were led by Irish politicians.

“I want to congratulate the new President Elect of the USA [Joe Biden],” Irish Prime Minister Micheál Martin tweeted after the result emerged.

Martin also referenced Biden’s Irish-American heritage, adding: “Joe Biden has been a true friend of this nation throughout his life and I look forward to working with him in the years ahead. I also look forward to welcoming him back home when the circumstances allow!”

Nigerian Billionaire and father of four, Femi Otedola, has given hint on who will take over his business when he dies.

Otedola gave the hint following a question from a follower.

See their exchange below.

@Ehixzy wrote “Who going to take care of your business when you are gone?”

Otedola replied with “Maybe you”

Recently, Otedola revealed that his friends spend up to N50 million on Champagne when they want to enjoy life.

He said this when he opened up on why he has been engaging in lots of charity work of late.

The billionaire said that the amount spent on champagne which gets passed out as waste is enough to put smiles on the faces of many people.

“In my circle of friends, many people spend up to N50 million on champagne and generally enjoy life. At the end what happens? It passes out of their bodies as waste.

“For me, therefore (and I also tell my friends), it is important to use such money to benefit others and put smiles on the faces of as many people as we can.”

Eze who joined from Queens Park Rangers just before the season began had cameo appearances at the beginning but is gradually playing himself into Roy Hodgson’s regular first eleven.

The goal is Eze’s first for the Premier League side even as he continues to replicate the stellar form that drew admiration from fans and commentators.

The 22-year-old took advantage of a foul just outside Leeds 18-yard box in the 22nd minute to put the ball beyond Illan Meslier in goal for Marcelo Bielsa’s side.

The win takes Palace to 6th on the table with 13 points from eight matches while Leeds drop further to 14th as a poor run of results continues.