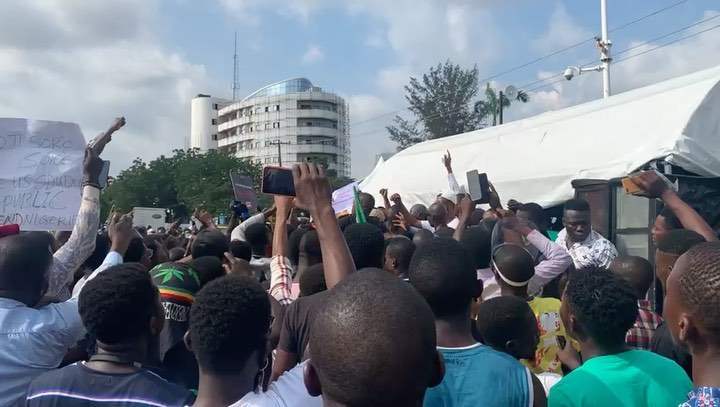 Some operatives of Ikere Division Police in Ikere-Ekiti, the headquarter of Ikere Local Government Area of Ekiti State on Saturday fled for safety when some hoodlums attacked the division.

The Nation gathered the hoodlums who stormed the station around 2 pm and damaged the building and four vehicles parked within the premises of the station.

It was learnt the hoodlums, who were victims of police unethical conduct had earlier blocked some major roads in town before invading the station.

An eyewitness told our correspondent that some of the police officers in the station took to their heels on sighting the irate hoodlums.

But, it appears the youths were not pleased with his presence at the Alausa protest ground on Sunday as they chased him from the venue.

Pasuma, who was earlier seen with a microphone addressing the crowd was later sent away as the youths said they did not want him among them.

He could not be ascertained why the Orobokibo initiator was treated in such manner.

However, while giving update on his Instagram handle, Pasuma said he… READ MORE>>>

The Inspector General of Police, IGP, Mohammed Adamu, has said operatives of the new Police Tactical Team will operate within very high professional and ethical standards, rule of law and dictates of best international policing practices, as they begin training tomorrow, Monday.

A statement by Force Public Relations, DCP Frank Mba, made the disclosure in a statement on Sunday.

He said: “In pursuant of the above objectives, the NPF is partnering with the International Committee of the Red Cross (ICRC) and other development partners for the training of the Tactical Team which commences Monday, October 19, at the Police Mobile Force (PMF) Training School, Ila Oragun, Osun State, and the PMF Training School, Ende Hills, Nasarawa State.

“The IGP reiterates that no personnel of the defunct Special Anti-Robbery Squad (SARS) will be a member the new Tactical Team.

President Muhammadu Buhari on Sunday met behind closed door with the leadership of the National Assembly at the Presidential Villa, Abuja.

DAILY POST reports that Senate President Ahmad Lawan and the Speaker of the House of Representatives, Femi Gbajabiamila represented the leadership of NASS at the meeting which was presided over by the president.

Speaking to State House correspondents at the end of the meeting, the Senate President said the meeting specifically deliberated on how best to address the ongoing End SARS demonstrations being witnessed in some parts of the country.

South West Governors have accused politicians of hijacking the #ENDSARS protests with a view to venting their frustrations on perceived opponents.

The South West Governors, who condemned the attack on Osun Governor, Gboyega Isiaka Oyetola by #EndSARS protesters in Osogbo, described it as unwarranted, misdirected and repulsive.

Chairman of the South West Governor Forum, Governor Oluwarotimi Akeredolu, in a statement in Akure, said the genuine #ENDSARS movement had a popular and receptive attitude to it by majority of Nigerians.

Akeredolu noted that policy makers have seen the protest as an opportunity to deepen concern and redirect efforts towards veritable reforms aimed at achieving positive results.

Akeredolu stated that the desirability or otherwise of the movement appeared to have come under a curious integrity test following the misdirected anger visited on Governor Oyetola.

He said the attack on Oyetola was an act of terrorism under the guise of a civil and supposedly peaceful protest that has been hijacked by criminals and hoodlums hired by politicians.

Big Brother Naija housemate Tricky Tee, has allegedly requested N500k for appearance fee, before he would attend the EndSARS protest in Bayelsa State.

Recall that the EndSARS protest has been taken place is many major cities across the country, as celebrities in Nigeria lend their voice against police brutality and reform.

However, Tricky Tee has been called out by a protester on Twitter, for allegedly asking for appearance fee before he would attend the protest in Bayelsa.

The reality star who is an indigene of Bayelsa  State, had visited his state and was welcomed by the Governor after he left the BBNaija Lockdown house this year.

Nigerians have called him out for asking for money for appearance, when other A-list celebrities are coming out to protest for free.

#EndSARS protester who was stabbed by thugs yesterday in Abuja, dies today

According to reports online, Anthony was a very active participant at the EndSARS protest since it started.

His friend announced the sad news of his death, as he mourns him on social media. He added that the victim died today, October 18 at the hospital.