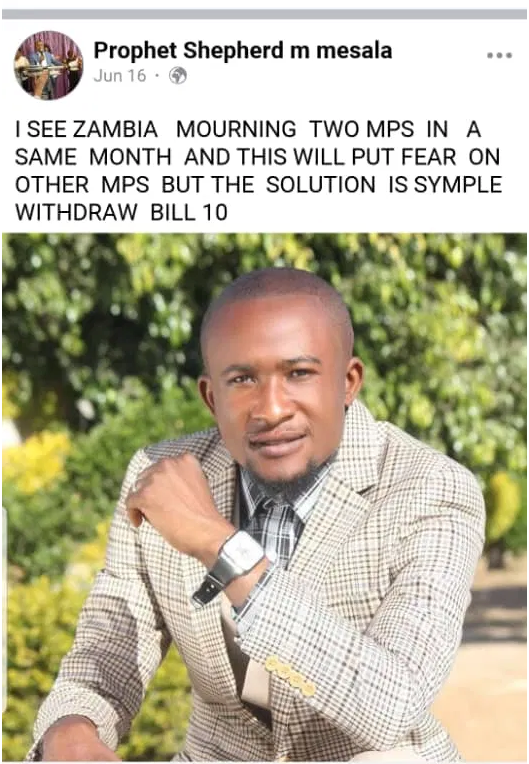 Hon. Munkonge was admitted to Levy Mwanawasa Hospital on Monday and died Saturday morning, while Hon. Rodgers Mwewa had difficulty in breathing Friday and was admitted to CFB Medical Centre in Lusaka, he was later transferred to Levy Mwanawasa Hospital but the ventilators weren’t working so he was taken to UTH where he was declared dead upon arrival.

Hon. Mukonge was an independent Member of Parliament for Lukashya Constituency in Kasama District.

Zambian flamboyant fearless general prophet Shepherd Mesala, a well known accurate prophet has put fear in members of parliament. “Politics of killing one another is not good, this has to be stopped and I am praying to expose those people practicing magic will soon be exposed and you will start seeing charms being exposed openly in parliament” says prophet Shepherd Mesala,

“This is a painful blow. We have lost two gallant men who remained loyal to their electorates and the Patriotic Front despite Hon Munkonge being an Independent MP. My deepest condolences to the Munkonge and Mwewa families and the people of both Lukashya and Mwansabombwe Constituencies.” President Lungu said.