Rochas Goes Emotional, Sings As He Receives Igbo Students In His Office (VIDEO) 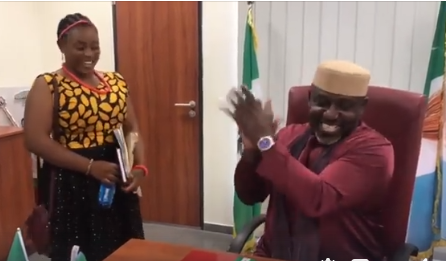 The immediate past Governor of Imo State Rochas Okorocha played host to a delegation of Igbo student resident in Jos, Plateaue State.

In his office in Abuja, Rochas, who is now the senator  representing Imo West senatorial district, received the Jos based Igbo Student’s Community who had paid the him a courtesy visit.

Rochas shared the video on his twitter page. You can watch below.

I received in audience the Igbo Students Community in Jos, the Plateau State capital.

It was an emotional meeting for me as one of the leaders of the delegation was a graduate of the @Rochas_fdn.