”Opinions are free, facts are sacred” el-Rufai Says As Real Reason Why Himself, Emir Sanusi And Fayemi Are In South Africa Emerges 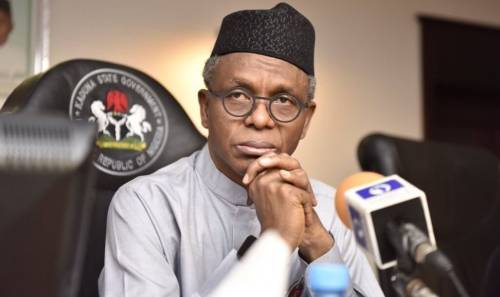 Governor Nasir el-Rufai of Kaduna State has indirectly responded to queries and bashings coming from Nigerians on why himself, governor Kayode Fayemi and Emir Sanusi are still in South Africa despite the public outcry that has greeted the xenophobic attacks in South Africa.

Nigerians had severally lashed out at them, alleging that they were actually at the World Economic Forum.

But the governor who shared a video set up by Kadaria Ahmed on twitter said her explanation partly explained the reason why himself, Emir Sanusi and the governor of Ekiti state were still in South Africa.

In the video, Kadaria Ahmed is seen explaining that although they were actually in South Africa, but not at the World Economic Forum as had been largely publicised.

Rather she explained that they were at Africa In The World Conference holding in Sterling bouch in Cape town which is quite some miles away from where the WEF conference is holding.

VIDEO: Kadaria Ahmed succinctly explains part of the reason Gov Fayemi, HRH Emir of Kaduna and Kaduna State Government officials led by me, have been in South Africa for the past week, and NOT for World Economic Forum as wrongly reported. Opinions are free, but facts are sacred! https://t.co/FyIGzvkZn8