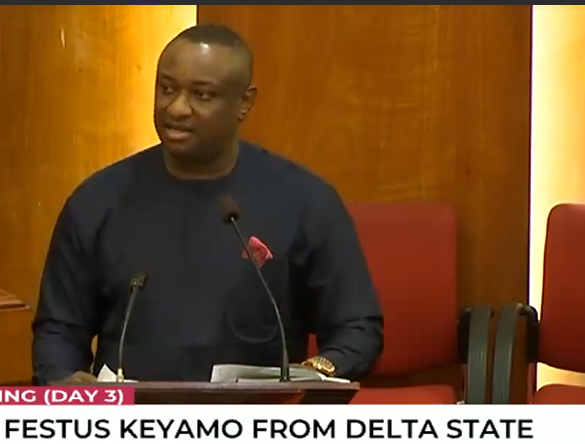 Kogi West Senator, Dino Melaye, on Friday, asked one of the ministerial nominees of President Muhammadu Buhari to recite the second stanza of Nigeria’s National Anthem.

He asked the question when Mr. Festus Keyamo appeared for screening before the senior lawmakers. His first question bothered on how to uphold the stipulations of sections 150 and 174 of the 1999 constitution.

His second question was overruled by the Senate President Ahmed Lawan while other APC lawmakers also rejected it.

“That’s not a question,” Lawan told Dino Melaye, who once appeared alongside the nominee on a Channels television before the 2019 governorship election.

He was prevented from reciting the second stanza of the Nation Anthem.

Keyamo was the Director of Strategic Communications of All Progressives Congress (APC) Campaign Council.

While he backed Buhari for issuing death threat on bollox snatchers Melaye kicked against the position of the president. The Kogi senator compared Buhari with the late African dictator, Idi Amin, and asked him to apologise to Nigerians for issuing the death threat.

During the screening, Keyamo told the Senators, “I grew up in front of the nation; everybody saw me grow. I have been restless most of those years.”

He had been counsel to some controversial figures. They include the leader of the Niger-Delta Peoples’ Volunteer Force, Mujahid Dokubo-Asari; leader of the Movement For The Actualization of the Sovereign State of Biafra (MASSOB) Ralph Uwazuruike; Stephanie Otobo, a Canadian-based singer.

One of the major legal victories he had against the Federal Government of Nigeria was in 2008 over illegal appointments of service chiefs.