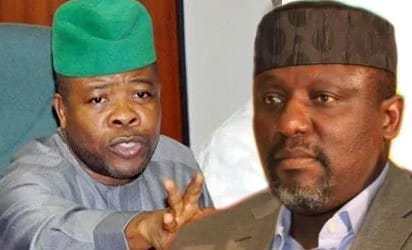 The Imo State Governor-elect, Emeka Ihedioha  has revealed  that Governor Rochas Okorocha has failed to release money for his inauguration ceremony on May 29.

In a press statement released by the, secretary of his inauguration and handover committee, Ihedioha disclosed that Okorocha has vehemently refused to finance the swearing in ceremony after initially agreeing to  a “common resolution” to work together.

The Governor-elect vehemently denied the viral rumour that Governor Okorocha had already released a whooping sum of N150m to his inauguration and handover committee.

But he disclosed that despite this set back arrangement were in full gear to organise a “world-class inauguration” to usher in a new administration in Imo State on May 29.

“Governor Rochas Okorocha has not released any money to the Emeka Ihedioha Inauguration Planning And Handover Committee,” the statement read.

“For the avoidance of doubts, Governor Rochas Okorocha and his outgoing government have not released any money to the Inauguration Planning and Handover Committee.

“The committee has not requested for any money either. Rather, the joint committee made up of the 31–member Ihediohia team and the 21–member Rochas Okorocha team met and adopted common resolutions on how best to proceed with the inauguration activities.

“Rochas Okorocha has since abandoned the mutual resolutions and proceeded with his ‘Internet-based Commissioning of Internet Sited Projects.

“Arrangements to ensure this delivery include such activities such as providing clean environments within and around event venues including the Dan Anyiam and Grass Hoppers Handball stadia.

“We can understand the frustrations of Governor Okorocha and the remnants of his e-rats, having realized that their efforts to derail the swearing-in of His Excellency, Rt. Hon Emeka Ihedioha and Hon (Engr) Gerald Irona as Imo State Governor and Deputy Governor respectively have failed woefully.”

It will be recalled that Emaka Ihedioha the flag-bearer of the Peoples Democratic Party (PDP) scored about 273, 404 votes to emerge winner of the election beating his closest opponent, Uche Nwosu , the candidate of the Action Alliance (AA).

Nwosu who is Okorocha’s son-in-law and his endorsed candidate failed in his bid to secure the gubernatorial ticket of the ruling All Progressives Congress (APC) despite all the political manipulation and permutation of Governor Okorocha. After his symbolic failure in his attempt to secure the APC’s ticket, Nwosu sumped the ruling party for the AA.